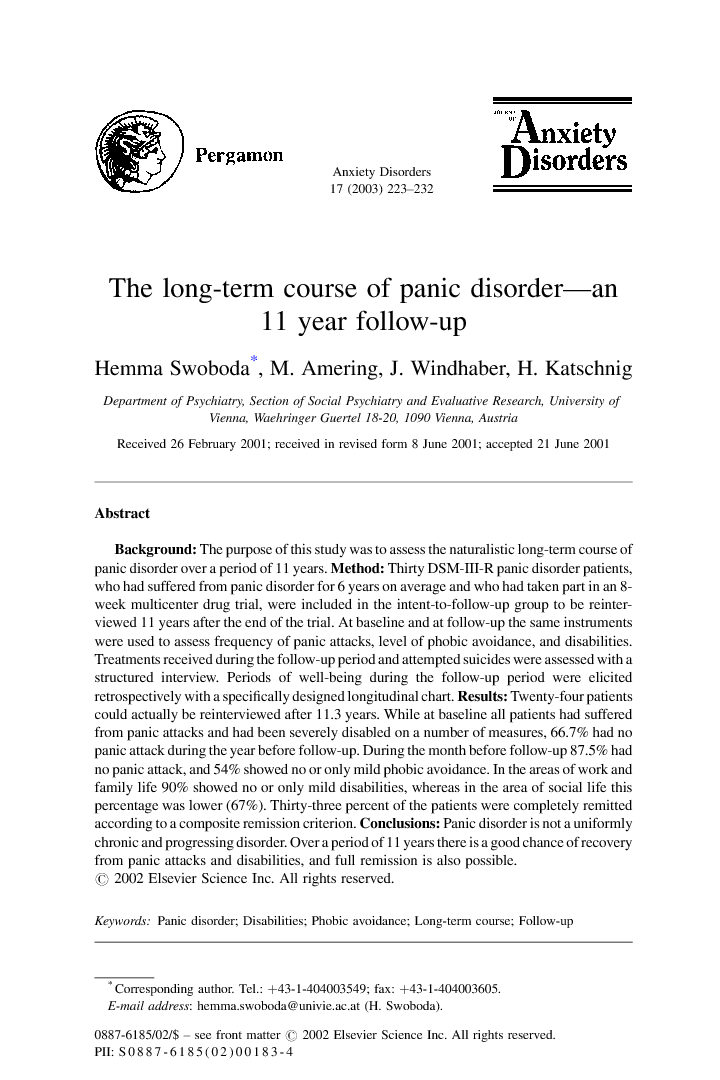 Background: The purpose of this study was to assess the naturalistic long-term course of panic disorder over a period of 11 years. Method: Thirty DSM-III-R panic disorder patients, who had suffered from panic disorder for 6 years on average and who had taken part in an 8-week multicenter drug trial, were included in the intent-to-follow-up group to be reinterviewed 11 years after the end of the trial. At baseline and at follow-up the same instruments were used to assess frequency of panic attacks, level of phobic avoidance, and disabilities. Treatments received during the follow-up period and attempted suicides were assessed with a structured interview. Periods of well-being during the follow-up period were elicited retrospectively with a specifically designed longitudinal chart. Results: Twenty-four patients could actually be reinterviewed after 11.3 years. While at baseline all patients had suffered from panic attacks and had been severely disabled on a number of measures, 66.7% had no panic attack during the year before follow-up. During the month before follow-up 87.5% had no panic attack, and 54% showed no or only mild phobic avoidance. In the areas of work and family life 90% showed no or only mild disabilities, whereas in the area of social life this percentage was lower (67%). Thirty-three percent of the patients were completely remitted according to a composite remission criterion. Conclusions: Panic disorder is not a uniformly chronic and progressing disorder. Over a period of 11 years there is a good chance of recovery from panic attacks and disabilities, and full remission is also possible.

Panic disorder is a frequent disorder with lifetime prevalence rates ranging between 1.5 and 3.5% (American Psychiatric Association, 1994). While clinical, biological, and treatment issues have been extensively studied, scientifically based knowledge about the long-term course of panic disorder and the predictors of outcome are still scanty. This is deplorable since it has been shown that panic disorder generates considerable suffering and disabilities (Leon, Shear, Portera, & Klerman, 1992), as well as enormous costs in the general health care system (Klerman, Weissman, Ouellette, Johnson, & Greenwald, 1991). No follow-up studies of persons diagnosed in population surveys as suffering from panic disorder have been carried out so far, but some data are available on the long-term course of the disorder in clinical samples. The widely held assumption that panic disorder is a progressing and unremitting condition seems to be only partly supported by such long-term empirical studies of clinical populations. Pre-DSM-III studies show that, after many years, a majority of patients experience symptomatic improvement despite absence of complete remission (Marks & Lader, 1973; Noyes, Clancy, Hoen, & Slymen, 1980). In a review of 16 follow-up studies carried out in the DSM-III era, covering a minimum period of 1 year and using multiple outcome criteria at follow-up, an average of 54% of patients were panic-free, 31% showed a remission of phobic avoidance, and 50% had no functional impairment. In other words, however, between 46 and 69% were still symptomatic or impaired (Roy-Burne & Cowley, 1995). Katschnig et al. (1995) have reported about the largest and longest (2–6 years, median 4 years) follow-up study published so far, in which 423 patients were included, who had originally participated in one of two large international multicenter drug trials (Ballenger et al., 1988 and Cross-National Collaborative Panic Study Second Phase Investigators, 1992). The main finding was that 61% of all patients were still experiencing at least occasional panic attacks at follow-up (i.e., 39% were panic-free), while far fewer suffered from phobic avoidance or disabilities in various life domains—a remarkable dissociation between panic attack frequency and other outcomes. A few potential predictors of outcome have been identified so far, including subtypes of panic disorder (uncomplicated, limited phobic avoidance, extensive phobic avoidance) and Axis I and II comorbidity (depression and personality disorders) (Katschnig & Amering, 1998 and Roy-Burne & Cowley, 1995). While these findings are of interest, they relate to rather short follow-up periods of a few years at the most. Shear (1996) has consequently pointed out that long-term outcome studies covering extensive periods are “desperately needed.” The present study covers such an extensive follow-up period. We report on a naturalistic follow-up study of panic disorder patients, with the advantage, that it covers an 11-year period, and the relative disadvantage of a rather small sample size of 30 patients.