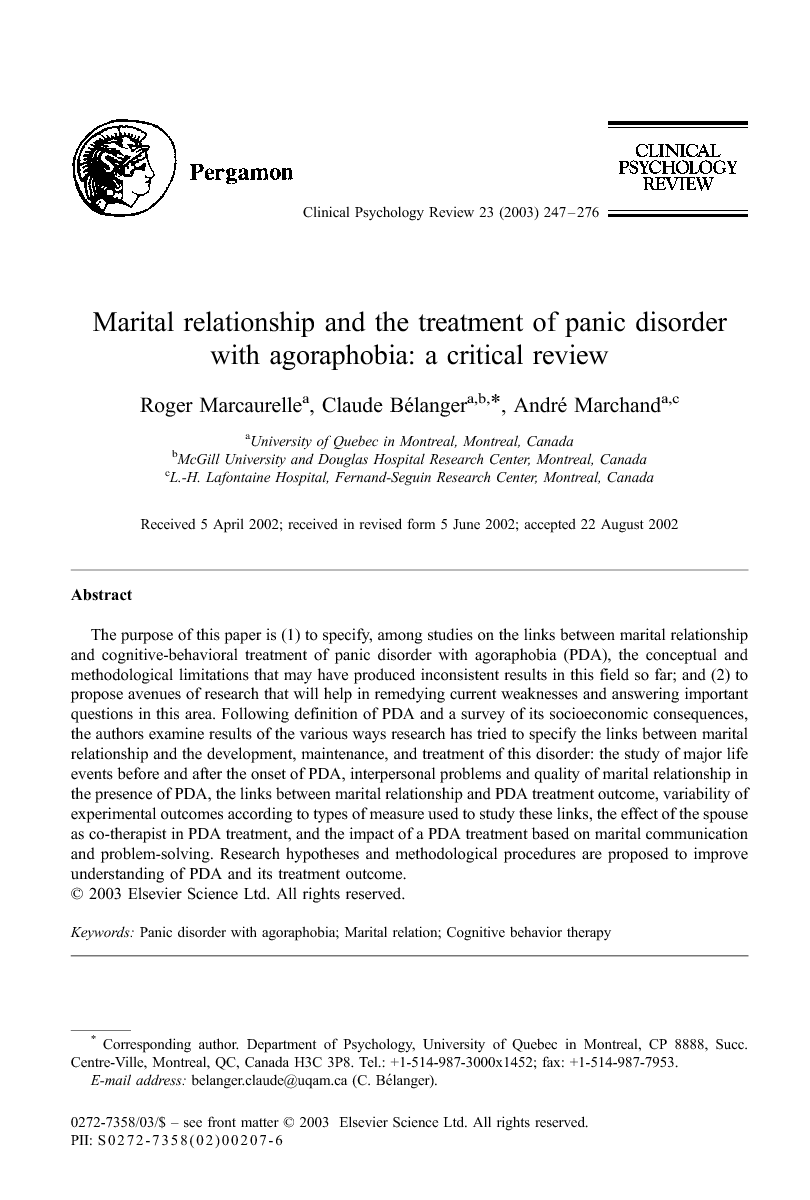 The purpose of this paper is (1) to specify, among studies on the links between marital relationship and cognitive-behavioral treatment of panic disorder with agoraphobia (PDA), the conceptual and methodological limitations that may have produced inconsistent results in this field so far; and (2) to propose avenues of research that will help in remedying current weaknesses and answering important questions in this area. Following definition of PDA and a survey of its socioeconomic consequences, the authors examine results of the various ways research has tried to specify the links between marital relationship and the development, maintenance, and treatment of this disorder: the study of major life events before and after the onset of PDA, interpersonal problems and quality of marital relationship in the presence of PDA, the links between marital relationship and PDA treatment outcome, variability of experimental outcomes according to types of measure used to study these links, the effect of the spouse as co-therapist in PDA treatment, and the impact of a PDA treatment based on marital communication and problem-solving. Research hypotheses and methodological procedures are proposed to improve understanding of PDA and its treatment outcome.

Panic disorder with agoraphobia (PDA) is a very costly psychosocial problem for individuals, families, and society (Katon, 1996). Inability to work, financial dependency, and overuse of health services by people who suffer from this anxiety disorder are markedly higher than they are, on average, for other mental disorders (Katon, 1996). It is also known that cognitive-behavioral therapy (CBT) is, as of now, the most documented and efficient intervention for PDA Clum et al., 1993 and Gould et al., 1995. Based on “in vivo” exposure, its efficacy varies between 66% (Roth & Fonagy, 1996) and 80% (Barlow & Lehman, 1996). However, if one takes into account a 6% attrition rate (Craske & Rodriguez, 1994), between 26 and 40% among participants do not feel a significant symptom reduction. In addition, only 50% of people who do not suffer from panic attacks anymore following treatment ultimately reach a level that is nearly free of all symptoms (Barlow & Brown, 1996). Moreover, in a long-term follow-up study (2–9 years), residual agoraphobic avoidance as well as personality disturbances after treatment and recovery were found to be of prognostic value in PDA relapse, whereas levels of panic, agoraphobia, and depressed mood before treatment were not (Fava, Zielezny, Savron, & Grandi, 1995). Residual symptoms therefore appear common and significant in PDA, even after treatment and remission Barlow & Lehman, 1996, Fava, 1996, Fava et al., 2001 and Noyes et al., 1996. In seeking to improve treatment of PDA, many researchers have sought to understand the role of interpersonal difficulties, more specifically, the role of marital problems in the development and maintenance of PDA. Up until now, however, studies about the role of marital relationship in the etiology and treatment of PDA are mixed and not very conclusive Bouchard et al., 1995, Carter et al., 1994 and Marchand et al., 1994. As a result, some authors proposed a new direction by investigating social support factors in general, rather than the marital relationship Carter et al., 1994 and Fokias & Tyler, 1995. Nonetheless, a consensus is emerging, suggesting that methodological and conceptual limitations have hindered reaching a satisfactory clarification of the links between marital functioning, etiology, and treatment of PDA. A recent review paper by Daiuto, Baucom, Epstein, and Dutton (1998) affords a landmark analysis of these issues. However this article has some limitations. First, in its analysis of the links between PDA etiology and marital relationship, it does not provide an overview of current theoretical models; second, it does not present a broad psychosocial context that includes studies on significant live events before onset of PDA as well as on interpersonal relationships of PDA subjects; third, it does not show an exhaustive and well-classified picture of the various concepts (marital satisfaction and adjustment) and means of assessment (self-report questionnaires, interviews, behavior coding, PDA-specific, and non-PDA-specific measures) used to study marital relationship with respect to PDA; fourth, it does not bring to light the full consequences of the data available. Further clarifying these issues could help in developing more satisfactory conclusions concerning the behavior of couples and the treatment of PDA. Therefore, the purposes of this article are to: (1) summarize results of empirical research concerning the links between marital relationship and cognitive and behavioral treatment of PDA; (2) identify the methodological and conceptual limitations that have hindered the clarification of these links; and (3) introduce methodological and heuristic avenues likely to further the understanding of these links and to improve the treatment of PDA.1

To this day, results of empirical research have remained mixed with regard to knowing: (1) whether individuals suffering from PDA have more interpersonal and marital problems than normal population; (2) whether marital communication, satisfaction, or adjustment at pretest predicts the outcome of CBT of this disorder; and (3) whether the combination of CBT with a therapy on marital communication and problem-solving reduces PDA symptoms significantly more than CBT alone. On the basis of the present literature review, as a whole, in comparison with normal participants, individuals suffering from PDA experience more major life events during the months preceding the onset of the disorder, sometimes including marital and interpersonal problems. These individuals are also affected by other types of stressors, particularly health problems, or different loss or separation experiences. In fact, whether before or after onset of PDA, agoraphobics seem to experience more interpersonal difficulties than individuals without psychological disorders. However, studies comparing the quality of marital relationship in normal individuals and people suffering from PDA are contradictory. This question remains unsolved. As suggested by Bouchard et al. (1995), efforts are needed to better understand why agoraphobics seem to have more interpersonal difficulties than normal subjects, while their marital relationship is not clearly more dysfunctional.