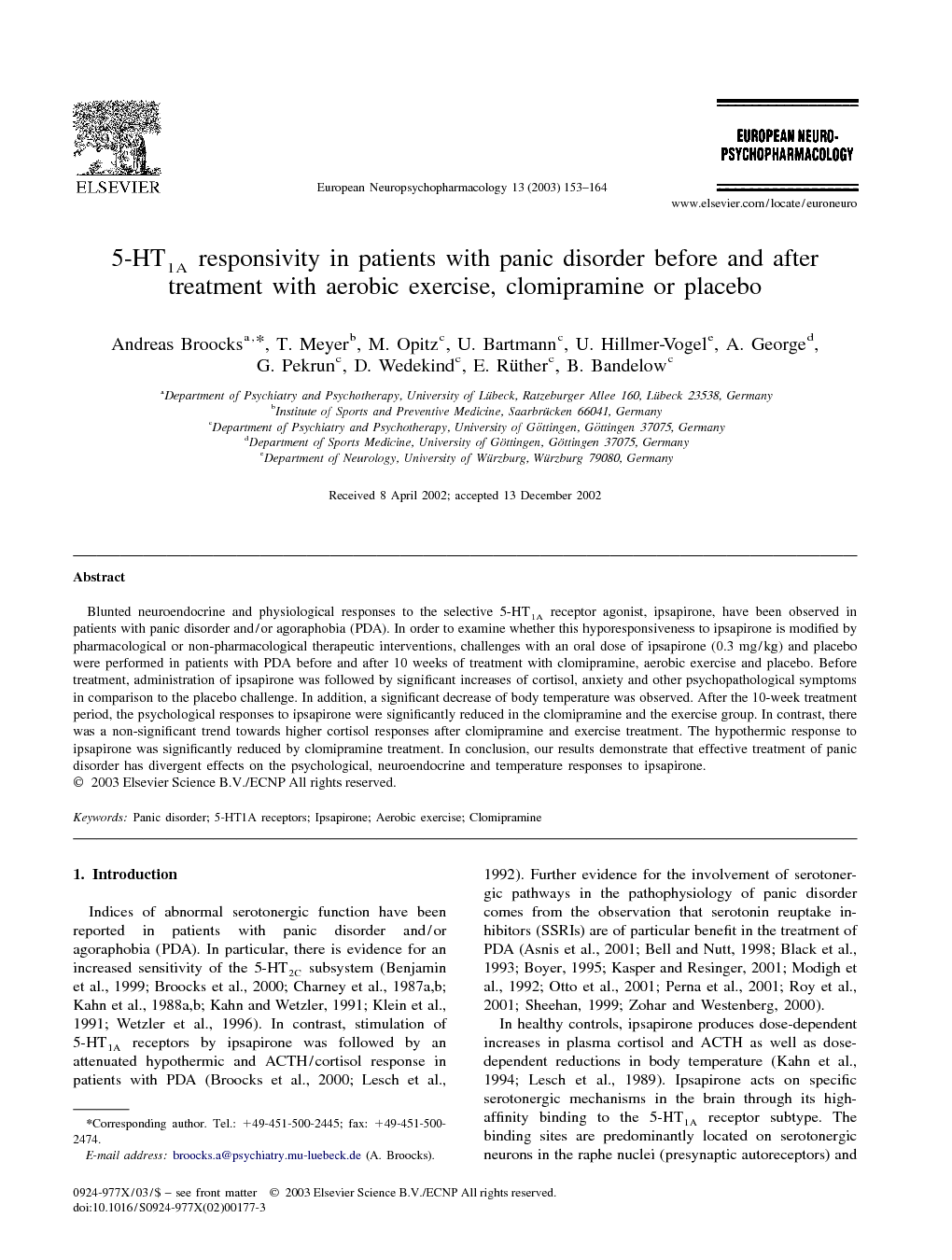 Blunted neuroendocrine and physiological responses to the selective 5-HT1A receptor agonist, ipsapirone, have been observed in patients with panic disorder and/or agoraphobia (PDA). In order to examine whether this hyporesponsiveness to ipsapirone is modified by pharmacological or non-pharmacological therapeutic interventions, challenges with an oral dose of ipsapirone (0.3 mg/kg) and placebo were performed in patients with PDA before and after 10 weeks of treatment with clomipramine, aerobic exercise and placebo. Before treatment, administration of ipsapirone was followed by significant increases of cortisol, anxiety and other psychopathological symptoms in comparison to the placebo challenge. In addition, a significant decrease of body temperature was observed. After the 10-week treatment period, the psychological responses to ipsapirone were significantly reduced in the clomipramine and the exercise group. In contrast, there was a non-significant trend towards higher cortisol responses after clomipramine and exercise treatment. The hypothermic response to ipsapirone was significantly reduced by clomipramine treatment. In conclusion, our results demonstrate that effective treatment of panic disorder has divergent effects on the psychological, neuroendocrine and temperature responses to ipsapirone.

Indices of abnormal serotonergic function have been reported in patients with panic disorder and/or agoraphobia (PDA). In particular, there is evidence for an increased sensitivity of the 5-HT2C subsystem (Benjamin et al., 1999, Broocks et al., 2000, Charney et al., 1987a, Charney et al., 1987b, Kahn et al., 1988a, Kahn et al., 1988b, Kahn and Wetzler, 1991, Klein et al., 1991 and Wetzler et al., 1996). In contrast, stimulation of 5-HT1A receptors by ipsapirone was followed by an attenuated hypothermic and ACTH/cortisol response in patients with PDA (Broocks et al., 2000 and Lesch et al., 1992). Further evidence for the involvement of serotonergic pathways in the pathophysiology of panic disorder comes from the observation that serotonin reuptake inhibitors (SSRIs) are of particular benefit in the treatment of PDA (Asnis et al., 2001, Bell and Nutt, 1998, Black et al., 1993, Boyer, 1995, Kasper and Resinger, 2001, Modigh et al., 1992, Otto et al., 2001, Perna et al., 2001, Roy et al., 2001, Sheehan, 1999 and Zohar and Westenberg, 2000). In healthy controls, ipsapirone produces dose-dependent increases in plasma cortisol and ACTH as well as dose-dependent reductions in body temperature (Kahn et al., 1994 and Lesch et al., 1989). Ipsapirone acts on specific serotonergic mechanisms in the brain through its high-affinity binding to the 5-HT1A receptor subtype. The binding sites are predominantly located on serotonergic neurons in the raphe nuclei (presynaptic autoreceptors) and in limbic structures (postsynaptic receptors). Agonistic properties at presynaptic somatodendritic sites have been observed, resulting in decreased serotonergic neurotransmission (Peroutka, 1985). Concerning the high selectivity of ipsapirone it has to be considered that its metabolite 1-(2-pyrimidinyl)-piperazine (1-PP) has been found to exert antagonistic effects at pre- and postsynaptic alpha 2-adrenoceptors (Blier et al., 1991 and Miller et al., 1992). Ipsapirone induces cortisol secretion via release of ACTH rather than by direct action on the adrenal gland (Przegalinski et al., 1989). The assumption that ipsapirone’s hypothermic effect and the stimulation of ACTH and cortisol primarily reflect 5-HT1A receptor function is also supported by the the observation that these responses can be antagonized by 5-HT1A receptor antagonists (Goodwin et al., 1987 and Hamon et al., 1987) and by recent findings confirming the utility of hypothermia as robust in-vivo probe of 5-HT1A receptor function (Cryan et al., 1999 and Oerther and Ahlenius, 2001). However, there is evidence, that the cortisol and the temperature response to ipsapirone might be mediated by different postsynaptic mechanisms (Lerer et al., 1999). So far, it has not been examined whether psychological and neuroendocrine responses to ipsapirone are modified by pharmacological and non-pharmacological therapies in patients with panic disorder. We hypothesized, that the blunted neuroendocrine and hypothermic responses to ipsapirone in panic disorder are reversed with successful treatment. Therefore, we performed neuroendocrine challenges using ipsapirone and placebo in patients with PDA before and after 10 weeks of treatment with clomipramine, aerobic exercise or placebo.