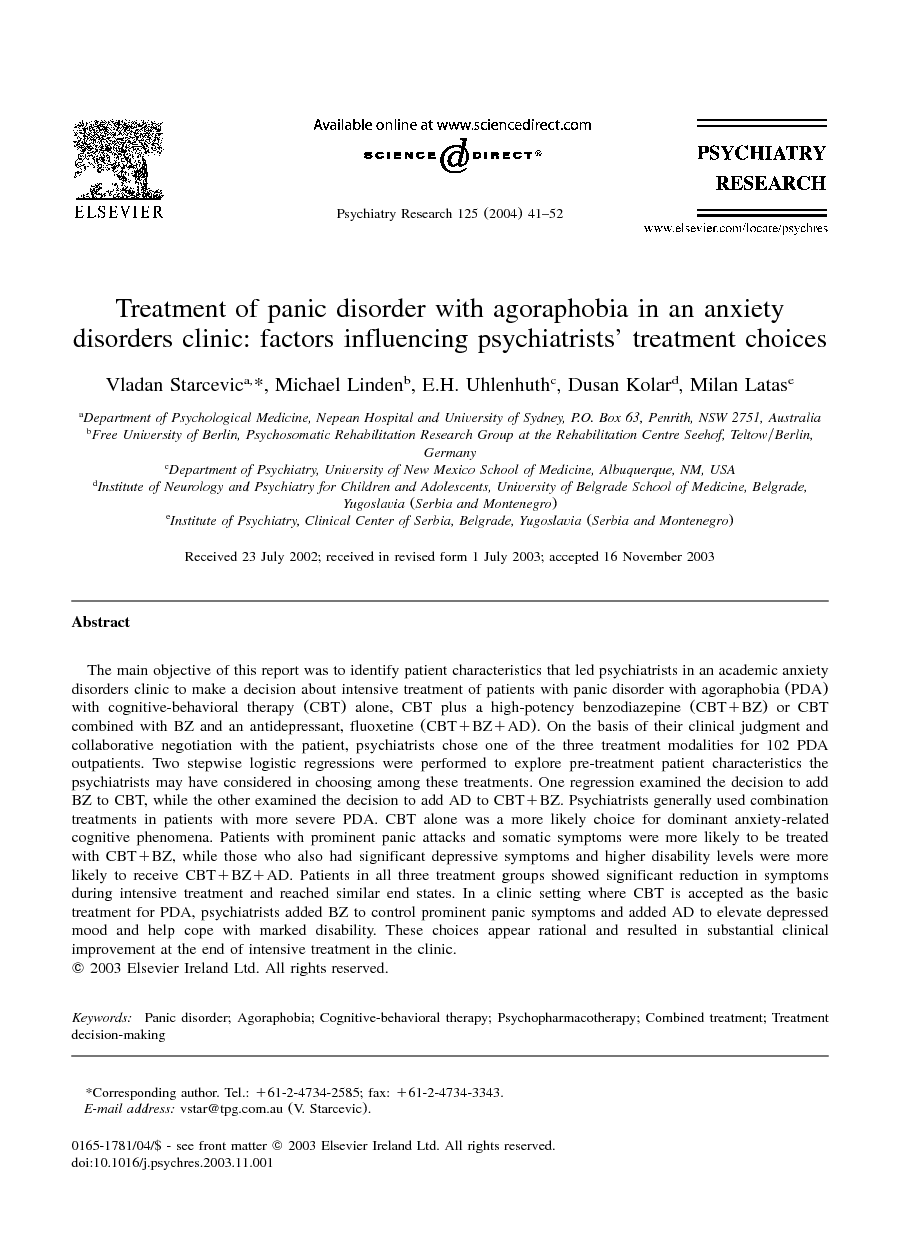 The main objective of this report was to identify patient characteristics that led psychiatrists in an academic anxiety disorders clinic to make a decision about intensive treatment of patients with panic disorder with agoraphobia (PDA) with cognitive-behavioral therapy (CBT) alone, CBT plus a high-potency benzodiazepine (CBT+BZ) or CBT combined with BZ and an antidepressant, fluoxetine (CBT+BZ+AD). On the basis of their clinical judgment and collaborative negotiation with the patient, psychiatrists chose one of the three treatment modalities for 102 PDA outpatients. Two stepwise logistic regressions were performed to explore pre-treatment patient characteristics the psychiatrists may have considered in choosing among these treatments. One regression examined the decision to add BZ to CBT, while the other examined the decision to add AD to CBT+BZ. Psychiatrists generally used combination treatments in patients with more severe PDA. CBT alone was a more likely choice for dominant anxiety-related cognitive phenomena. Patients with prominent panic attacks and somatic symptoms were more likely to be treated with CBT+BZ, while those who also had significant depressive symptoms and higher disability levels were more likely to receive CBT+BZ+AD. Patients in all three treatment groups showed significant reduction in symptoms during intensive treatment and reached similar end states. In a clinic setting where CBT is accepted as the basic treatment for PDA, psychiatrists added BZ to control prominent panic symptoms and added AD to elevate depressed mood and help cope with marked disability. These choices appear rational and resulted in substantial clinical improvement at the end of intensive treatment in the clinic.

The American Psychiatric Association's treatment guidelines for panic disorder (PD) recommend ‘with substantial clinical confidence’ either cognitive-behavioral therapy (CBT) or one of four types of medications in the treatment of PD (American Psychiatric Association, 2000, pp. 570–571). However, combined anti-panic medication and CBT ‘may be recommended on the basis of individual circumstances’ (p. 571), with these circumstances being ‘severe agoraphobia’ and ‘incomplete response to either treatment alone’ (p. 601). The guidelines summarize that it is ‘not possible to identify which patients might benefit more from combination therapy’ (p. 571), suggesting perhaps that a decision to treat PD patients with a combination of CBT and pharmacotherapy is somewhat arbitrary. Indeed, precise criteria for making treatment decisions in PD have not been established. There has been a suggestion (e.g. Emilien et al., 2002, pp. 150–153) that such decisions are often made on non-clinical grounds, which include local practices, availability of treatments and clinician or patient preferences. Thus, pharmacotherapy is usually the preferred mode of treatment in the primary care setting, while CBT is more likely to be used in the more specialized treatment settings, such as anxiety disorders clinics and centers. In some countries (e.g. Japan), benzodiazepines still seem to be prescribed for PD much more often than antidepressants (e.g. Emilien et al., 2002, pp. 152–153; Healy, 2002, p. 170), while in others (e.g. the UK), the routine use of benzodiazepines in PD is not endorsed and is usually limited to several weeks of treatment (e.g. Cookson et al., 2002, p. 167, pp. 360–361). Differences in opinion and treatment-decision practices are even more pronounced when it comes to combining pharmacotherapy and CBT in PD. On one hand, there is a general skepticism about the usefulness of this approach (e.g. Perry and Drummond, 1997 and Spiegel and Bruce, 1997), and even a view that such treatment is possibly detrimental (Westra and Stewart, 1998, Craske, 1999 and Taylor, 2000). Such a negative attitude towards combined treatment is partly based on the results of studies showing that combining CBT and medications in PD does not confer benefits over CBT alone or some components of CBT alone (Marks et al., 1983, Mavissakalian and Michelson, 1986, Echeburua et al., 1993 and Marks et al., 1993). On the other hand, surveys of international experts in 1992 and 1997 (Uhlenhuth et al., 1999) showed that a significant percentage of them favored combined pharmacotherapy and psychological therapy as an initial therapeutic strategy for PD without agoraphobia (59% in 1992 and 55% in 1997) and for agoraphobia without panic attacks (50% in 1992 and 39% in 1997). Barlow et al. (2000), in a landmark study, adduced modest evidence that combined treatment is superior to CBT or imipramine alone in PD patients with no more than mild agoraphobia. In addition, two meta-analyses of the treatment of PD with and without agoraphobia (Mattick et al., 1990 and van Balkom et al., 1997) concluded that the combination of medications and CBT might be more effective than treatments with medications or CBT alone. These differences in opinion and the consequent uncertainties leave the choice of treatment primarily to the individual clinician and his/her patient. The primary objective of this report was to identify patient characteristics that led psychiatrists working in the setting of a specialized academic clinic for anxiety disorders to select patients with PD with agoraphobia (PDA) who might benefit from different types of intensive short-term treatment. These clinicians are expected to have good clinical reasons to select certain treatments, so that the study of their strategies is one way to develop treatment rationales (Linden, 1994 and Linden, 1997). The treatments chosen were CBT alone, CBT combined with a high-potency benzodiazepine (alprazolam or clonazepam; CBT+BZ), or CBT combined with a high-potency benzodiazepine and a selective serotonin reuptake inhibitor, fluoxetine (CBT+BZ+AD). The second aim of this report was to ascertain the impact of different treatment choices after short-term treatment, while recognizing the lack of appropriate structural design for formal comparisons of effectiveness between treatments.