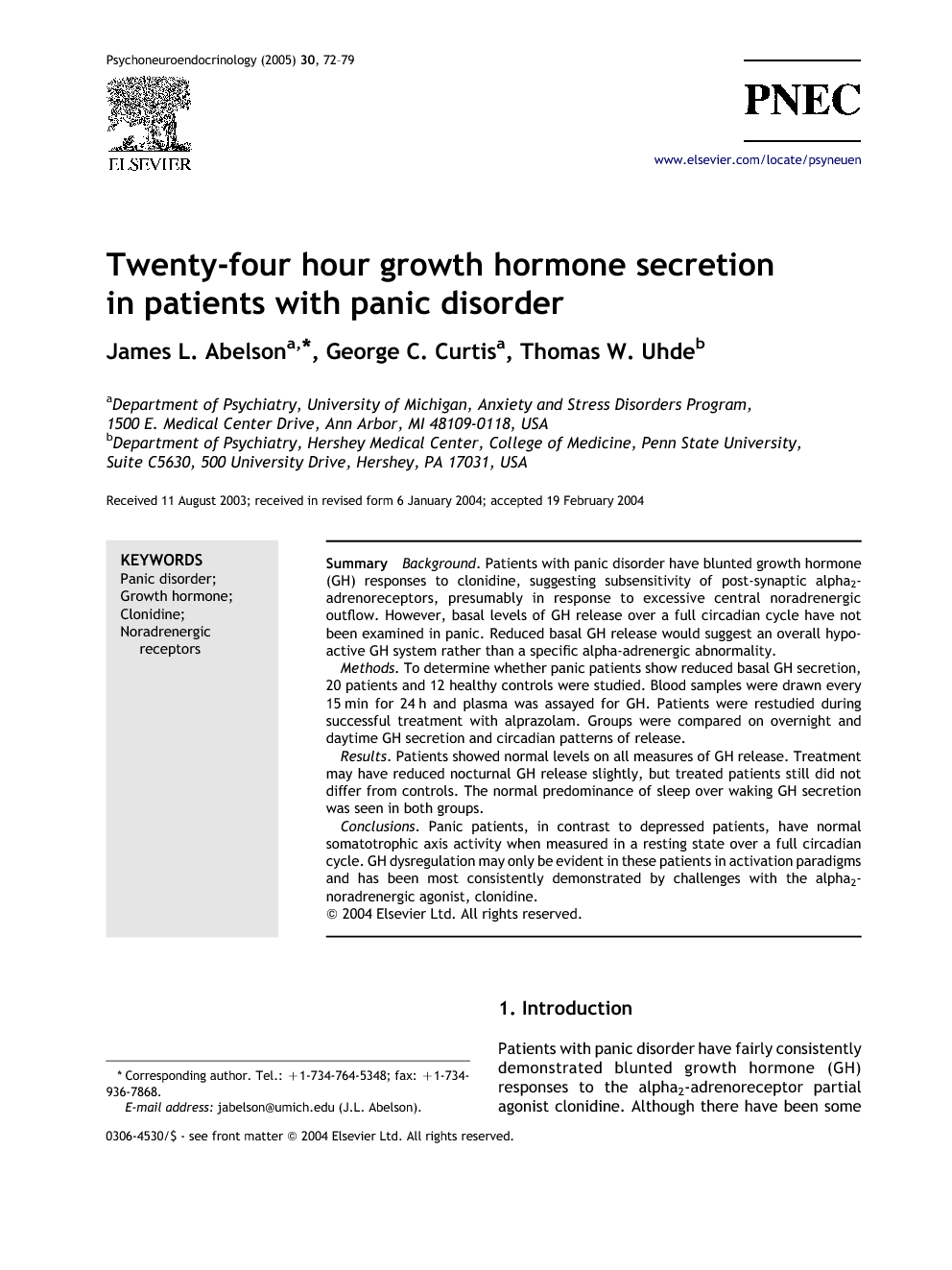 Patients with panic disorder have fairly consistently demonstrated blunted growth hormone (GH) responses to the alpha2-adrenoreceptor partial agonist clonidine. Although there have been some discrepant reports (Schittecatte et al., 1988), multiple replications make this one of the best documented neurobiologic abnormalities identified in panic disorder (Abelson et al., 1992, Brambilla et al., 1995, Charney and Heninger, 1986, Coplan, 1995, Nutt, 1989 and Uhde et al., 1986). The finding has generally been interpreted as suggesting reduced sensitivity of post-synaptic alpha2-receptors that modulate GH release (Siever et al., 1982 and Siever and Uhde, 1984). Such reduced sensitivity could occur in panic patients due to receptor down regulation in response to chronic, excessive noradrenergic outflow from the locus coeruleus (Coplan et al., 1997). This finding provides probably the most compelling evidence to date that dysregulation within the noradrenergic neurotransmitter system may play a critical role in the pathophysiology of this common and important anxiety disorder. However, patients with panic disorder also have blunted GH responses to growth hormone-releasing hormone (GHRH) (Brambilla et al., 1995, Rapaport et al., 1989 and Tancer et al., 1993), and possibly to caffeine and yohimbine (Uhde et al., 1992). These patients may have a generally hypo-active hypothalamic–pituitary somatotrophic (HPS) axis rather than a specific subsensitivity of alpha2-receptors (Uhde et al., 1992). Release of GH is primarily controlled by the balance of activation via GHRH and inhibition via somatostatin, which are in turn modulated by cholinergic and dopaminergic, as well as adrenergic inputs (Devesa et al., 1992). Blunted responses to various HPS activating agents could reflect reduced sensitivity of alpha2-receptors, but could also reflect defects in other neurotransmitter systems, via reduced input to GH release mechanisms or increased activity in the inhibitory component of the system. If there is a defect in overall secretory capacity or inhibitory activity, this should be evident in the resting state, and not only in response to receptor-specific activating agents. This appears to be the case in depression, where blunted responses to clonidine have been reported (Amsterdam et al., 1989 and Siever et al., 1982), but abnormalities in HPS activity are also seen when it is monitored in its basal state over the circadian cycle (Jarrett et al., 1990 and Mendlewicz et al., 1985). Because GH is released in discrete bursts, predominantly at night, basal activity is best assessed through monitoring over a full 24-h cycle. Such examinations of GH secretion have not yet been reported in panic disorder. To determine whether panic patients have a defect in basal GH secretory activity, we examined GH in patients and control subjects over a full circadian cycle, using frequent blood sampling to fully characterize resting activity in the HPS axis.