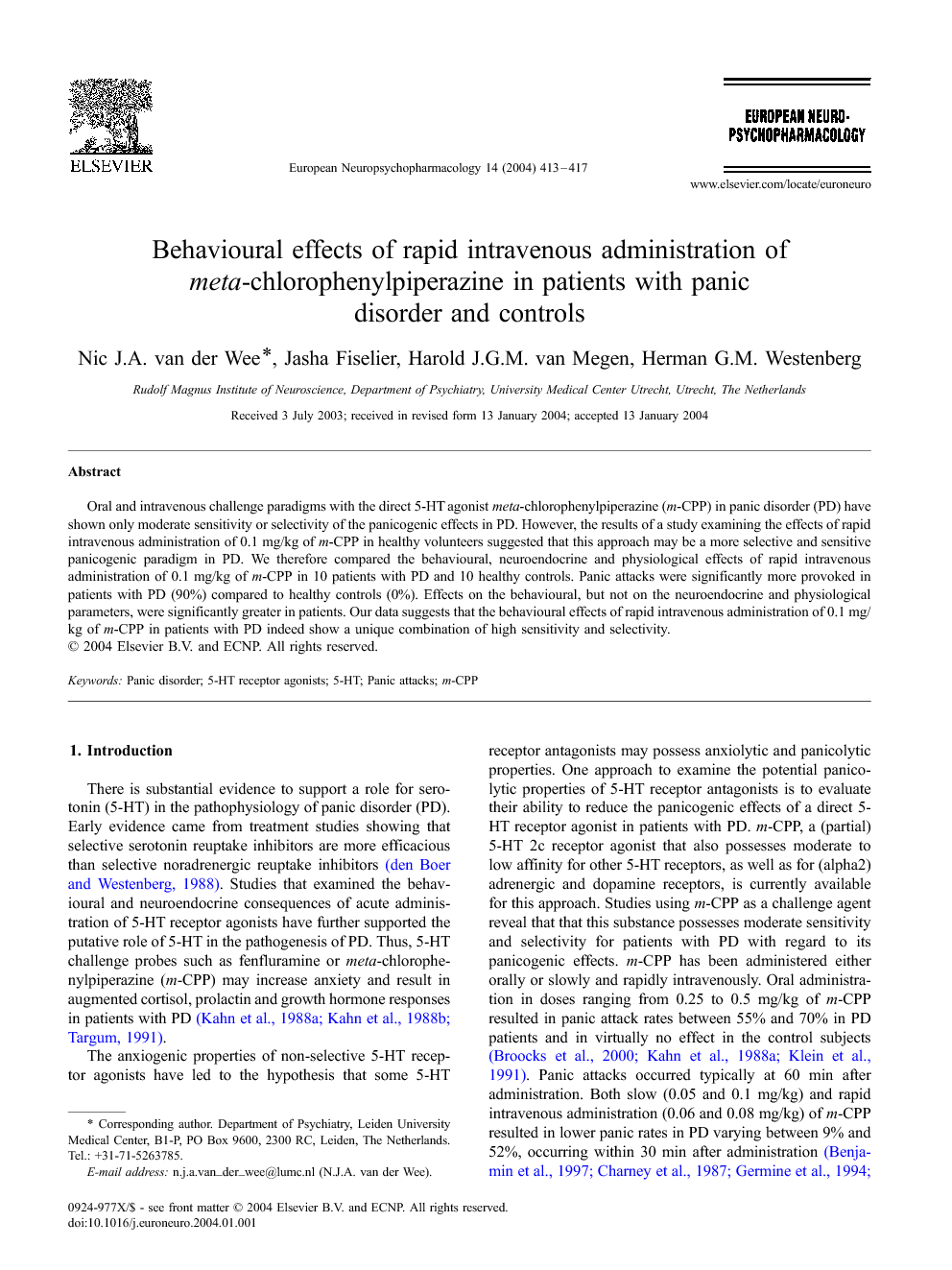 There is substantial evidence to support a role for serotonin (5-HT) in the pathophysiology of panic disorder (PD). Early evidence came from treatment studies showing that selective serotonin reuptake inhibitors are more efficacious than selective noradrenergic reuptake inhibitors (den Boer and Westenberg, 1988). Studies that examined the behavioural and neuroendocrine consequences of acute administration of 5-HT receptor agonists have further supported the putative role of 5-HT in the pathogenesis of PD. Thus, 5-HT challenge probes such as fenfluramine or meta-chlorophenylpiperazine (m-CPP) may increase anxiety and result in augmented cortisol, prolactin and growth hormone responses in patients with PD Kahn et al., 1988a, Kahn et al., 1988b and Targum, 1991. The anxiogenic properties of non-selective 5-HT receptor agonists have led to the hypothesis that some 5-HT receptor antagonists may possess anxiolytic and panicolytic properties. One approach to examine the potential panicolytic properties of 5-HT receptor antagonists is to evaluate their ability to reduce the panicogenic effects of a direct 5-HT receptor agonist in patients with PD. m-CPP, a (partial) 5-HT 2c receptor agonist that also possesses moderate to low affinity for other 5-HT receptors, as well as for (alpha2) adrenergic and dopamine receptors, is currently available for this approach. Studies using m-CPP as a challenge agent reveal that that this substance possesses moderate sensitivity and selectivity for patients with PD with regard to its panicogenic effects. m-CPP has been administered either orally or slowly and rapidly intravenously. Oral administration in doses ranging from 0.25 to 0.5 mg/kg of m-CPP resulted in panic attack rates between 55% and 70% in PD patients and in virtually no effect in the control subjects Broocks et al., 2000, Kahn et al., 1988a and Klein et al., 1991. Panic attacks occurred typically at 60 min after administration. Both slow (0.05 and 0.1 mg/kg) and rapid intravenous administration (0.06 and 0.08 mg/kg) of m-CPP resulted in lower panic rates in PD varying between 9% and 52%, occurring within 30 min after administration Benjamin et al., 1997, Charney et al., 1987, Germine et al., 1994 and Wetzler et al., 1996. Thus, sensitivity and selectivity of the behavioural effects following m-CPP administration seem to depend in part on the route and speed of administration. Murphy et al. (1989) performed a direct comparison of the effects of intravenous and oral m-CPP administration in healthy controls. They studied the effects of rapid intravenous administration of 0.1 mg/kg of m-CPP in 90 s and oral administration of 0.5 mg/kg of m-CPP. Increases in measures of anxiety were seen following the intravenous approach only, but panic attacks were not observed following either route of administration. In addition, both oral and intravenous administration resulted in similar increases in cortisol, prolactin and growth hormone. The mean plasma levels of m-CPP did not differ between the two routes of administration, but there was a twofold higher plasma peak level following the intravenous approach. These findings suggest a relationship between the peak plasma levels of m-CPP and the occurrence of behavioural responses in healthy subjects. Although previous intravenous m-CPP challenge paradigms in general show a low sensitivity and selectivity with regard to the panicogenic properties in PD, the findings of Murphy et al. (1989) in healthy controls suggest that a possible stronger and more selective behavioural effect may be obtained after rapid intravenous administration of 0.1 mg/kg of m-CPP. We decided to further explore the characteristics of intravenous administration of 0.1 mg/kg of m-CPP in 90 s as a possible model to evaluate the panicolytic properties of a novel 5-HT receptor antagonist in patients with PD.