عنوان انگلیسی
Voluntary hyperventilation in the treatment of panic disorder—functions of hyperventilation, their implications for breathing training, and recommendations for standardization
دانلود فوری مقاله + سفارش ترجمه 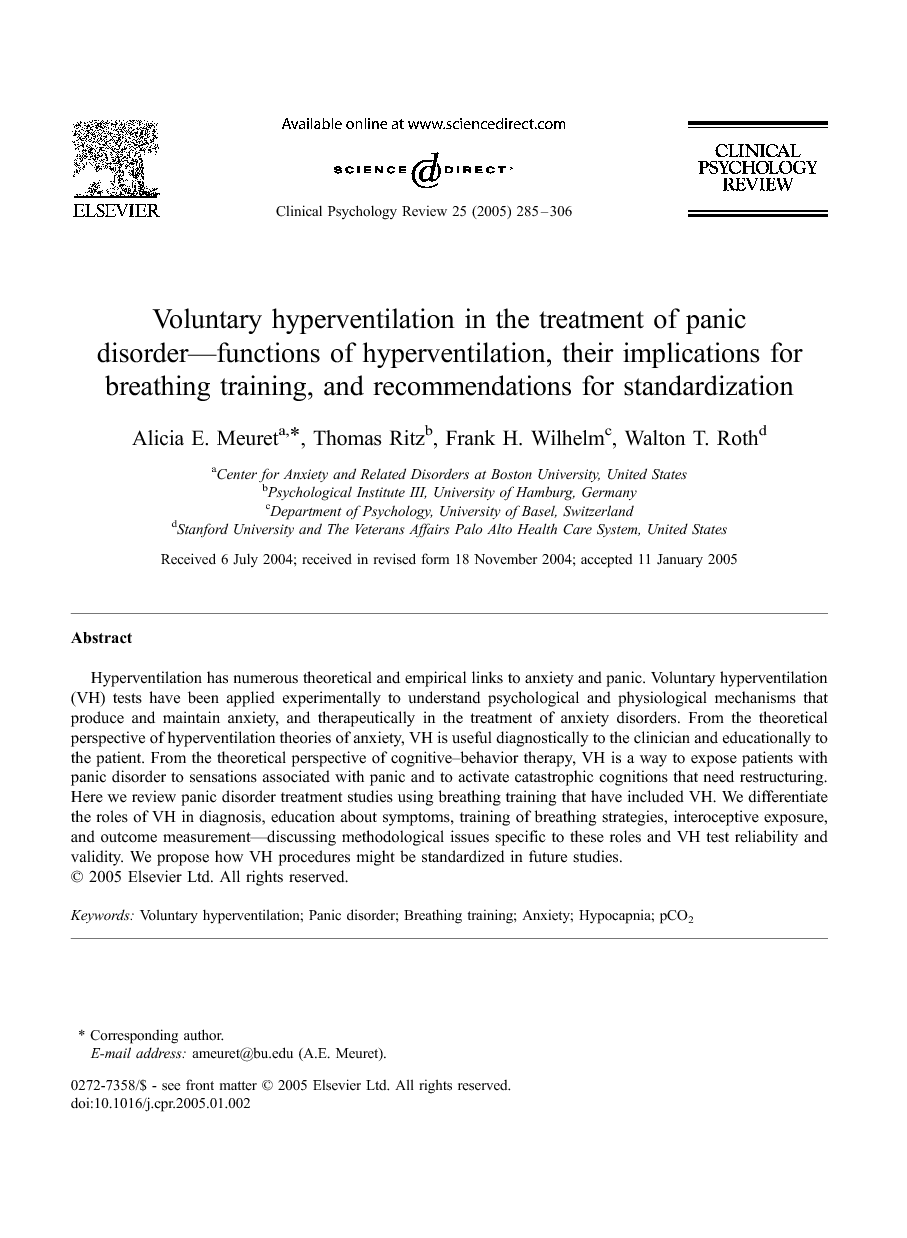 Hyperventilation has numerous theoretical and empirical links to anxiety and panic. Voluntary hyperventilation (VH) tests have been applied experimentally to understand psychological and physiological mechanisms that produce and maintain anxiety, and therapeutically in the treatment of anxiety disorders. From the theoretical perspective of hyperventilation theories of anxiety, VH is useful diagnostically to the clinician and educationally to the patient. From the theoretical perspective of cognitive–behavior therapy, VH is a way to expose patients with panic disorder to sensations associated with panic and to activate catastrophic cognitions that need restructuring. Here we review panic disorder treatment studies using breathing training that have included VH. We differentiate the roles of VH in diagnosis, education about symptoms, training of breathing strategies, interoceptive exposure, and outcome measurement—discussing methodological issues specific to these roles and VH test reliability and validity. We propose how VH procedures might be standardized in future studies.

Hyperventilation has a long history of being linked to anxiety. Breathing-related symptoms such as dyspnea,1 shortness of breath, or feelings of suffocation are central features of the experience of panic. This is reflected in the criteria for panic disorder in the Statistical Manual for Psychiatric Disorders (DSM-IV; American Psychiatric Association, 1994). Additional symptoms on this list are dizziness and tingling sensations in the extremities, both of which are typically produced by hyperventilation-induced alkalosis.2 Subjective anxiety has been associated with hyperventilation3 both in individuals suffering from anxiety disorders and in those who do not (e.g., Rapee & Medoro, 1994 and Rapee et al., 1992). These links have motivated researchers to examine in a variety of experimental subjects what happens when hypocapnia4 is produced by voluntary hyperventilation (VH) (Antony et al., 1997, Gorman et al., 1994, Holt & Andrews, 1989, Nardi et al., 2001, Papp et al., 1997, Spinhoven et al., 1992 and Wilhelm et al., 2001). Two prominent psychophysiological models of panic, the hyperventilation model and the false suffocation alarm model, have assigned to abnormalities in respiratory gas exchange a central role in the development of panic and its maintenance (see Roth et al., in press and Smoller et al., 1996, for a review). The hyperventilation model of panic disorder (PD) assumes that at some time in the learning history of the patient, symptoms elicited by hyperventilation led to fear that in turn fuelled further hyperventilation, creating a vicious circle spiraling upwards to panic ( Ley, 1985). Although it has been difficult to prove the etiological role of hyperventilation in panic ( Roth, Wilhelm, Pettit & Meuret, in press), a number of findings support its relevance. These include lower basal pCO2 5 levels (e.g., Papp et al., 1997, Roth et al., 1998 and Salkovskis et al., 1986), stronger psychological response to VH (e.g., Antony et al., 1997, Gorman et al., 1994 and Holt & Andrews, 1989), and slower recovery from VH ( Gorman et al., 1988, Maddock & Carter, 1991 and Wilhelm et al., 2001) in patients suffering from PD compared to healthy controls. Respiratory abnormalities such as disorganized breathing patterns or frequent sighing have also been observed in individuals with panic disorder ( Abelson et al., 2001, Martinez et al., 1996 and Stein et al., 1995). A specificity of these abnormalities for panic and not other anxiety disorders was evidenced in some studies (e.g., Wilhelm et al., 2001, Wilhelm et al., 2001a and Wilhelm et al., 2001b). However, not all results support the hyperventilation model. Hypocapnia can be absent in individuals with panic disorder during baselines6 (Holt & Andrews, 1989 and Woods et al., 1986), and even during naturally occurring panic attacks (Garssen et al., 1996 and Hibbert & Pilsbury, 1988). Van den Hout et al. (1992) observed hypocapnia at baseline with further decreases during an exciting film or fearful imagery in both persons with PD and non-PD anxiety disorder patients and these levels corresponded to levels of subjective distress, as compared to healthy controls. They interpreted the changes in end-tidal pCO27 as an effect of fear or excitement rather than their cause. A general conclusion from the experiments cited above is that hyperventilation, if present, is not specific to PD patients.

Our review of BT studies in panic disorder has uncovered many uncertainties about the use of VH, some of which are due to the lack of a common reporting standard for VH procedures. Conceptually, a number of different roles have been assigned to VH in BT or in control interventions for BT studies—roles that are sometimes in conflict. Applying VH as a diagnostic tool or as an outcome measure is complicated by the reduction of self-reported responses, and possibly also of physiological responses, when VH is repeated. Test standardization depends ultimately on establishing that when VH is conducted in a specified way, certain response measures meet basic psychometric criteria of reliability and validity. Important evidence of validity is the ability of the test to predict which patients will benefit from which therapy, and whether improvement from a specific therapy will be sustained at follow-up. We have made some tentative suggestions about plausible parameters for VH in testing and therapy, and for assessment of responses to it. Specification and recording of physiological respiratory parameters are as essential as specification and recording of self-report.