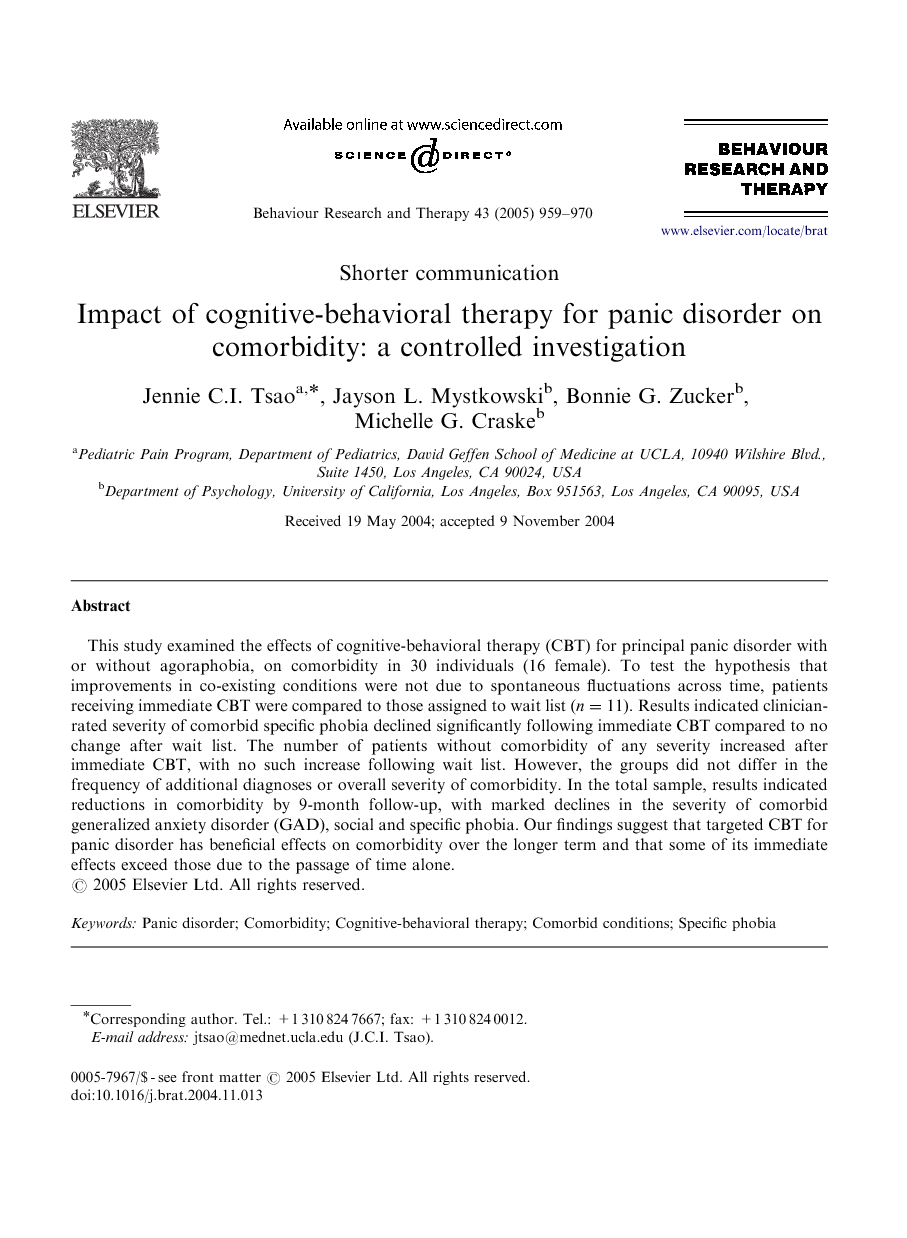 This study examined the effects of cognitive-behavioral therapy (CBT) for principal panic disorder with or without agoraphobia, on comorbidity in 30 individuals (16 female). To test the hypothesis that improvements in co-existing conditions were not due to spontaneous fluctuations across time, patients receiving immediate CBT were compared to those assigned to wait list (n=11n=11). Results indicated clinician-rated severity of comorbid specific phobia declined significantly following immediate CBT compared to no change after wait list. The number of patients without comorbidity of any severity increased after immediate CBT, with no such increase following wait list. However, the groups did not differ in the frequency of additional diagnoses or overall severity of comorbidity. In the total sample, results indicated reductions in comorbidity by 9-month follow-up, with marked declines in the severity of comorbid generalized anxiety disorder (GAD), social and specific phobia. Our findings suggest that targeted CBT for panic disorder has beneficial effects on comorbidity over the longer term and that some of its immediate effects exceed those due to the passage of time alone.

Comorbidity refers to the co-occurrence of two or more psychological disorders and is common in panic disorder. Roughly 50–80% of patients with a principal diagnosis of panic disorder meet criteria for at least one other current Axis I disorder, most typically other anxiety or mood disorders (e.g., Pollack et al., 1990; Starcevic, Uhlenhuth, Kellner, & Pathak, 1992; Tsao, Lewin, & Craske, 1998; Brown, Antony, & Barlow, 1995; Sanderson, Di Nardo, Rapee, & Barlow, 1990). Examination of the effects of targeted cognitive-behavioral therapy (CBT) for principal panic disorder on comorbidity has clear implications for treatment planning and implementation since the current healthcare environment demands that treatment be delivered in the least expensive, most efficient way possible. Thus, if CBT alleviates not only the targeted disorder, but also “untargeted” comorbid conditions, the most cost-effective approach would be to treat only the principal disorder initially rather than attempt to individually treat all co-occurring disorders. To date, the impact of CBT for panic disorder on additional diagnoses has received relatively little attention, and results from the small number of existing studies have been mixed. One study found significant reductions in depressive symptoms after CBT for panic disorder (Laberge, Gauthier, Cote, Plamondon, & Cormier, 1993), and in two studies, we found significant decreases in the frequency and severity of comorbidity following CBT for principal panic disorder (Tsao et al., 1998; Tsao, Mystkowski, Zucker, & Craske, 2002). In the first study, rates of comorbid diagnoses fell from 63.6% at pre-treatment to 27.3% at post-treatment, with the greatest declines in comorbid social phobia and generalized anxiety disorder (GAD). In the second study, patients with at least one additional diagnosis declined from 60.8% at pre-treatment, to 37.3% at post-treatment, and 35.3% at follow-up. Severity of comorbid GAD, depression, and specific phobia also declined significantly following treatment. On the other hand, Brown et al. (1995) found that, with the exception of comorbid GAD, post-treatment reductions in comorbid diagnoses following CBT for panic disorder were largely reversed by 24-month follow-up. Woody, McLean, Taylor, and Koch (1999) reported that improvements in comorbid major depressive disorder (MDD) among patients administered CBT for panic disorder were comparable to a MDD only no-treatment control group. It is possible however, that CBT may have produced better outcome with the more appropriate control group comorbid for panic disorder and MDD. Moreover, this study excluded panic disorder patients with comorbid diagnoses other than MDD, which may limit generalizability. Few studies have utilized appropriate control groups to determine whether reductions in comorbidity following targeted CBT are due to treatment effects or spontaneous fluctuations across time. Thus, we compared changes in comorbidity across a wait list period to changes in comorbidity immediately after treatment to test the hypothesis that CBT for principal panic disorder will lead to decreased frequency and severity of comorbid conditions, and that these effects would be maintained at 9-month follow-up. We secondarily investigated patterns of baseline comorbidity, as well as the relationships between pre-treatment comorbidity and severity of panic disorder, and the impact of comorbidity on treatment outcome for panic disorder.