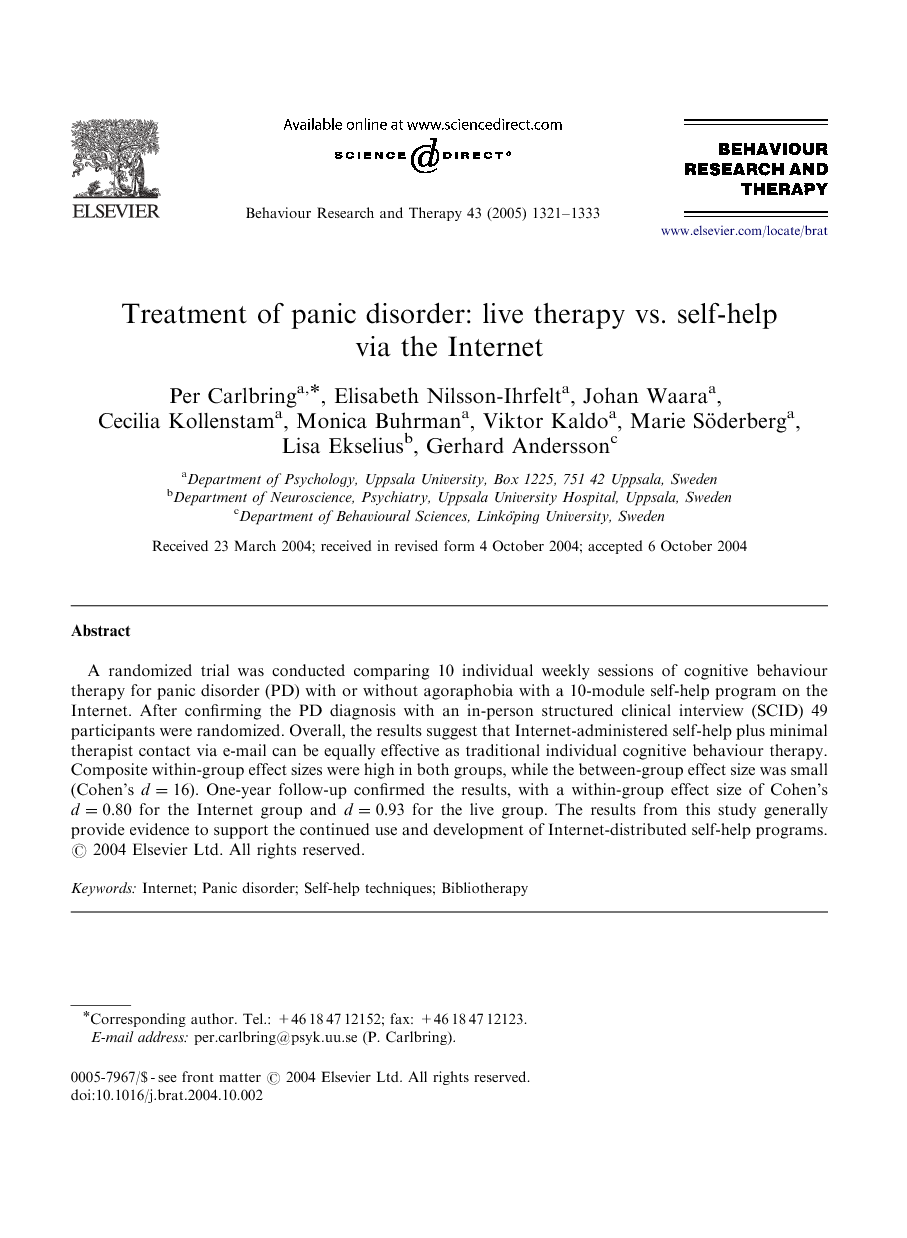 A randomized trial was conducted comparing 10 individual weekly sessions of cognitive behaviour therapy for panic disorder (PD) with or without agoraphobia with a 10-module self-help program on the Internet. After confirming the PD diagnosis with an in-person structured clinical interview (SCID) 49 participants were randomized. Overall, the results suggest that Internet-administered self-help plus minimal therapist contact via e-mail can be equally effective as traditional individual cognitive behaviour therapy. Composite within-group effect sizes were high in both groups, while the between-group effect size was small (Cohen's d=16d=16). One-year follow-up confirmed the results, with a within-group effect size of Cohen's d=0.80d=0.80 for the Internet group and d=0.93d=0.93 for the live group. The results from this study generally provide evidence to support the continued use and development of Internet-distributed self-help programs.

Panic disorder (PD) with or without agoraphobia is associated with substantial impairment in quality of life (Massion, Warshaw, & Keller, 1993) and is fairly prevalent (Carlbring, Gustafsson, Ekselius, & Andersson, 2002). As evidenced by several trials there are highly effective treatments for PD (Taylor, 2000). However, only about 25% seek any kind of treatment (Lidren et al., 1994). Barriers to accessing expert assistance include shortage of skilled therapists, long waiting lists, and cost (National Institute of Health, 1991). These barriers particularly disadvantage geographically isolated people such as those in regional and rural areas where travelling time is an added burden (Richards, Klein, & Carlbring, 2003). Another problem is that those with agoraphobia may not seek therapy due to fear of leaving their homes or travelling certain distances (Newman, Erickson, Przeworski, & Dzus, 2003). A major challenge therefore is to increase the accessibility and affordability of evidence-based psychological treatments. Printed self-help manuals have been developed to assist people with mental health problems who are unwilling or unable to access professional assistance although until recently, there has been little evaluation of their efficacy (Kurtzweil, Scogin, & Rosen, 1996; Rosen, Glasgow, & Moore, 2003). Recent reviews (e.g., Carlbring, Westling, & Andersson, 2000) suggest that CBT-based bibliotherapy for PD can be effective, with a medium to large effect size (ranging from d=0.5d=0.5 to 1.5). A modern alternative to printed self-help manuals is computers (King & Moreggi, 1998; Smith & Senior, 2001). Computerized programs have been used for a number of years for assessment, diagnosis, and education (Newman, Consoli, & Taylor, 1997), but most controversial has been their use for psychological treatment (Proudfoot et al., 2003). Until recently, computer mediated therapies have often been offered without any patient–therapist interaction (Marks, Shaw, & Parkin, 1998). However, there now seems to have been a shift towards using the World Wide Web (WWW; Ritterband et al., 2003), to administer self-help treatment instructions, in conjunction with some sort of text-based human interaction (e.g., e-mail). However, there is not yet any golden standard for the delivery of these novel minimal therapist contact therapies (Ragusea & VandeCreek, 2003). In an attempt to provide a cost-effective treatment for PD, two research groups have independently developed separate Internet-delivered self-help programs and provided minimal therapist contact via e-mail or telephone (Carlbring, Ekselius, & Andersson, 2003; Carlbring, Westling, Ljungstrand, Ekselius, & Andersson, 2001; Richards & Alvarenga, 2002). The programs have been evaluated in randomized controlled trials which showed that the participants generally achieved significant improvement in diary measurements of frequency of panic attacks, total intensity of each attack, total duration of each attack, and daily anxiety (Richards et al., 2003). Moreover, bodily sensations associated with the arousal accompanying anxiety were reduced, as well as anticipatory and catastrophic thoughts, agoraphobic avoidance, severity of anxiety symptoms, and depression. Finally, perceived life satisfaction was increased following treatment. The results from these experiments generally provide evidence to support the continued use and development of self-help programs for PD distributed via the Internet. However, there has to our knowledge never been a direct comparison between an Internet-delivered self-help program and traditional CBT. The aim of this study was to compare the two formats of panic treatment. Given that both treatments have been evaluated in separate controlled trials with untreated waiting list controls without any improvement in the waiting-list group, we decided not to include a no-treatment control group.