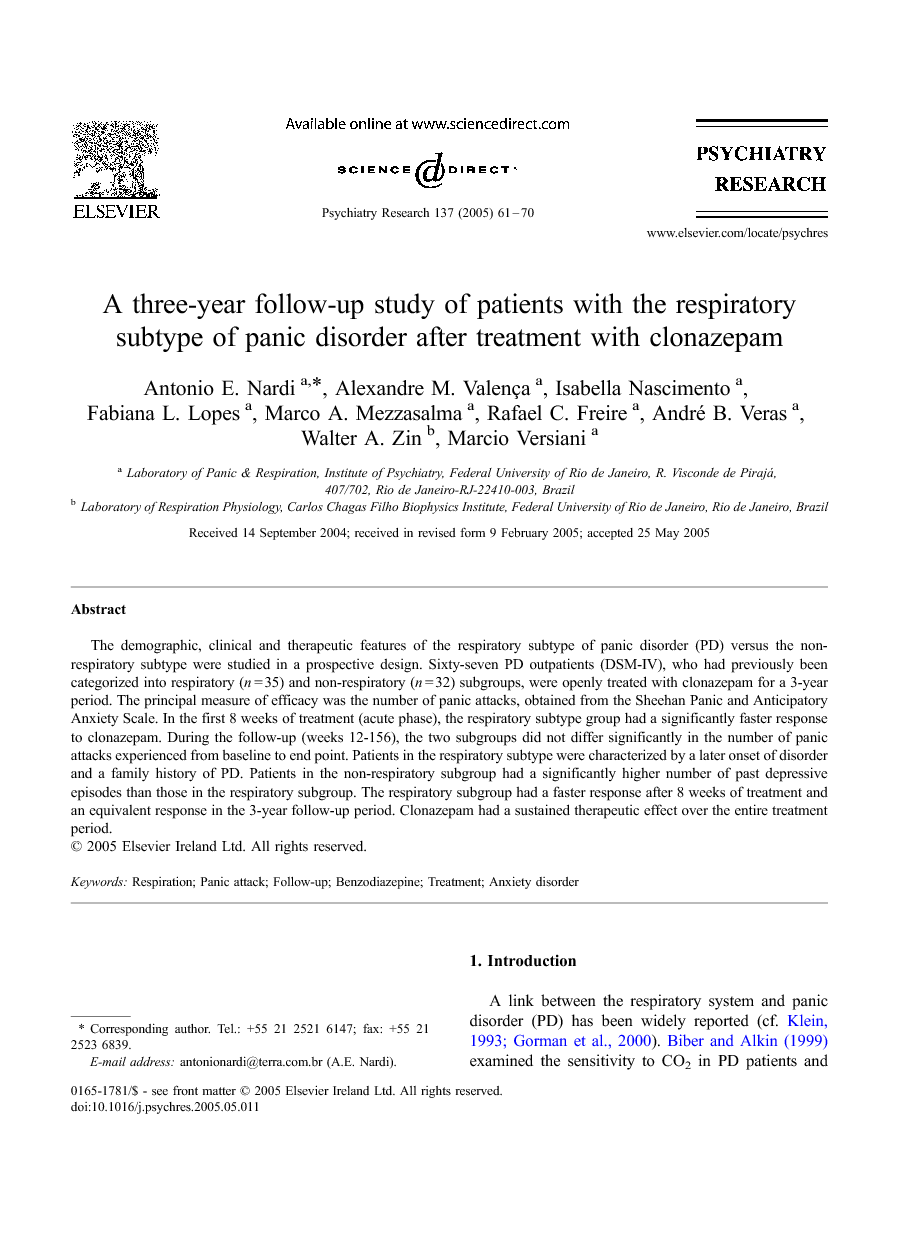 A link between the respiratory system and panic disorder (PD) has been widely reported (cf. Klein, 1993 and Gorman et al., 2000). Biber and Alkin (1999) examined the sensitivity to CO2 in PD patients and proposed two subtypes of the disorder defined by differential responses to CO2 challenge. Patients who showed prominent respiratory symptoms were more sensitive to CO2 challenge, had a significantly longer illness duration, had more severe panic and phobic symptoms, and were more likely to be heavy smokers than were patients without respiratory symptoms. The choice of an optimal treatment for PD depends on a number of issues, including adverse effects, efficacy, and presence of concomitant syndromes. It is crucial to provide a risk-benefit assessment before treating each patient (Gorman, 1997 and Sheehan, 1999). The subtype of PD can also influence therapeutic response (Nardi et al., 2003 and Valença et al., 2003). Although many treatment options are effective in PD, the efficacy of clonazepam, a high-potency benzodiazepine with anticonvulsant and anxiolytic properties, was first noted in the 1980s and the early 1990s by Chouinard and Rosenbaum and their collaborators (for review, see Rosenbaum, 2004), and its effectiveness in PD has been confirmed in later studies (Valença et al., 2003). In addition to clonazepam's activation of the benzodiazepine-GABA receptor complex, clonazepam, unlike many other benzodiazepines, appears to have serotoninergic activity, which contributes to its psychotropic and antimyoclonic effects (Moroz, 2004). Our group has been studying the therapeutic response to clonazepam and other medications in PD subtypes (Nardi et al., 2003 and Valença et al., 2003). In a retrospective 6-week comparison of clonazepam versus placebo (Valença et al., 2003), we found no significant differences in therapeutic response between respiratory and non-respiratory subgroups of PD. In a prospective analysis of a 1-year open trial with nortriptyline, the respiratory PD subtype had a faster response to treatment than did the non-respiratory subtype and an equivalent response after 1 year of treatment (Nardi et al., 2003). The present study extends our previous reports by examining the demographic, clinical and therapeutic features of patients with the respiratory PD subtype who had been treated for a 3-year period in the Laboratory of Panic & Respiration in Rio de Janeiro, Brazil. The respiratory subgroup was compared with a non-respiratory PD subgroup. All patients were openly treated with clonazepam.