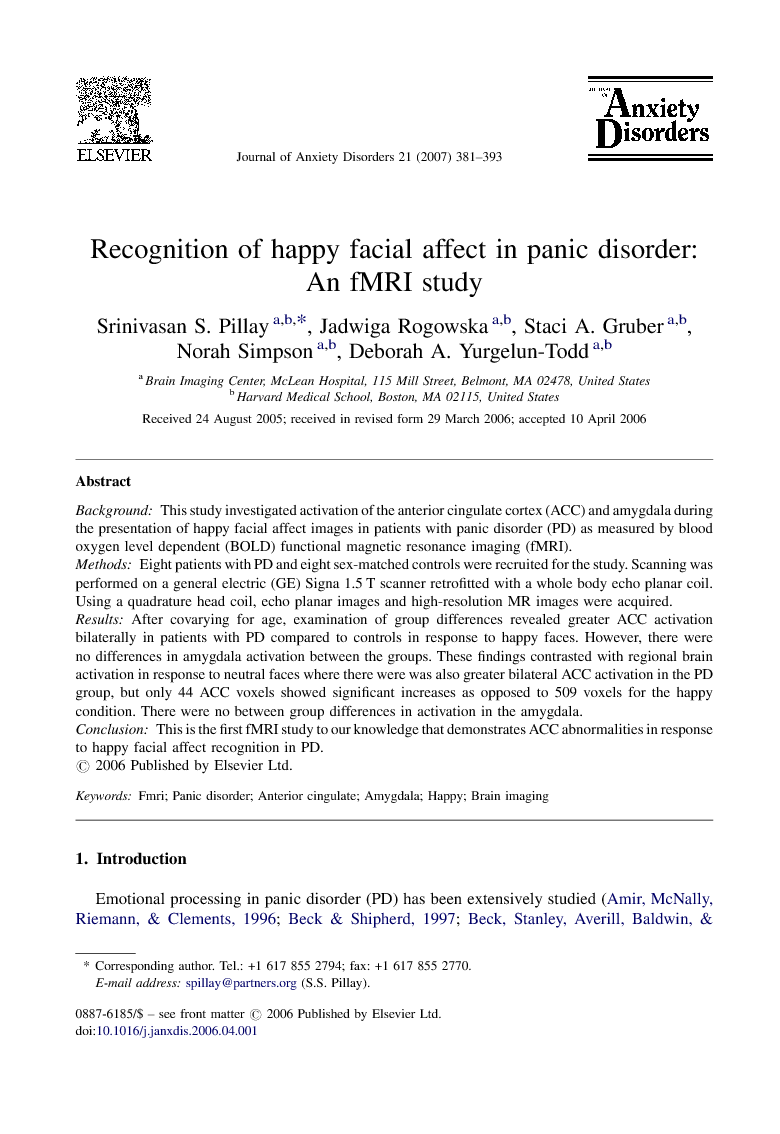 Background This study investigated activation of the anterior cingulate cortex (ACC) and amygdala during the presentation of happy facial affect images in patients with panic disorder (PD) as measured by blood oxygen level dependent (BOLD) functional magnetic resonance imaging (fMRI). Methods Eight patients with PD and eight sex-matched controls were recruited for the study. Scanning was performed on a general electric (GE) Signa 1.5 T scanner retrofitted with a whole body echo planar coil. Using a quadrature head coil, echo planar images and high-resolution MR images were acquired. Results After covarying for age, examination of group differences revealed greater ACC activation bilaterally in patients with PD compared to controls in response to happy faces. However, there were no differences in amygdala activation between the groups. These findings contrasted with regional brain activation in response to neutral faces where there were was also greater bilateral ACC activation in the PD group, but only 44 ACC voxels showed significant increases as opposed to 509 voxels for the happy condition. There were no between group differences in activation in the amygdala. Conclusion This is the first fMRI study to our knowledge that demonstrates ACC abnormalities in response to happy facial affect recognition in PD.

Emotional processing in panic disorder (PD) has been extensively studied (Amir, McNally, Riemann, & Clements, 1996; Beck & Shipherd, 1997; Beck, Stanley, Averill, Baldwin, & Deagle, 1992; Bouton, Mineka, & Barlow, 2001; Ehlers, Margraf, Taylor, & Roth, 1988; McNally, 1990 and McNally et al., 1994; McNally, Hornig, Otto, & Pollack, 1997; Pauli et al., 1997 and Windmann, 1998). However, all of these studies focus on the processing of threat related information, and only a few studies address emotional processing in general (Carter, Maddock, & Magliozzi, 1992) or processing of happy facial affect (McNally, Riemann, Louro, Lukach, & Kim, 1992). It has been suggested that happy faces may signify “safety from threat” (Killgore & Yurgelun-Todd, 2004), or, in the case of PD, positive reinforcement or reassurance. Thus, the affective state of anxiety may result from an abnormal response to threat-related stimuli as well as a compromised ability to respond to safety cues such as a happy face. Indeed, it has been documented that patients with PD have rated positive words as more emotional than catastrophe words (McNally et al., 1992), indicating a possible exaggeration of positive response in the search for relief from an underlying chronically anxious state. The theoretical rationale for examining the interaction of response to happy faces and anxiety is supported by a number of studies. In one study of undergraduates, the tendency to be hopeful had negative correlations with stress response, hopelessness, depressive tendency, and trait anxiety, and a positive one with feeling of happiness, inferring that the processing of happiness may be contrasted with that of stress and anxiety (Kato & Snyder, 2005). Furthermore, highly anxious subjects have been shown to have a reduced ability to process the emotional content of faces, including happy faces (Rossignol, Philippot, Douilliez, Crommelinck, & Campanella, 2005), and socially anxious individuals have been shown to attribute more negativity to positive stimuli (D’Argembeau, Van der Linden, Etienne, & Comblain, 2003) indicating an interaction between the recognition of positive and negative valenced emotions. Furthermore, in children, there has been a reported connection between anxiety and the search for happy faces, indicating another connection between happiness and anxiety (Hadwin et al., 2003). The high comorbidity between depression and PD (Williamson, Forbes, Dahl, & Ryan, 2005) also suggests that the processing of happy facial affect may be affected in patients with PD. In fact, one early study demonstrated the ability of fear of anger, depression, and positive emotions to predict fear of laboratory-induced bodily sensations in a population with no history of panic attacks (Williams, Chambless, & Ahrens, 1997). Thus, this exploratory study generated its hypotheses based on the abovementioned evidence that suggests that anxiety may not just be a function of hypersensitivity to fear-related information, but also hyposensitivity to positively valenced information. In this study, we examine differences in regional brain activation upon exposure to happy facial affect in patients with PD in an attempt to describe potential differences in neural processing that may exist in PD patients compared to controls when faced with identifying a positive affect. Furthermore, the neural processing of emotional faces appears to be under top-down control (Pessoa, McKenna, Gutierrez, & Ungerleider, 2002) and as such, requires an ability to attend to such stimuli. Since several studies to date have reported reductions in attention in patients with PD (Asmundson, Stein, Larsen, & Walker, 1994; Berksun, 1999; Lautenbacher, Spernal, & Krieg, 2002; McNally, Riemann, & Kim, 1990; Otto, McNally, Pollack, Chen, & Rosenbaum, 1994), the findings also relate to attention to happy faces and the extent to which the neural processing underlying attention to these faces may be aberrant in PD. Thus far, numerous fMRI studies have demonstrated changes in brain activation in response to happy faces (Armony, Corbo, Clement, & Brunet, 2005; Killgore & Yurgelun-Todd, 2004; Wild, Erb, Eyb, Bartels, & Grodd, 2003; Williams, Morris, McGlone, Abbott, & Mattingley, 2004; Yang, Menon, Reid, Gotlib, & Reiss, 2003). While, many studies have studied the brain response to happy faces using the response to happy faces as a denominator compared to the response to fearful faces (Armony et al., 2005 and Shin et al., 2005), in non-anxious adolescents, exposure to happy faces correlated with activation of the amygdala (Yang et al., 2003). In addition, one study showed that amygdala responses during happy face presentations correlated positively with tension/restlessness in adolescents (Killgore & Yurgelun-Todd, 2005), and another study showed that social phobics demonstrated increased activation of the amygdala compared to controls (Straube, Mentzel, & Miltner, 2005). In control subjects, amygdala activation to happy faces has been linked to the ability to attend to happy faces in contrast to fearful faces that activate the amygdala even when a person is not attending specifically to them (Pessoa et al., 2002 and Williams et al., 2005). This link between attention and processing of happy facial affect is corroborated by a study that showed that masked happy faces were associated with significant bilateral activation within the ACC and amygdala (Killgore & Yurgelun-Todd, 2004). More specifically, in adults, happy faces have been shown to activate the subgenual ACC (Nelson et al., 2003), although another study demonstrated decreased amygdala activation in response to happy faces in healthy control subjects (Whalen et al., 1998). We hypothesized that patients with PD would demonstrate increased activation of the amygdala and anterior cingulate cortex (ACC) compared to controls on exposure to happy faces. Several studies have documented a role of the amygdala (Breiter et al., 1996, Gur et al., 2002, Whalen et al., 1998, Wild et al., 2003 and Williams et al., 2004; Wright, Martis, Shin, Fischer, & Rauch, 2002; Yang et al., 2002 and Yang et al., 2003) and ACC in the recognition of happy facial affect in normal control populations (Esslen, Pascual-Marqui, Hell, Kochi, & Lehmann, 2004; Killgore & Yurgelun-Todd, 2004; Nelson et al., 2003 and Phillips et al., 1998). To our knowledge, there are no fMRI studies to date that examine the response to happy faces in patients with PD.