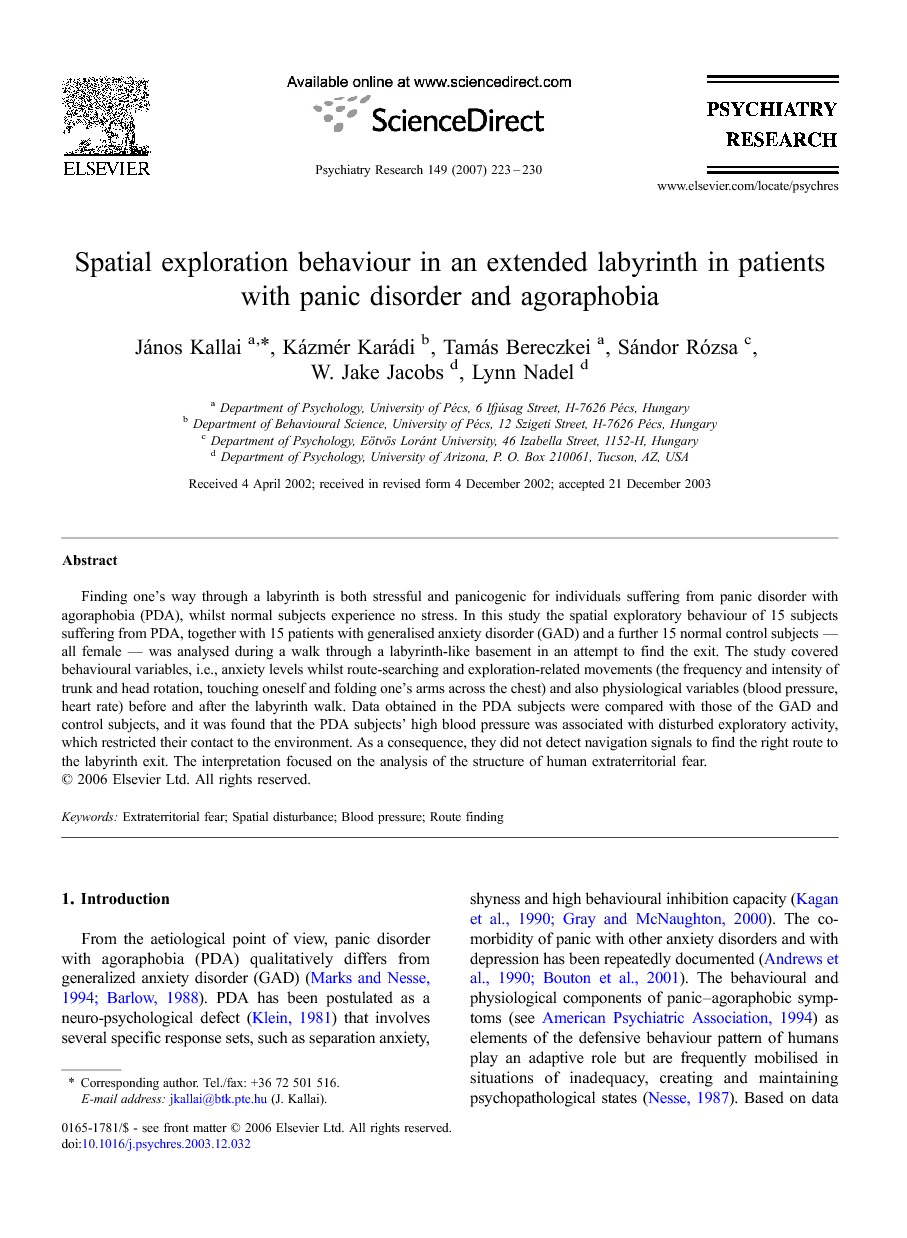 Finding one's way through a labyrinth is both stressful and panicogenic for individuals suffering from panic disorder with agoraphobia (PDA), whilst normal subjects experience no stress. In this study the spatial exploratory behaviour of 15 subjects suffering from PDA, together with 15 patients with generalised anxiety disorder (GAD) and a further 15 normal control subjects — all female — was analysed during a walk through a labyrinth-like basement in an attempt to find the exit. The study covered behavioural variables, i.e., anxiety levels whilst route-searching and exploration-related movements (the frequency and intensity of trunk and head rotation, touching oneself and folding one's arms across the chest) and also physiological variables (blood pressure, heart rate) before and after the labyrinth walk. Data obtained in the PDA subjects were compared with those of the GAD and control subjects, and it was found that the PDA subjects' high blood pressure was associated with disturbed exploratory activity, which restricted their contact to the environment. As a consequence, they did not detect navigation signals to find the right route to the labyrinth exit. The interpretation focused on the analysis of the structure of human extraterritorial fear.

From the aetiological point of view, panic disorder with agoraphobia (PDA) qualitatively differs from generalized anxiety disorder (GAD) (Marks and Nesse, 1994 and Barlow, 1988). PDA has been postulated as a neuro-psychological defect (Klein, 1981) that involves several specific response sets, such as separation anxiety, shyness and high behavioural inhibition capacity (Kagan et al., 1990 and Gray and McNaughton, 2000). The co-morbidity of panic with other anxiety disorders and with depression has been repeatedly documented (Andrews et al., 1990 and Bouton et al., 2001). The behavioural and physiological components of panic–agoraphobic symptoms (see American Psychiatric Association, 1994) as elements of the defensive behaviour pattern of humans play an adaptive role but are frequently mobilised in situations of inadequacy, creating and maintaining psychopathological states (Nesse, 1987). Based on data from examinations concerning human anxious attachment and the neuropsychological background, a panic with agoraphobic syndrome is considered to be a typical ‘new object reaction’ or neo-phobia (Marks, 1987), which is characterised by a slow habituation rate in orientation reaction, by intensive arousal changes, and by intensive, general physiological reactions to open-field and unaccustomed situations (Roth and Telch, 1986 and Kagan et al., 1990). In typical agoraphobic situations (e.g., public places, a crowd), both open and enclosed spaces may be considered as a biologically based precondition, and it might be suggested that agoraphobia is a pathological form of the extraterritorial fear that many species show outside their home range and manifest in body, head and trunk movements, in walking speed, in gait and in forms of exploration in new situations (Marks, 1987, Schmitt and Atzwanger, 1995 and Atzwanger and Schmitt, 1997). The symptoms of PDA are built upon a prepare, “hard-wired alarm system” that responds to an immediate perceived threat to the individual's well-being (Hugdahl and Öst, 1985, Nesse, 1987, Fanselow, 1994, Jacob et al., 1996 and Öhman and Mineka, 2001). The low fear threshold significantly decreases the individual's survival potential, causing a high level of physiological impairment and long-term morbidity (Markowitz et al., 1989). From the point of view of survival function, we are focusing on the clinical fact that agoraphobic patients are inclined to reduce attention to the perceptual field when their level of phobic and panic anxiety is high (Watts et al., 1986), to pay too much attention to safety signals (Thorpe and Salkovskis, 1998), to exhibit cognitive (Foa and Kozak, 1986) and behavioural avoidance (Eysenck, 1976 and Rachman, 1976), and to experience distress in the processing of the contextual or spatial signals of their current environment (Kallai et al., 1995 and Nadel and Jacobs, 1996). This anxiety-triggered, biologically founded spatial orientation disorder (Jacobs and Nadel, 1985 and Watts, 1989) plays a significant role in the genesis of the maladaptive cognitive and behavioural defence patterns that characterize PDA. In phobia, several defensive reactions are observable, such as gaze aversion, rejection of that part of the environment that is related to the fear-inducing object (Watts et al., 1986), and defensive gestures (Masterson and Crawford, 1982), visuo-spatial attention disorder (Dupont et al., 2000), perceptual avoidance (Viaud-Delmont et al., 2000), and behavioural avoidance vector deviation during goal-directed locomotion (Kallai et al., 1996). As noted above, the components of anxiety differ in subjects suffering from GAD versus those with PDA. These groups of patients respond to unfamiliar situations with different defensive patterns. We hypothesise that the cognitive and behavioural elements of PDA subjects' defensive behaviour are rooted in an evolving history of avoidance behaviour patterns that serve as normal defensive mechanisms to specific forms of stress. However, in PDA sufferers, there is a pathologically low threshold for inborn defensive response. This defensive response pattern is elicited by unfamiliar and strange surroundings, that is, when away from the home or personal territory — very specifically, as observed in the different components of exploratory behaviour and physiological reactions whilst searching for the exit from an unfamiliar and potentially fear-inducing labyrinth. The present study is designed to analyse patterns of cardiovascular reactions and exploration behaviour in PDA, GAD and control subjects. Finding one's way through a labyrinth has been a challenge ever since humans began dwelling in cities. Labyrinth navigation is both stressful and panicogenic for individuals diagnosed as having PDA, and indeed “in vivo” systematic desensitisation or “flooding therapy” often takes place in labyrinth-like supermarkets or in subways. In light of this, we made use of a labyrinth that is, firstly, similar to situations that individuals might ordinarily encounter and, secondly, structured in a way that might test a person's spatial orientation abilities. Using a real-world labyrinth, we compared three groups of subjects (PDA, GAD and control) in respect of their spatial learning performance, and their physiological and behavioural features. Our subjects were first instructed to orient themselves within a real-world labyrinth — i.e., in a Labyrinth Walk (LW), in which they were asked to find a direct route to a designated target: the exit from the labyrinth. We expected individuals with PDA to find such a walk stressful, whilst those with GAD and the normal control subjects were expected to experience no real stress during the walk. Based on our own findings (Kallai et al., 1995 and Kallai et al., 1999) and on previous studies (Jacobs and Nadel, 1985), we predicted that individuals in the PDA group would show defects in their ability to orient themselves in the current space and would simultaneously show specific exploration movements and defensive cardiovascular reactions.

Our data support previous research data (Marks, 1987) indicating that extraterritorial defensive behaviour is a significant aspect of PDA disorder. As our study shows, this tendency can be observed in dysfunctional exploratory patterns, in the decontextualisation of external cues, and in high systolic blood pressure combined with restlessness, anxiety and frequent trunk and head rotations. The PDA subjects may be characterised by a pathologically low threshold for inborn fear responses that are eliminated by extraterritorial and idiosyncratic situational cues. The revealed sociobiologically founded dysfunctional exploration pattern and spatial disorientation disorder also play a role in maintaining PDA.