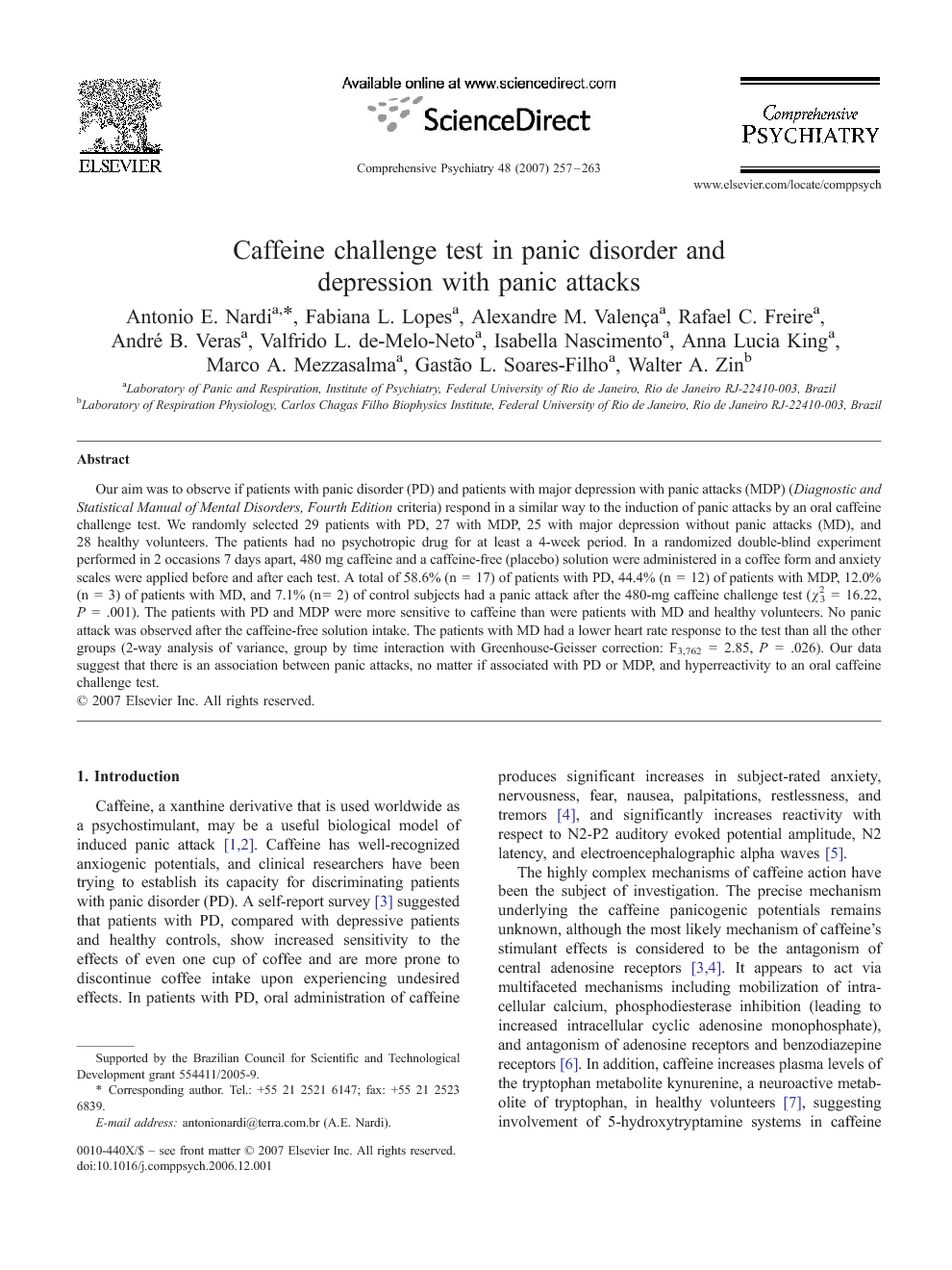 Caffeine, a xanthine derivative that is used worldwide as a psychostimulant, may be a useful biological model of induced panic attack [1] and [2]. Caffeine has well-recognized anxiogenic potentials, and clinical researchers have been trying to establish its capacity for discriminating patients with panic disorder (PD). A self-report survey [3] suggested that patients with PD, compared with depressive patients and healthy controls, show increased sensitivity to the effects of even one cup of coffee and are more prone to discontinue coffee intake upon experiencing undesired effects. In patients with PD, oral administration of caffeine produces significant increases in subject-rated anxiety, nervousness, fear, nausea, palpitations, restlessness, and tremors [4], and significantly increases reactivity with respect to N2-P2 auditory evoked potential amplitude, N2 latency, and electroencephalographic alpha waves [5]. The highly complex mechanisms of caffeine action have been the subject of investigation. The precise mechanism underlying the caffeine panicogenic potentials remains unknown, although the most likely mechanism of caffeine's stimulant effects is considered to be the antagonism of central adenosine receptors [3] and [4]. It appears to act via multifaceted mechanisms including mobilization of intracellular calcium, phosphodiesterase inhibition (leading to increased intracellular cyclic adenosine monophosphate), and antagonism of adenosine receptors and benzodiazepine receptors [6]. In addition, caffeine increases plasma levels of the tryptophan metabolite kynurenine, a neuroactive metabolite of tryptophan, in healthy volunteers [7], suggesting involvement of 5-hydroxytryptamine systems in caffeine action. Imaging studies of cerebral blood flow using positron emission tomography show significant decreases with caffeine infusion in healthy subjects as well as in patients with PD, but associated increases in glucose utilization [8]. These studies suggest that decrease in cerebral blood flow is a relatively nonspecific effect and not solely responsible for caffeine-induced panic. Dager et al [9] applied a rapid proton echo-planar spectroscopic imaging technique to dynamically measure regional brain metabolic responses to caffeine ingestion. They measured changes in brain lactate due to the combined effects of caffeine's stimulation of glycolysis and reduction of cerebral blood flow in 9 heavy caffeine users and 9 caffeine-intolerant individuals who had previously discontinued or substantially curtailed use of caffeinated products because of associated anxiety and discomforting physiologic arousal, and were studied at baseline and then during 1 hour after ingestion of caffeine citrate (10 mg/kg). To assess state-trait contributions and the effects of caffeine tolerance, 5 of the caffeine users were restudied after a 1- to 2-month caffeine holiday. The caffeine-intolerant individuals, but not the regular caffeine users, experienced substantial psychological and physiological distress in response to caffeine ingestion. Significant increases in global and regionally specific brain lactate were observed only among the caffeine-intolerant subjects. Reexposure of the regular caffeine users to caffeine after a caffeine holiday resulted in little or no adverse clinical reaction but significant increases in brain lactate that were of a magnitude similar to that observed for the caffeine-intolerant group. These results provide direct evidence for the loss of caffeine tolerance in the human brain subsequent to caffeine discontinuation and suggest mechanisms for the phenomenon of caffeine intolerance other than its metabolic effects on elevating brain lactate. These brain findings were similar to brain chemical abnormalities observed in patients with PD in response to lactate-induced panic and hyperventilation, suggesting one possible panicogenic mechanism of action in common, probably a reflection of metabolic differences in panic subjects coupled with reduced cerebral blood flow and adenosine blockage in the case of caffeine. Similarly to other panic-inducing challenge agents, not all individuals with PD display a panic attack after a caffeine challenge. Perhaps this may establish the existence of subgroups of patients with PD, possibly with differences at clinical, psychological, and physiological levels [10], [11] and [12]. Oral administration of a large amount (eg, 480-720 mg) of caffeine safely produces symptoms of anxiety and panic attacks with only the complication of headache. Caffeine-induced panic attacks include both somatic and affective symptoms of a panic attack [2] and [4]. The core symptoms of caffeine-induced anxiety include a number of nonpanic symptoms, including restlessness, excitement, insomnia, and diuresis. Unlike with other panicogens, caffeine-provoked panic is associated with long-lasting anxiety symptoms that may last many hours. The use of various anxiety/panic-inducing challenges during the last decades has accelerated research on the physiopathology of PD [13] and [14]. Our aim was to observe if patients with PD and patients with major depression with panic attacks (MDP) (Diagnostic and Statistical Manual of Mental Disorders, Fourth Edition [DSM-IV] criteria) respond in a similar way to the induction of panic attacks by a caffeine challenge test. We also decided to try to discriminate patients with panic attack (PD and MDP) from patients with MD, as these groups might have some differences—physiological or psychopathologic—in relation to the anxiety response level to the caffeine challenge test. We hypothesize that (1) the panic rates of patients with panic attack (PD and MDP) in response to caffeine will be greater than those of patients with MD and healthy controls and (2) the panic rates of subjects with MD and the healthy control group will not differ significantly from each other. We expected that the panic attack groups (PD and MDP) have a greater sensibility to the oral caffeine challenge test than groups without panic attack.