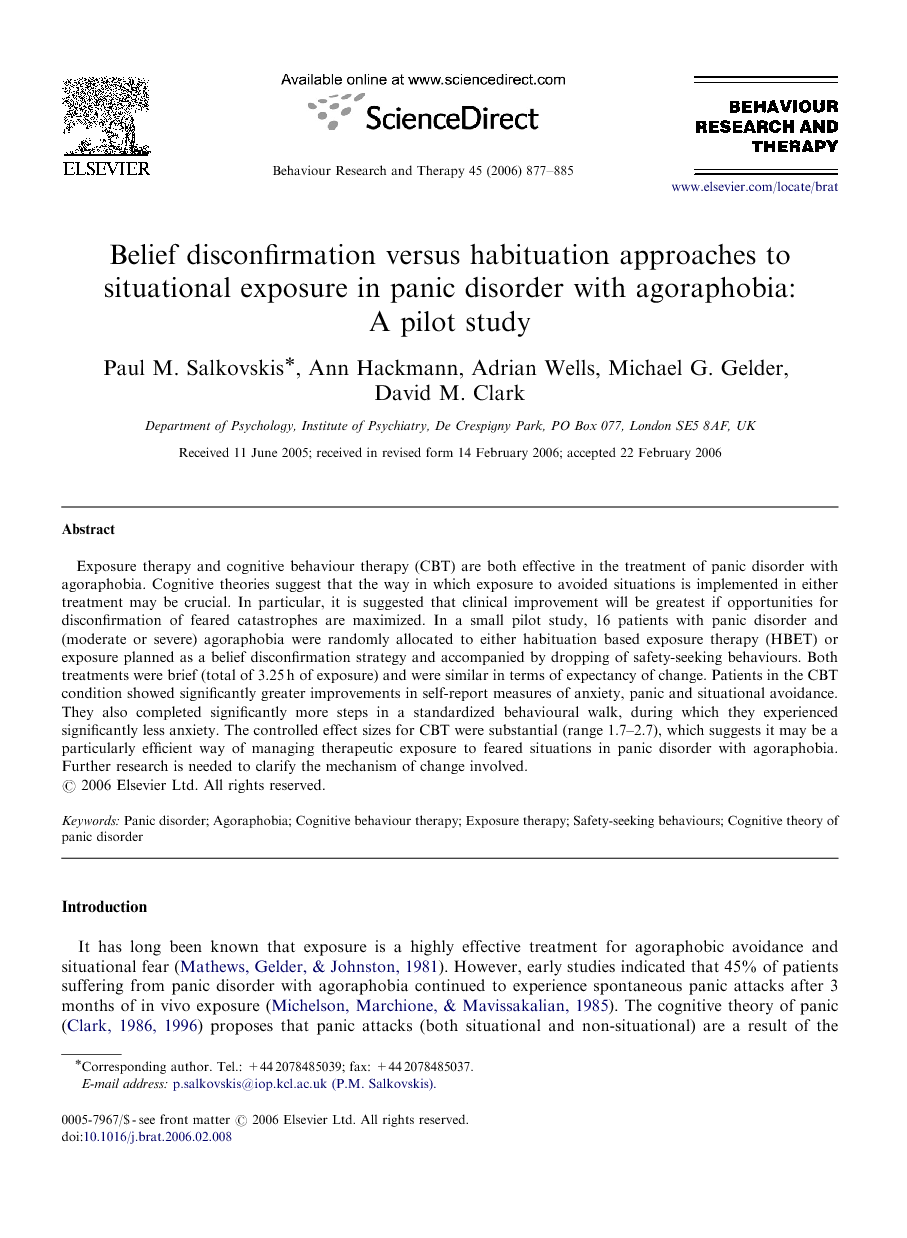 Exposure therapy and cognitive behaviour therapy (CBT) are both effective in the treatment of panic disorder with agoraphobia. Cognitive theories suggest that the way in which exposure to avoided situations is implemented in either treatment may be crucial. In particular, it is suggested that clinical improvement will be greatest if opportunities for disconfirmation of feared catastrophes are maximized. In a small pilot study, 16 patients with panic disorder and (moderate or severe) agoraphobia were randomly allocated to either habituation based exposure therapy (HBET) or exposure planned as a belief disconfirmation strategy and accompanied by dropping of safety-seeking behaviours. Both treatments were brief (total of 3.25 h of exposure) and were similar in terms of expectancy of change. Patients in the CBT condition showed significantly greater improvements in self-report measures of anxiety, panic and situational avoidance. They also completed significantly more steps in a standardized behavioural walk, during which they experienced significantly less anxiety. The controlled effect sizes for CBT were substantial (range 1.7–2.7), which suggests it may be a particularly efficient way of managing therapeutic exposure to feared situations in panic disorder with agoraphobia. Further research is needed to clarify the mechanism of change involved.

It has long been known that exposure is a highly effective treatment for agoraphobic avoidance and situational fear (Mathews, Gelder, & Johnston, 1981). However, early studies indicated that 45% of patients suffering from panic disorder with agoraphobia continued to experience spontaneous panic attacks after 3 months of in vivo exposure (Michelson, Marchione, & Mavissakalian, 1985). The cognitive theory of panic (Clark (1986) and Clark (1996)) proposes that panic attacks (both situational and non-situational) are a result of the person catastrophically misinterpreting bodily sensations, particularly those arising from anxiety. Safety-seeking behaviours (including both avoidance of agoraphobic situations and behaviours occurring within such situations and intended to prevent feared catastrophes) are said to be motivated by the catastrophic misinterpretations and to prevent belief change and clinical recovery (Clark, 1999; Salkovskis, 1991). If this is so, then situational exposure will be most beneficial when it helps the person to experience a disconfirmation of the catastrophic misinterpretations which occur within such situations. Although such disconfirmation may occur incidentally in the course of exposure, treatment should proceed most efficiently when patients have a framework which allows them to understand the role of misinterpretations in panic/anxiety and a set of procedures which allow them to generate convincing disconfirmations of their misinterpretations by dropping or reversing their safety-seeking behaviours in situations which normally provoke panic. The cognitive theory of panic and agoraphobia therefore predicts that the best results will be obtained in patients suffering from this disorder when the cognitive outcomes of behavioural change are maximised. Williams and Falbo (1996) found that both exposure therapy and conventional cognitive restructuring gave poorer results in panic disorder patients with high levels of agoraphobic avoidance compared to panic disorder patients in whom avoidance is lower. When treatments specifically focussed on helping patients to deal with panic attacks have been evaluated, comparable reductions in panic frequency have generally been noted in patients with high and low levels of agoraphobic avoidance (Clark et al. (1994) and Clark et al. (1999); Craske, DeCola, Sachs, & Pontillo, 2003; Hoffart, 1995). There is some specific evidence consistent with the cognitive account of the link between threat beliefs, safety-seeking behaviours and the maintenance of phobic anxiety. Salkovskis, Clark, and Gelder, (1996) found systematic, theoretically predicted, associations between catastrophic beliefs and particular safety-seeking behaviours in a large sample of patients suffering from panic disorder. For example, an association was found between fears of passing out and holding onto people or objects. This fear was not associated with trying to do more exercise, whilst fears of being paralysed were. In an experimental study, eight patients suffering from social phobia were allocated in counterbalanced order to a session of exposure with an habituation rationale and no instructions regarding safety-seeking behaviours, and a session of exposure in which a cognitive rationale was offered as a way of getting participants to systematically decrease their safety seeking during the situational exposure. It was found that exposure combined with the cognitive rationale and decreased safety behaviours was significantly better than exposure with the habituation rationale in terms of reductions of within-situation anxiety and belief in the particular catastrophe that the patient feared (Wells et al., 1995). In an experimental study of patients suffering from panic disorder with mainly severe agoraphobia similar effects were demonstrated (Salkovskis, Clark, Hackmann, Wells, & Gelder, 1999). All patients in that study carried out an initial behaviour test, closely followed by an experimental session, which included a brief (15 min) period of exposure during which participants either decreased or maintained within-situation safety-seeking behaviours. When the behaviour test was repeated within 2 days, patients who had decreased their safety-seeking behaviours during the experimental session showed a significantly greater reduction in catastrophic beliefs and anxiety than those who had maintained their safety-seeking behaviour. In both the Wells et al. (1995) and the Salkovskis et al. (1999) studies, the periods of exposure were very brief (15 min). The exposure used in exposure therapy treatment trials is usually of considerably longer duration (2–3 h), so it could be argued that the very brief exposure times used in these studies may have specifically disadvantaged the exposure condition. Typically, exposure is believed to require repeated and longer sessions in order to be effective in reducing anxiety (e.g. 24 h in the study by Michelson, Marchione, & Greenwald, 1996). The study reported here is the clinical extension of the previously reported experimental study in agoraphobia (Salkovskis et al., 1999). Participants who had previously undergone the experimental procedure (which had involved 15 min of situational exposure), went on in the present study to receive a further 3.5 h of therapist assisted exposure consistent the previous procedure. The independent variable was the way in which exposure sessions were carried out. In habituation-based exposure therapy (HBET), the emphasis prior to, and within, exposure sessions was on allowing anxiety to decline within the feared situation in order to extinguish the anxiety response. Patients were also instructed to maintain their safety-seeking behaviours to assist with anxiety management. In cognitive behaviour therapy (CBT), a belief disconfirmation rationale was provided for the exposure sessions, with the emphasis prior to, and during, exposure being on decreasing or reversing safety-seeking behaviours in order to disconfirm feared catastrophes. In the course of treatment, patients were helped to decrease or reverse specific safety-seeking behaviours they usually used when anxious as a behavioural experiment to help them disconfirm their feared catastrophes. The aim of the present study was therefore to evaluate the relative clinical impact of identical levels of in vivo exposure presented and implemented in two different ways.