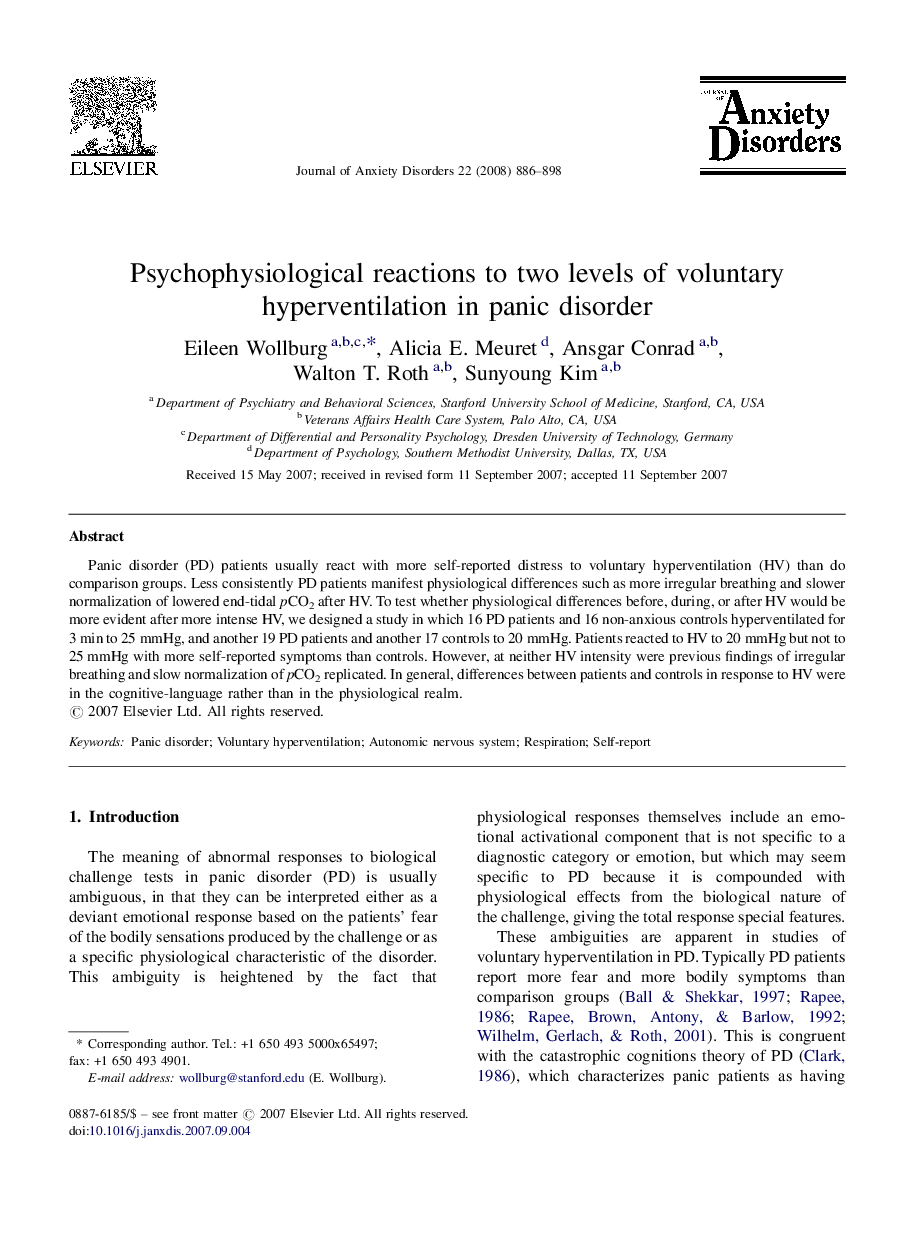 Panic disorder (PD) patients usually react with more self-reported distress to voluntary hyperventilation (HV) than do comparison groups. Less consistently PD patients manifest physiological differences such as more irregular breathing and slower normalization of lowered end-tidal pCO2 after HV. To test whether physiological differences before, during, or after HV would be more evident after more intense HV, we designed a study in which 16 PD patients and 16 non-anxious controls hyperventilated for 3 min to 25 mmHg, and another 19 PD patients and another 17 controls to 20 mmHg. Patients reacted to HV to 20 mmHg but not to 25 mmHg with more self-reported symptoms than controls. However, at neither HV intensity were previous findings of irregular breathing and slow normalization of pCO2 replicated. In general, differences between patients and controls in response to HV were in the cognitive-language rather than in the physiological realm.

The meaning of abnormal responses to biological challenge tests in panic disorder (PD) is usually ambiguous, in that they can be interpreted either as a deviant emotional response based on the patients’ fear of the bodily sensations produced by the challenge or as a specific physiological characteristic of the disorder. This ambiguity is heightened by the fact that physiological responses themselves include an emotional activational component that is not specific to a diagnostic category or emotion, but which may seem specific to PD because it is compounded with physiological effects from the biological nature of the challenge, giving the total response special features. These ambiguities are apparent in studies of voluntary hyperventilation in PD. Typically PD patients report more fear and more bodily symptoms than comparison groups (Ball & Shekkar, 1997; Rapee, 1986; Rapee, Brown, Antony, & Barlow, 1992; Wilhelm, Gerlach, & Roth, 2001). This is congruent with the catastrophic cognitions theory of PD (Clark, 1986), which characterizes panic patients as having irrational beliefs which make them fearful of bodily sensations resulting from fear associated with previous panic attacks. Panic patients interpret such sensations as the harbinger of an imminent attack (for citations and discussions of this theory and the Suffocation False Alarm and Hyperventilation theories mentioned below, see Roth, Wilhelm, & Pettit, 2005). Feelings of shortness of breath, dizziness, and numbness and tingling in the fingers are common effects of voluntary hyperventilation in everyone, but in PD they may be noticed and feared much more than in those who have never had panic attacks. Misinterpretations of those bodily sensations lead to a positive feedback loop between anxiety and physical sensations. Thus, in PD oversensitivity to hyperventilation is at a cognitive rather than at a lower physiological level. However, the anxiety produced by voluntary hyperventilation may not be as intense as in natural attacks or as produced in the laboratory by infusions or the inhalation of gases, because voluntary hyperventilation can quickly be halted if the sensations become too frightening, affording a modicum of control. The Catastrophic Cognitions theory is supported by the fact that fear during voluntary HV is correlated with scores on the Anxiety Sensitivity Inventory, a measure of fear of bodily sensations (Asmundson, Sandler, Wilson, & Norton, 1993; Holloway & McNally, 1987; Rapee & Medoro, 1994). However, two physiological responses to HV seem to support biological theories of PD. After voluntary hyperventilation, the recovery of pCO2 levels to normal levels is often slower in PD patients than in non-anxious controls ( Friedman, Mathis, Hayes, Renshaw, & Dager, 2006; Gorman et al., 1988; Maddock & Carter, 1991; Wilhelm et al., 2001a). This is congruent with the Suffocation False Alarm theory of PD, which postulates that PD patients are biologically abnormally sensitive to rising arterial CO2 ( Klein, 1993 and Klein, 1994). They avoid this rise after HV by continuing to hyperventilate. Slow recovery from hyperventilation is also congruent with a Hyperventilation theory that postulates that PD patients have a specific biological propensity towards HV ( Ley, 1985 and Ley, 1989). A second physiological reaction congruent with the Suffocation False Alarm theory is more variable tidal volumes observed in PD patients during recovery from HV and at other times (Abelson, Weg, Nesse, & Curtis, 2001; Wilhelm et al., 2001a; Wilhelm, Trabert, & Roth, 2001). These tidal volumes may represent sighing or gasping for air, an adaptive physiological response to rising CO2. Yet both of these features, slower CO2 recovery and variable tidal volume, may be expressions of anxiety itself rather than being related to causes of PD, since hyperventilation and variable tidal volumes can be observed during stress and anxiety in people who never have had panic disorder (Holt & Andrews, 1989a; Whittal & Goetsch, 1995). We report here a study of two levels of voluntary HV in patients meeting the DSM-IV (American Psychiatric Association, 1994) definition of PD who were seeking treatment. One group of patients and controls hyperventilated to 25 mmHg end-tidal pCO2 and another group of patients and controls to 20 mmHg. We compared the responses of PD patients and controls before, during, and after HV in two response domains, the cognitive-language (self reported emotions and symptoms) and the physiological (respiratory, cardiovascular, and electrodermal measures). The simplest relationship between domains would be one where physiological responses paralleled self-report in the same way in both panic patients and non-anxious controls. That would support the idea that PD could be explained without going beyond the cognitive-language realm. Need for more physiological explanations of panic would be indicated by differences in physiological responses between panic patients and controls that could not be explained by different anxiety levels producing different degrees of general physiological stress activation. There is little consensus on standards for a voluntary hyperventilation test. Published examples have varied greatly on procedural parameters, but probably most important is the target level of pCO2, the measurement of which is often neglected ( Meuret, Ritz, Wilhelm, & Roth, 2005). Fried and Grimaldi (1993) reported that symptoms begin to emerge below 30 mmHg. Hornsveld, Garssen, and van Spiegel (1995) examined the influence of duration and depth of HV on the outcome and found that both influenced the development of symptoms. The authors advised a minimum of 3 min of HV and a pCO2 level below 1.9 kPa (14.3 mmHg) to assure that symptoms could be elicited in most people. We chose, however, 20 mmHg as our more demanding condition because in pilot studies PD patients often refused to go lower, claiming that they could not.