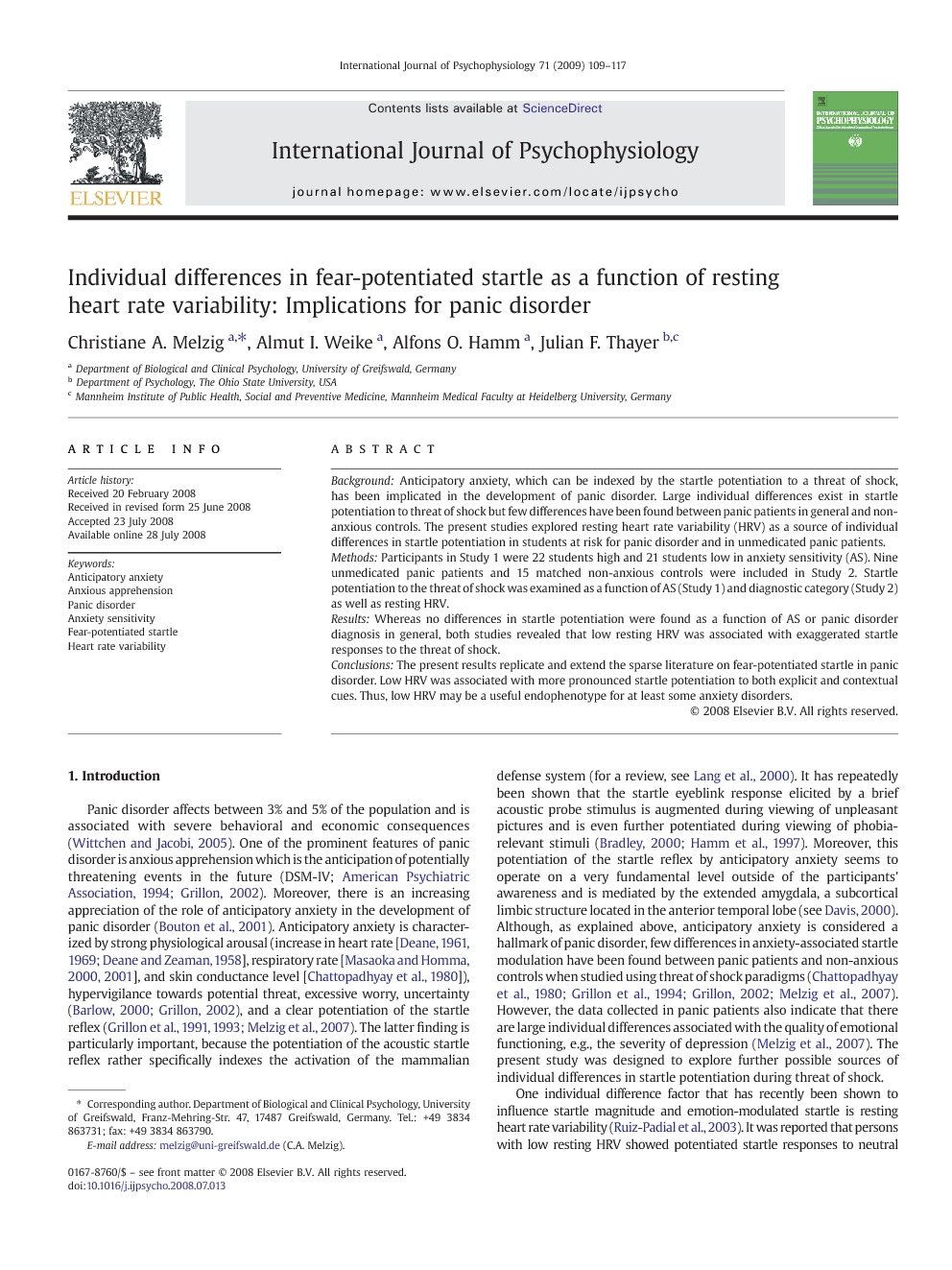 Panic disorder affects between 3% and 5% of the population and is associated with severe behavioral and economic consequences (Wittchen and Jacobi, 2005). One of the prominent features of panic disorder is anxious apprehension which is the anticipation of potentially threatening events in the future (DSM-IV; American Psychiatric Association, 1994 and Grillon, 2002). Moreover, there is an increasing appreciation of the role of anticipatory anxiety in the development of panic disorder (Bouton et al., 2001). Anticipatory anxiety is characterized by strong physiological arousal (increase in heart rate [Deane, 1961, Deane, 1969 and Deane and Zeaman, 1958], respiratory rate [Masaoka and Homma, 2000 and Masaoka and Homma, 2001], and skin conductance level [Chattopadhyay et al., 1980]), hypervigilance towards potential threat, excessive worry, uncertainty (Barlow, 2000 and Grillon, 2002), and a clear potentiation of the startle reflex (Grillon et al., 1991, Grillon et al., 1993 and Melzig et al., 2007). The latter finding is particularly important, because the potentiation of the acoustic startle reflex rather specifically indexes the activation of the mammalian defense system (for a review, see Lang et al., 2000). It has repeatedly been shown that the startle eyeblink response elicited by a brief acoustic probe stimulus is augmented during viewing of unpleasant pictures and is even further potentiated during viewing of phobia-relevant stimuli (Bradley, 2000 and Hamm et al., 1997). Moreover, this potentiation of the startle reflex by anticipatory anxiety seems to operate on a very fundamental level outside of the participants' awareness and is mediated by the extended amygdala, a subcortical limbic structure located in the anterior temporal lobe (see Davis, 2000). Although, as explained above, anticipatory anxiety is considered a hallmark of panic disorder, few differences in anxiety-associated startle modulation have been found between panic patients and non-anxious controls when studied using threat of shock paradigms (Chattopadhyay et al., 1980, Grillon et al., 1994, Grillon, 2002 and Melzig et al., 2007). However, the data collected in panic patients also indicate that there are large individual differences associated with the quality of emotional functioning, e.g., the severity of depression (Melzig et al., 2007). The present study was designed to explore further possible sources of individual differences in startle potentiation during threat of shock. One individual difference factor that has recently been shown to influence startle magnitude and emotion-modulated startle is resting heart rate variability (Ruiz-Padial et al., 2003). It was reported that persons with low resting HRV showed potentiated startle responses to neutral foreground stimuli, which may be interpreted as a constant state of hypervigilance due to anticipation of adverse events in the environment. Thus, individual differences in resting HRV may influence the modulation of startle responses and this may also hold true for startle potentiation during anticipatory anxiety. Interestingly, lowered HRV has been linked to a number of physiological and psychological disorders and emotion regulation ability (see Thayer and Brosschot, 2005 for a review). Furthermore, it has been proposed that HRV reflects the level of inhibitory control of the prefrontal cortex, not only over sympathoexcitatory circuits but also over defensive networks (Thayer and Lane, 2000). Although there is an ongoing discussion that this prefrontal inhibitory control may even be critical for the development of pathological anxiety (Quirk and Gehlert, 2003) as found in panic disorder, to date HRV as a potential source of inter-individual variability in startle potentiation during anticipatory anxiety has not been examined. In the present paper, we report the results of two studies in which we investigated the relationship between startle potentiation during anticipatory anxiety and the resting HRV of the participants. In the first study, persons were selected on the basis of their scores on a measure of anxiety sensitivity, an individual difference variable that has been shown to be associated with the future development of panic disorder (McNally, 2002, Hayward et al., 2000, Schmidt et al., 1997 and Schmidt et al., 1999). In the second study, unmedicated patients with diagnosed panic disorder and matched controls were examined. Consistent with prior research, we expected that the low and high anxiety sensitivity groups as well as the panic disorder patients and matched controls would not differ overall on startle potentiation during threat of shock. However, we expected that independent of anxiety grouping or diagnostic categories, those persons with low resting HRV would show larger startle potentiation compared to those with high resting HRV.