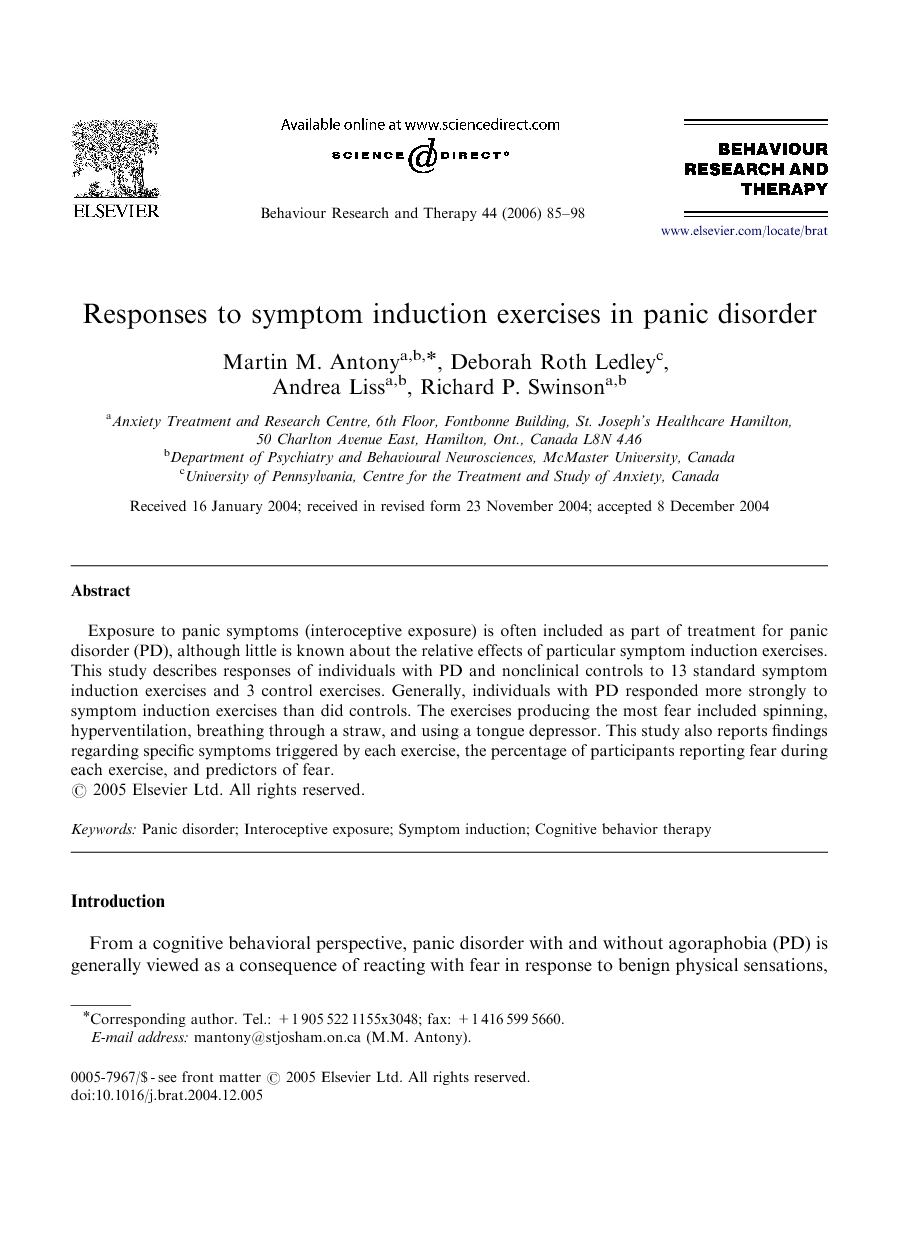 Exposure to panic symptoms (interoceptive exposure) is often included as part of treatment for panic disorder (PD), although little is known about the relative effects of particular symptom induction exercises. This study describes responses of individuals with PD and nonclinical controls to 13 standard symptom induction exercises and 3 control exercises. Generally, individuals with PD responded more strongly to symptom induction exercises than did controls. The exercises producing the most fear included spinning, hyperventilation, breathing through a straw, and using a tongue depressor. This study also reports findings regarding specific symptoms triggered by each exercise, the percentage of participants reporting fear during each exercise, and predictors of fear.

From a cognitive behavioral perspective, panic disorder with and without agoraphobia (PD) is generally viewed as a consequence of reacting with fear in response to benign physical sensations, such as a racing or pounding heart, breathlessness, and dizziness (e.g., Barlow, 2002). In support of these models, numerous studies have confirmed that individuals with PD tend to be vigilant for symptoms of arousal (Schmidt, Lerew, & Trakowski, 1997), to interpret symptoms of arousal as being dangerous (Clark et al., 1997), and to report higher than normal levels of fear and anxiety associated with symptoms of physical arousal (Taylor, Koch, & McNally, 1992). In light of considerable research showing that exposure to feared situations is a powerful method of reducing fear, Goldstein and Chambless (1978) first suggested that repeated exposure to feared sensations, also known as interoceptive exposure (IE) might be an effective way of reducing the fear of physical sensations in PD. Today, IE exercises (e.g., running on the spot, hyperventilation, spinning, breathing through a straw) are often included as a component of cognitive behavioral treatments for PD, and have been shown to be an effective intervention, both as part of a multiple-component treatment package (e.g., Barlow, Gorman, Shear, & Woods, 2000) and on their own (e.g., Craske, Rowe, Lewin, & Noriega-Dimitri, 1997). Although previous studies have found that IE leads to decreases in PD symptomatology, almost no studies have examined the process underlying the improvements that are often obtained. One exception is a recent report by Schmidt and Trakowski (2004), that described the ways in which patients responded to symptom induction exercises carried out in the context of group treatment for PD. Their report provides valuable information on the physical sensations induced by each exercise, subjective responses to the exercises (e.g., intensity of sensation, similarity to sensations experienced during panic attacks), and the time it took for patients to extinguish the anxiety response to a particular exercise. This study showed that IE was useful for most patients with PD, that the exercises induced anxiety (and even panic), and that the anxiety decreased within several sessions of repeated exposure. The current study examined similar questions to those examined by Schmidt and Trakowski (2004). Individuals with PD and nonclinical control participants completed a series of 13 standard IE exercises, as well as 3 “control” exercises that were not expected to trigger panic-related symptoms. After each exercise, participants provided detailed information regarding their responses, including the intensity of 13 DSM-IV panic attack symptoms (American Psychiatric Association, 2000), the intensity of fear, and the similarity of their response to their typical panic reactions. The current study differed from Schmidt and Trakowski's (2004) study in some notable ways. First, a nonclinical control group was included to explore differential responding to exercises by individuals with and without PD. Although individuals without PD were expected to experience some physical sensations in response to some of the exercises, it was predicted that they would react to a lesser degree than participants in the PD group and that they would be less likely to associate the sensations with panic or fear. Second, in the current study, control exercises were included to assess whether individuals with panic disorder are biased to report experiencing physical symptoms even when engaging in exercises that are not expected to trigger any particular sensations. We expected the standard symptom induction exercises to be more effective than the control exercises for triggering physical sensations and fear. Third, this is the first study to examine the question of whether the types of sensations feared by particular patients are related to the types of exercises that are most useful for triggering a fear response. Participants in the PD group were expected to respond most strongly to exercises that brought on their most feared physical sensations.