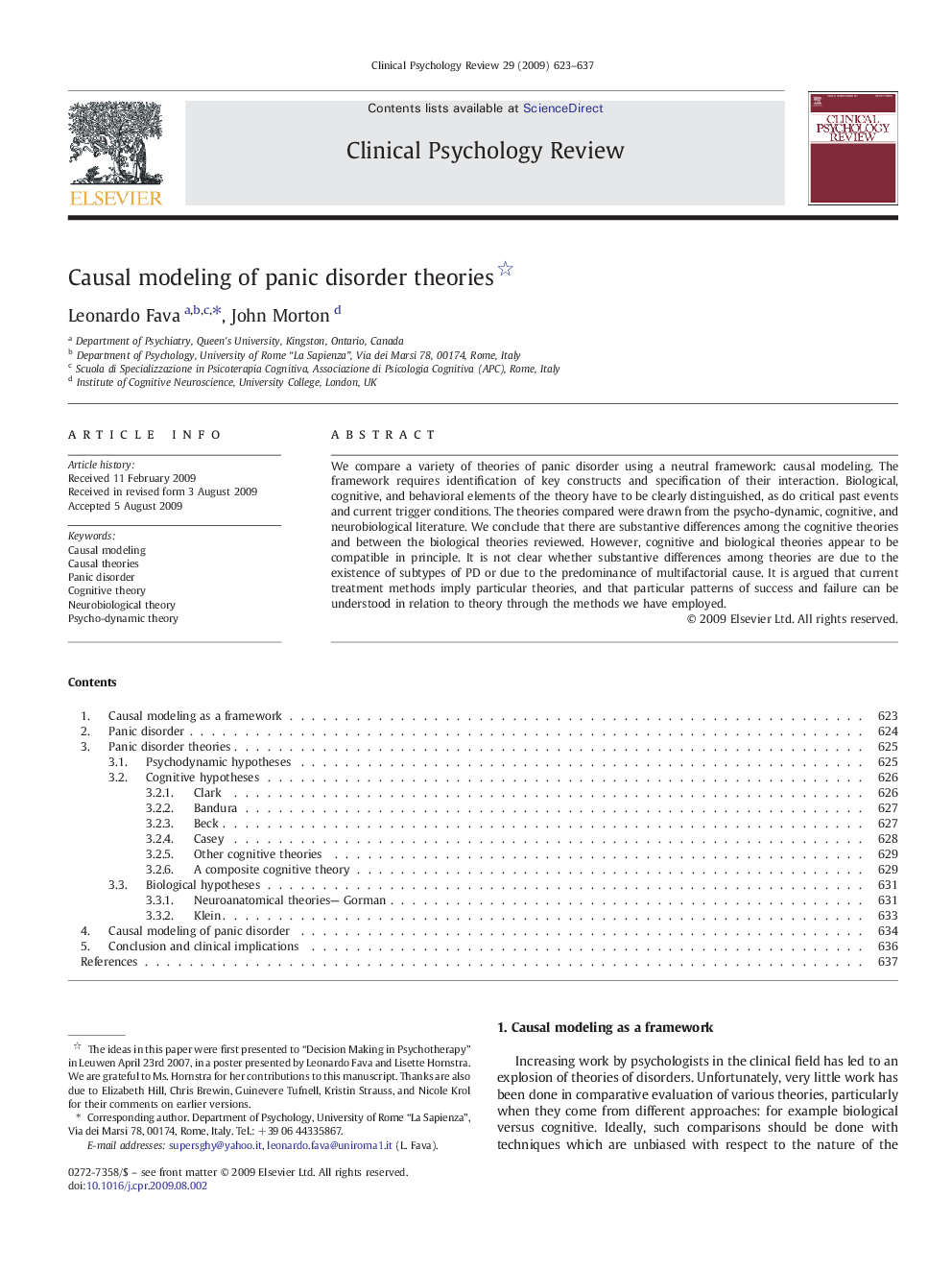 We compare a variety of theories of panic disorder using a neutral framework: causal modeling. The framework requires identification of key constructs and specification of their interaction. Biological, cognitive, and behavioral elements of the theory have to be clearly distinguished, as do critical past events and current trigger conditions. The theories compared were drawn from the psycho-dynamic, cognitive, and neurobiological literature. We conclude that there are substantive differences among the cognitive theories and between the biological theories reviewed. However, cognitive and biological theories appear to be compatible in principle. It is not clear whether substantive differences among theories are due to the existence of subtypes of PD or due to the predominance of multifactorial cause. It is argued that current treatment methods imply particular theories, and that particular patterns of success and failure can be understood in relation to theory through the methods we have employed.

Increasing work by psychologists in the clinical field has led to an explosion of theories of disorders. Unfortunately, very little work has been done in comparative evaluation of various theories, particularly when they come from different approaches: for example biological versus cognitive. Ideally, such comparisons should be done with techniques which are unbiased with respect to the nature of the competing theories. This theoretical neutrality is characteristic of what we call a framework, a term that contrasts with theory and model. A model is, in this way of thinking, representation of a theory within a particular framework. The causal modeling framework was developed by Morton and Frith, 1995 and Morton, 2004 in order to represent theories of developmental disorders, making clear distinctions among biological, cognitive, and behavioral components of the theories. The framework has been applied to a variety of disorders, especially autism (Frith, Morton, & Leslie, 1991), dyslexia (Morton and Frith, 1993a, Morton and Frith, 1993b, Morton and Frith, 1995 and Morton and Frith, 2002), psychopathy (Blair, 1995), conduct disorder (Krol, Morton & de Bruyn, 2004) and DCD (Sims & Morton, 1998). The framework has also been particularly useful for comparison of different, often competing, causal theories of dyslexia (British Psychological Society, 1999 and Frith, 1999). Here, the advantage of using the causal modeling framework has been to demonstrate that some theories that were perceived as being totally different from each other were essentially similar, differing only in the relative weighting of the primary causes. In other cases, the weakness of particular theories, for example of autism (Morton, 2004), has been highlighted following their representation in the causal modeling notation. The framework has also been beneficial in the training of education psychologists (Monsen et al., 1998 and Frederickson and Cline, 2002) who have adapted the framework for understanding pathways of special educational needs.

By using the causal modeling framework we have been able to compare a variety of different theories and models of PD by expressing them in the same notation. From this, the differences and similarities have been highlighted and the crucial comparisons have become apparent. Unlike Roth et al. (2005), we have not attempted to assess the scientific status of the various theories. As the joint model makes clear, the same system can be triggered both by internal and external triggers. We would add that the same system can be triggered both by known, consciously marked cues, as with the agoraphobic, or by cues that the patient does not consciously associate with the trauma (Brewin et al., 1996). Indeed, as we can see for the integrated cognitive model in Fig. 7, there are both internal and external triggers that might influence the onset and the maintenance of the disorder. For instance, patients with panic disorder with agoraphobia are characterized by an anxiety of either being in places or in situations where it could be difficult or awkward to get out, or where there was no likelihood of any kind of aid in the case of an unexpected panic attack. The typical threats in PD with agoraphobia include being outside alone, being in a line at the supermarket, for example, being on a bridge or traveling with bus or car.