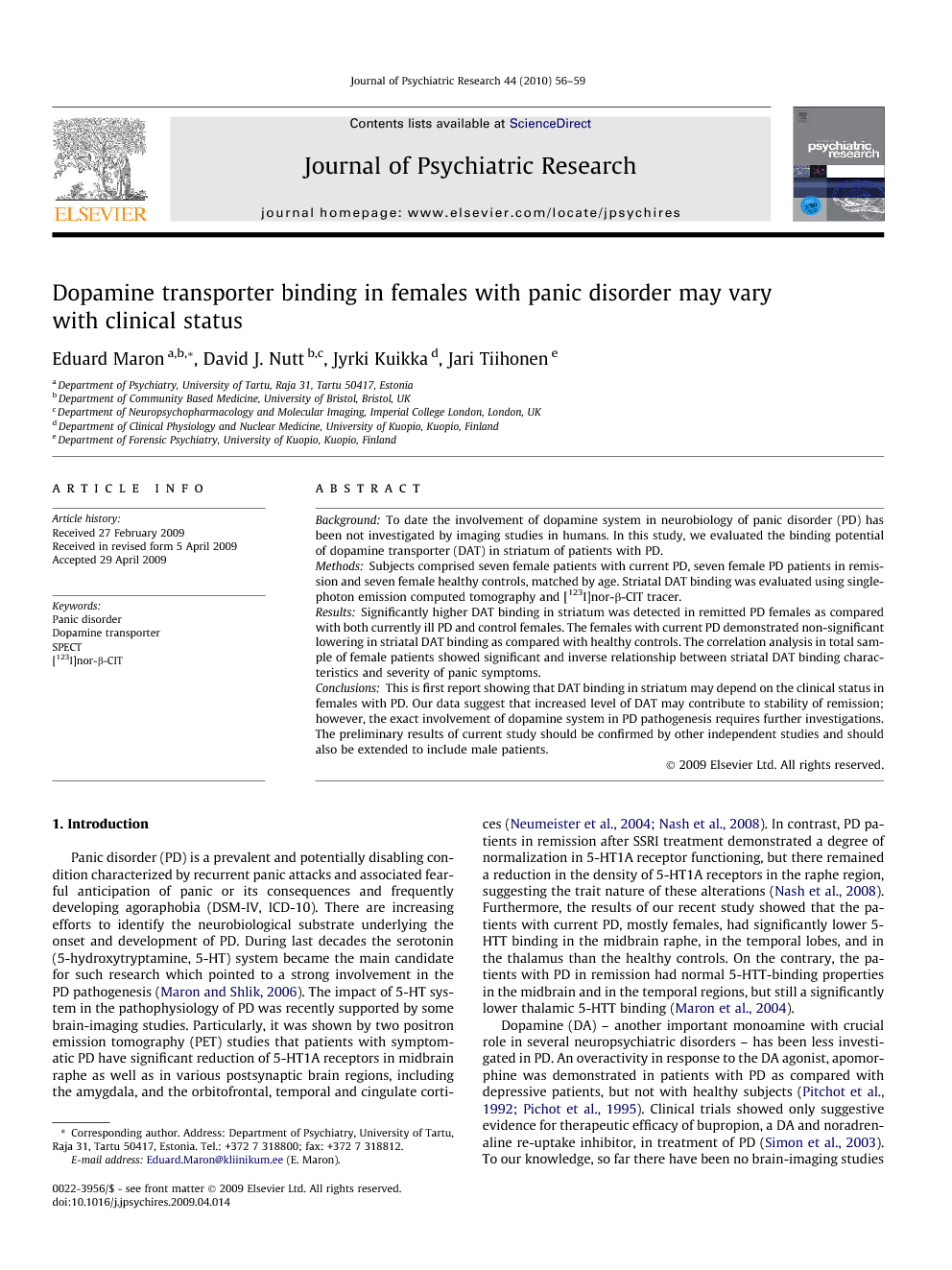 Background To date the involvement of dopamine system in neurobiology of panic disorder (PD) has been not investigated by imaging studies in humans. In this study, we evaluated the binding potential of dopamine transporter (DAT) in striatum of patients with PD. Methods Subjects comprised seven female patients with current PD, seven female PD patients in remission and seven female healthy controls, matched by age. Striatal DAT binding was evaluated using single-photon emission computed tomography and [123I]nor-β-CIT tracer. Results Significantly higher DAT binding in striatum was detected in remitted PD females as compared with both currently ill PD and control females. The females with current PD demonstrated non-significant lowering in striatal DAT binding as compared with healthy controls. The correlation analysis in total sample of female patients showed significant and inverse relationship between striatal DAT binding characteristics and severity of panic symptoms. Conclusions This is first report showing that DAT binding in striatum may depend on the clinical status in females with PD. Our data suggest that increased level of DAT may contribute to stability of remission; however, the exact involvement of dopamine system in PD pathogenesis requires further investigations. The preliminary results of current study should be confirmed by other independent studies and should also be extended to include male patients.

Panic disorder (PD) is a prevalent and potentially disabling condition characterized by recurrent panic attacks and associated fearful anticipation of panic or its consequences and frequently developing agoraphobia (DSM-IV, ICD-10). There are increasing efforts to identify the neurobiological substrate underlying the onset and development of PD. During last decades the serotonin (5-hydroxytryptamine, 5-HT) system became the main candidate for such research which pointed to a strong involvement in the PD pathogenesis (Maron and Shlik, 2006). The impact of 5-HT system in the pathophysiology of PD was recently supported by some brain-imaging studies. Particularly, it was shown by two positron emission tomography (PET) studies that patients with symptomatic PD have significant reduction of 5-HT1A receptors in midbrain raphe as well as in various postsynaptic brain regions, including the amygdala, and the orbitofrontal, temporal and cingulate cortices (Neumeister et al., 2004 and Nash et al., 2008). In contrast, PD patients in remission after SSRI treatment demonstrated a degree of normalization in 5-HT1A receptor functioning, but there remained a reduction in the density of 5-HT1A receptors in the raphe region, suggesting the trait nature of these alterations (Nash et al., 2008). Furthermore, the results of our recent study showed that the patients with current PD, mostly females, had significantly lower 5-HTT binding in the midbrain raphe, in the temporal lobes, and in the thalamus than the healthy controls. On the contrary, the patients with PD in remission had normal 5-HTT-binding properties in the midbrain and in the temporal regions, but still a significantly lower thalamic 5-HTT binding (Maron et al., 2004). Dopamine (DA) – another important monoamine with crucial role in several neuropsychiatric disorders – has been less investigated in PD. An overactivity in response to the DA agonist, apomorphine was demonstrated in patients with PD as compared with depressive patients, but not with healthy subjects (Pitchot et al., 1992 and Pichot et al., 1995). Clinical trials showed only suggestive evidence for therapeutic efficacy of bupropion, a DA and noradrenaline re-uptake inhibitor, in treatment of PD (Simon et al., 2003). To our knowledge, so far there have been no brain-imaging studies of the function of DA system in PD. In order to better understand the involvement of DA system in PD we re-analyzed our previous data on [123I]nor-β-CIT imaging in a PD sample but this time focusing on binding in the striatum where this tracer gives an estimate of the availability of the DA transporter [DAT] (Maron et al., 2004).