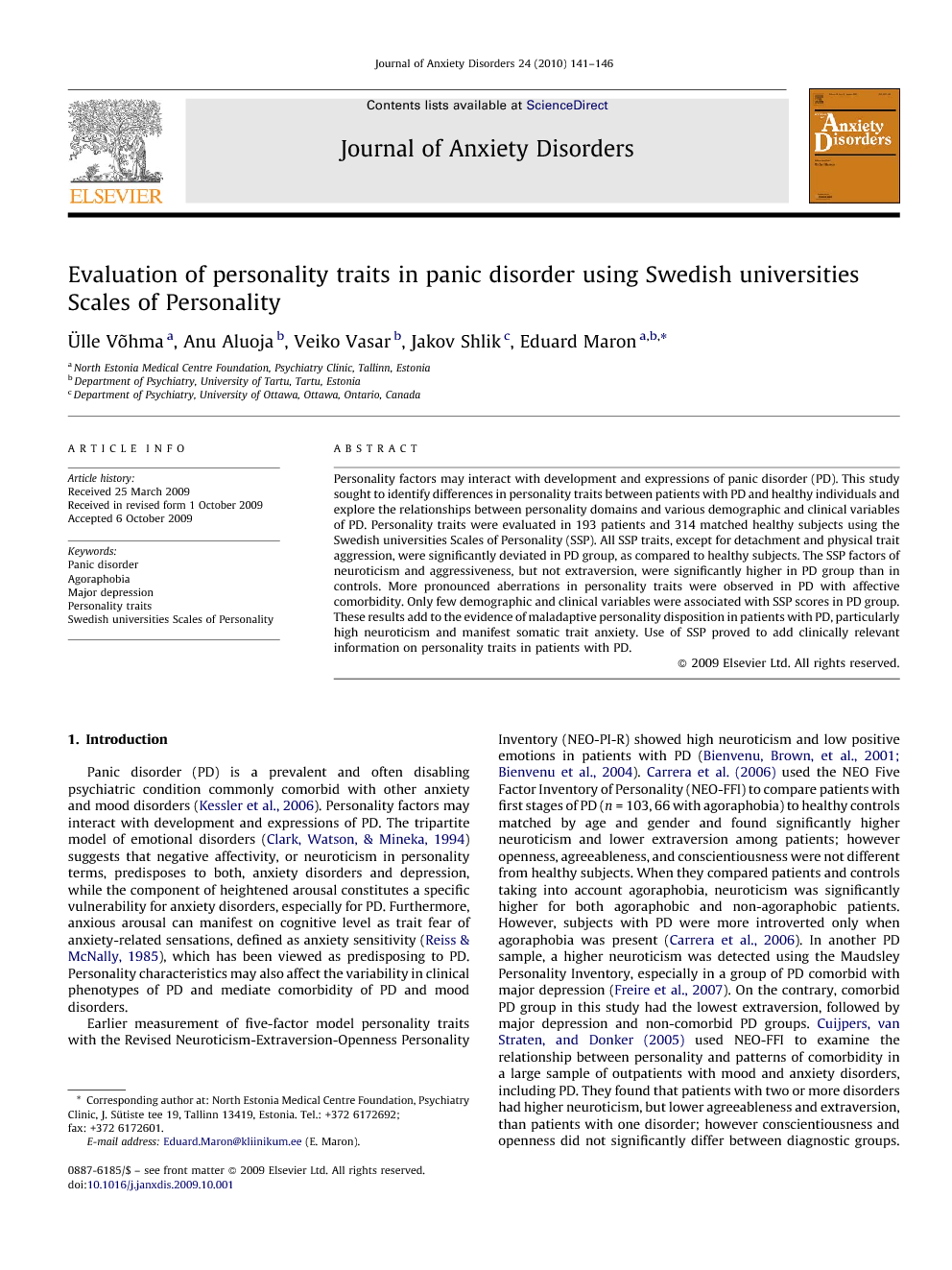 Personality factors may interact with development and expressions of panic disorder (PD). This study sought to identify differences in personality traits between patients with PD and healthy individuals and explore the relationships between personality domains and various demographic and clinical variables of PD. Personality traits were evaluated in 193 patients and 314 matched healthy subjects using the Swedish universities Scales of Personality (SSP). All SSP traits, except for detachment and physical trait aggression, were significantly deviated in PD group, as compared to healthy subjects. The SSP factors of neuroticism and aggressiveness, but not extraversion, were significantly higher in PD group than in controls. More pronounced aberrations in personality traits were observed in PD with affective comorbidity. Only few demographic and clinical variables were associated with SSP scores in PD group. These results add to the evidence of maladaptive personality disposition in patients with PD, particularly high neuroticism and manifest somatic trait anxiety. Use of SSP proved to add clinically relevant information on personality traits in patients with PD.

Panic disorder (PD) is a prevalent and often disabling psychiatric condition commonly comorbid with other anxiety and mood disorders (Kessler et al., 2006). Personality factors may interact with development and expressions of PD. The tripartite model of emotional disorders (Clark, Watson, & Mineka, 1994) suggests that negative affectivity, or neuroticism in personality terms, predisposes to both, anxiety disorders and depression, while the component of heightened arousal constitutes a specific vulnerability for anxiety disorders, especially for PD. Furthermore, anxious arousal can manifest on cognitive level as trait fear of anxiety-related sensations, defined as anxiety sensitivity (Reiss & McNally, 1985), which has been viewed as predisposing to PD. Personality characteristics may also affect the variability in clinical phenotypes of PD and mediate comorbidity of PD and mood disorders. Earlier measurement of five-factor model personality traits with the Revised Neuroticism-Extraversion-Openness Personality Inventory (NEO-PI-R) showed high neuroticism and low positive emotions in patients with PD (Bienvenu et al., 2001a and Bienvenu et al., 2004). Carrera et al. (2006) used the NEO Five Factor Inventory of Personality (NEO-FFI) to compare patients with first stages of PD (n = 103, 66 with agoraphobia) to healthy controls matched by age and gender and found significantly higher neuroticism and lower extraversion among patients; however openness, agreeableness, and conscientiousness were not different from healthy subjects. When they compared patients and controls taking into account agoraphobia, neuroticism was significantly higher for both agoraphobic and non-agoraphobic patients. However, subjects with PD were more introverted only when agoraphobia was present ( Carrera et al., 2006). In another PD sample, a higher neuroticism was detected using the Maudsley Personality Inventory, especially in a group of PD comorbid with major depression ( Freire et al., 2007). On the contrary, comorbid PD group in this study had the lowest extraversion, followed by major depression and non-comorbid PD groups. Cuijpers, van Straten, and Donker (2005) used NEO-FFI to examine the relationship between personality and patterns of comorbidity in a large sample of outpatients with mood and anxiety disorders, including PD. They found that patients with two or more disorders had higher neuroticism, but lower agreeableness and extraversion, than patients with one disorder; however conscientiousness and openness did not significantly differ between diagnostic groups. Additionally, significantly stronger harm avoidance was reported in PD patients with affective comorbidity as compared to those with pure PD ( Ampollini, Marchesi, Signifredi, & Maggini, 1997). Taken together, studies to date indicate some alterations in personality profiles of patients with PD, which are more pronounced in the presence of comorbid affective disorders. Considering that most of the cited studies included relatively small samples and provided only preliminary evidence, further more extensive investigations are warranted to evaluate the relationship between personality disposition and various clinical and related demographic factors in PD. The Swedish universities Scales of Personality (SSP) employed in this study is a self-rated questionnaire based on the Karolinska Scales of Personality (KSP) designed to measure stable personality traits related to psychopathology (Gustavsson et al., 2000). Similarly to KSP, SSP was not intended to assess the whole personality, but to cover several constructs relevant for psychobiological research. The anxiety-related scales of SSP originated from the two-factor theory of anxiety: somatic anxiety, referring to physiological symptoms and somatic complaints, and psychic anxiety referring to worry and restlessness (Buss, 1962). The aggression scales were based on the differentiation between the motor/instrumental, emotional, and cognitive components of aggressiveness (Buss, 1988). The Sjöbring (1958) temperament model was the starting point for assessment of sensation seeking, impulsivity and sociability. The final version of SSP comprised 13 scales assessing various aspects of trait anxiety, aggression, sensation seeking, impulse control, relation to social environment, and conformity. Factor analysis suggested that SSP measures three broader constructs: neuroticism, extraversion and aggressiveness (Gustavsson et al., 2000). Recently, we showed reliability and validity of the Estonian version of SSP in non-psychiatric population (Aluoja et al., 2009). The expected associations with the five basic factors of personality (Costa & McCrae, 1992) confirmed the validity of SSP. The SSP scales reflecting anxiety-proneness (somatic and psychic trait anxiety, stress susceptibility) and cognitive-affective facets of aggression (embitterment, irritability and mistrust) had strongest associations with Neuroticism assessed by the NEO-PI-R. Adventure seeking, low detachment and impulsiveness had highest correlations with Extraversion. Lack of assertiveness related equally with Extraversion and Neuroticism. All aggression-related scales and social desirability were associated with Agreeableness. NEO-PI-R dimensions Openness and Conscientiousness had weaker correlations with the SSP (Aluoja et al., 2009). The main objective of the present study was to identify differences in personality traits evaluated by SSP between patients with PD and healthy subjects. We also aimed to examine differences in personality dimensions between PD patients with and without affective comorbidity. Finally, we explored the relationship between SSP personality domains and various demographic and clinical variables of PD. We hypothesized that the patients with PD will demonstrate more pronounced anxiety-related personality traits on SSP and that the markers of complexity and course of PD will be associated with more deviations in SSP subscales and factors in a clinically meaningful and informing manner. In addition, our study sought to complement the existing body of evidence on the role of personality disposition in PD in an ethnically homogenous distinct population of Estonia.