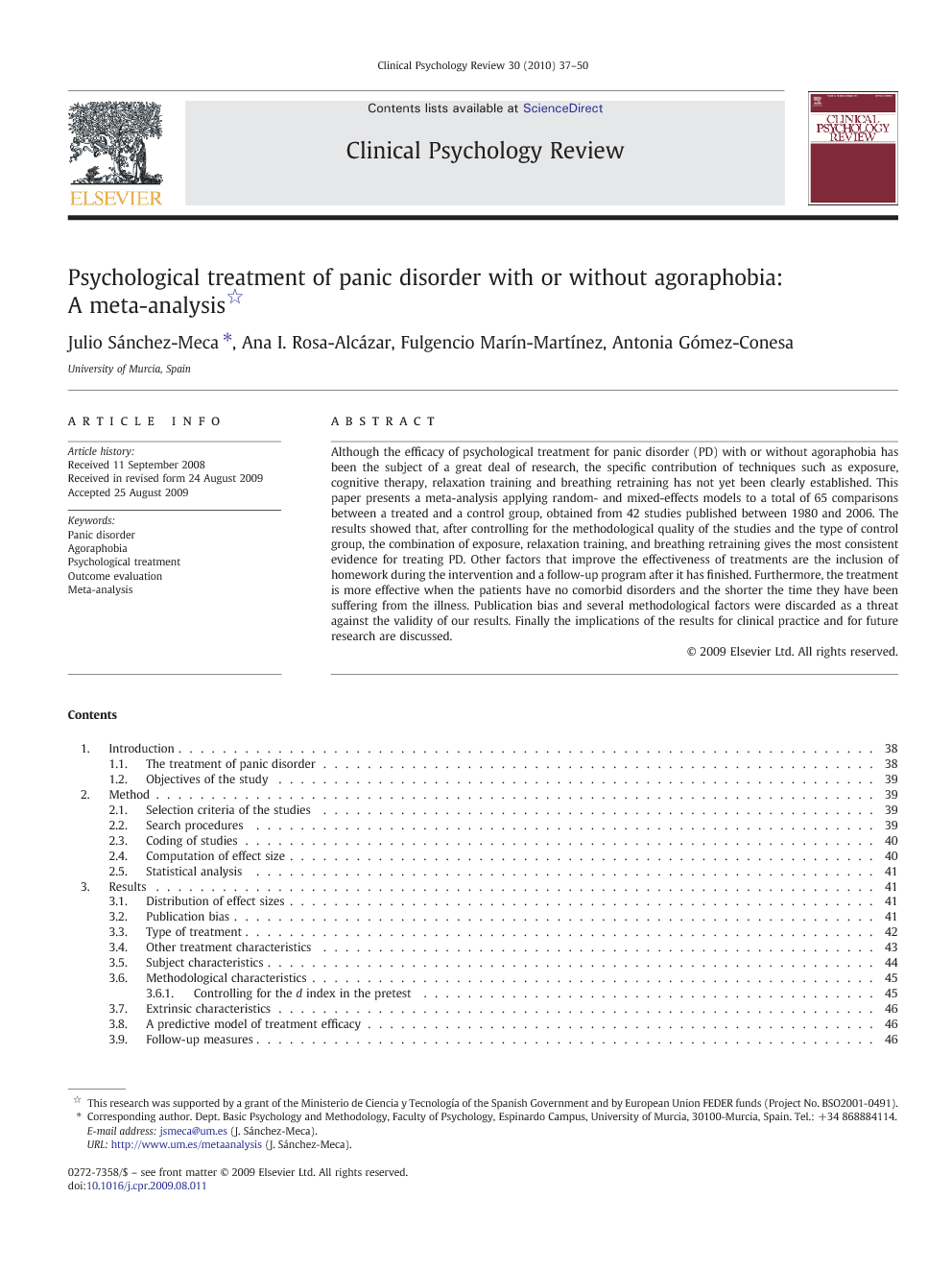 Although the efficacy of psychological treatment for panic disorder (PD) with or without agoraphobia has been the subject of a great deal of research, the specific contribution of techniques such as exposure, cognitive therapy, relaxation training and breathing retraining has not yet been clearly established. This paper presents a meta-analysis applying random- and mixed-effects models to a total of 65 comparisons between a treated and a control group, obtained from 42 studies published between 1980 and 2006. The results showed that, after controlling for the methodological quality of the studies and the type of control group, the combination of exposure, relaxation training, and breathing retraining gives the most consistent evidence for treating PD. Other factors that improve the effectiveness of treatments are the inclusion of homework during the intervention and a follow-up program after it has finished. Furthermore, the treatment is more effective when the patients have no comorbid disorders and the shorter the time they have been suffering from the illness. Publication bias and several methodological factors were discarded as a threat against the validity of our results. Finally the implications of the results for clinical practice and for future research are discussed.

Initially called agoraphobia with panic attacks (American Psychiatric Association, 1980), and later renamed panic disorder (PD) with or without agoraphobia (American Psychiatric Association (APA), 1987, American Psychiatric Association (APA), 1994 and American Psychiatric Association (APA), 2004), PD is one of the most researched anxiety disorders due to its high rate of lifetime prevalence (about 5.1% of adults in USA; Bienvenu, 2006). PD is characterized by its resistance to spontaneous remission, its comorbidity with other disorders (e.g., depression, alcohol or substance disorders), and the decrease in quality of life. Additionally, PD can have serious social and economic consequences, since a large percentage of individuals with PD suffer social isolation and many of them have to give up work (Klerman et al., 1991, Mitte, 2005 and Tsao et al., 2005). In order to be diagnosed with PD a patient must have suffered recurrent and unexpected panic attacks over a minimum period of a month, followed by persistent concern about having additional attacks. Panic attacks are commonly accompanied by uncontrollable fear, worry about the implications of the attacks (e.g., losing control, having a heart attack), or a significant change in behavior relating to these symptoms. Furthermore, the attacks are not due to the direct effects of substance abuse or to a medical condition, and they cannot be explained by the presence of another mental illness. On the other hand, panic attacks often come together with agoraphobia, that is, an uncontrollable fear of having a panic attack in a setting from which it may be difficult to escape or receive help. About one in three people with PD develops agoraphobia, but agoraphobia without a history of panic attacks is very uncommon, with a lifetime prevalence of about 0.17% (Bienvenu, 2006).