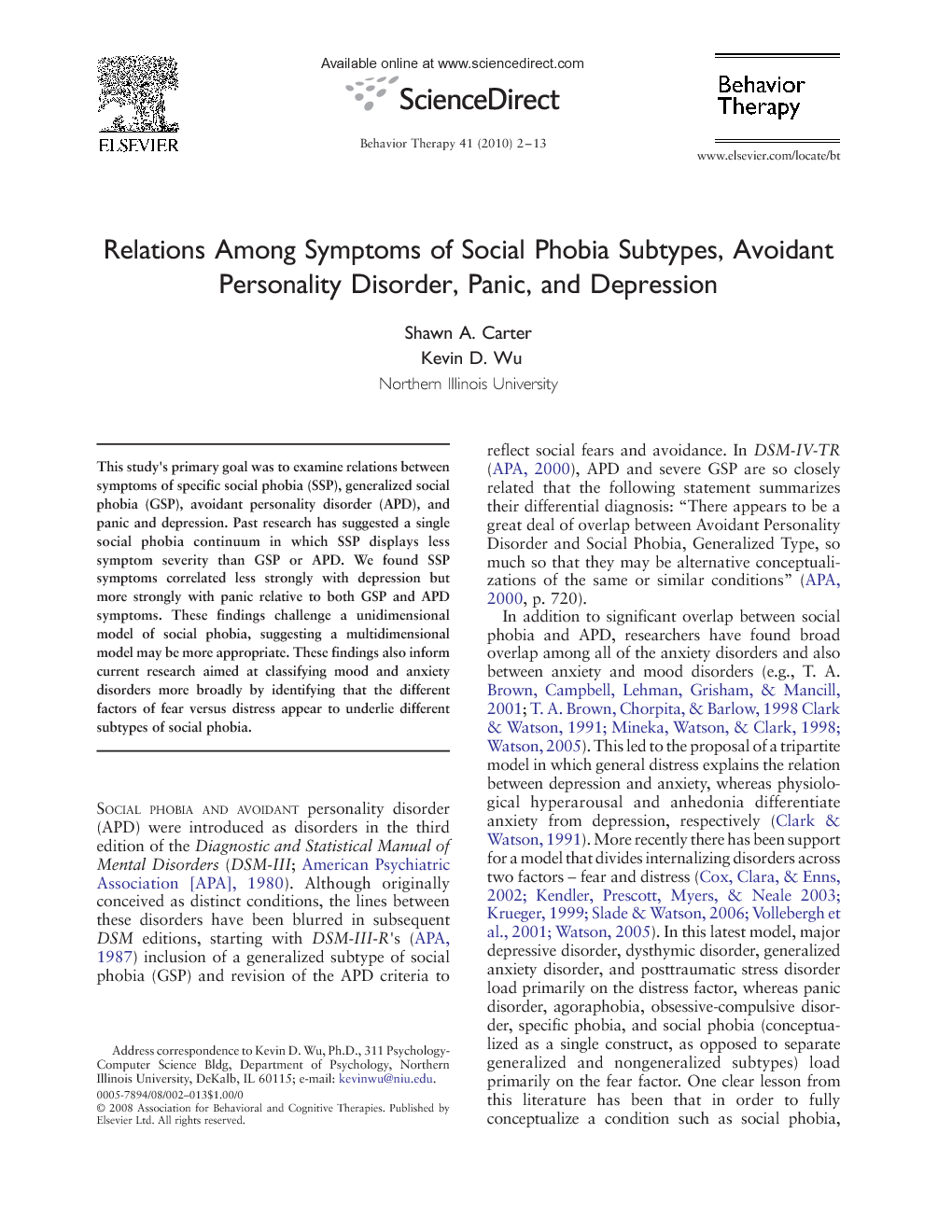 This study's primary goal was to examine relations between symptoms of specific social phobia (SSP), generalized social phobia (GSP), avoidant personality disorder (APD), and panic and depression. Past research has suggested a single social phobia continuum in which SSP displays less symptom severity than GSP or APD. We found SSP symptoms correlated less strongly with depression but more strongly with panic relative to both GSP and APD symptoms. These findings challenge a unidimensional model of social phobia, suggesting a multidimensional model may be more appropriate. These findings also inform current research aimed at classifying mood and anxiety disorders more broadly by identifying that the different factors of fear versus distress appear to underlie different subtypes of social phobia.

Social phobia and avoidant personality disorder (APD) were introduced as disorders in the third edition of the Diagnostic and Statistical Manual of Mental Disorders (DSM-III; American Psychiatric Association [APA], 1980). Although originally conceived as distinct conditions, the lines between these disorders have been blurred in subsequent DSM editions, starting with DSM-III-R's ( APA, 1987) inclusion of a generalized subtype of social phobia (GSP) and revision of the APD criteria to reflect social fears and avoidance. In DSM-IV-TR ( APA, 2000), APD and severe GSP are so closely related that the following statement summarizes their differential diagnosis: “There appears to be a great deal of overlap between Avoidant Personality Disorder and Social Phobia, Generalized Type, so much so that they may be alternative conceptualizations of the same or similar conditions” ( APA, 2000, p. 720). In addition to significant overlap between social phobia and APD, researchers have found broad overlap among all of the anxiety disorders and also between anxiety and mood disorders (e.g., T. A. Brown, Campbell, Lehman, Grisham, & Mancill, 2001; T. A. Brown, Chorpita, & Barlow, 1998Clark and Watson, 1991, Mineka et al., 1998 and Watson, 2005). This led to the proposal of a tripartite model in which general distress explains the relation between depression and anxiety, whereas physiological hyperarousal and anhedonia differentiate anxiety from depression, respectively (Clark & Watson, 1991). More recently there has been support for a model that divides internalizing disorders across two factors – fear and distress (Cox et al., 2002, Kendler et al., 2003, Krueger, 1999, Slade and Watson, 2006, Vollebergh et al., 2001 and Watson, 2005). In this latest model, major depressive disorder, dysthymic disorder, generalized anxiety disorder, and posttraumatic stress disorder load primarily on the distress factor, whereas panic disorder, agoraphobia, obsessive-compulsive disorder, specific phobia, and social phobia (conceptualized as a single construct, as opposed to separate generalized and nongeneralized subtypes) load primarily on the fear factor. One clear lesson from this literature has been that in order to fully conceptualize a condition such as social phobia, one must understand its relations with other disorders.