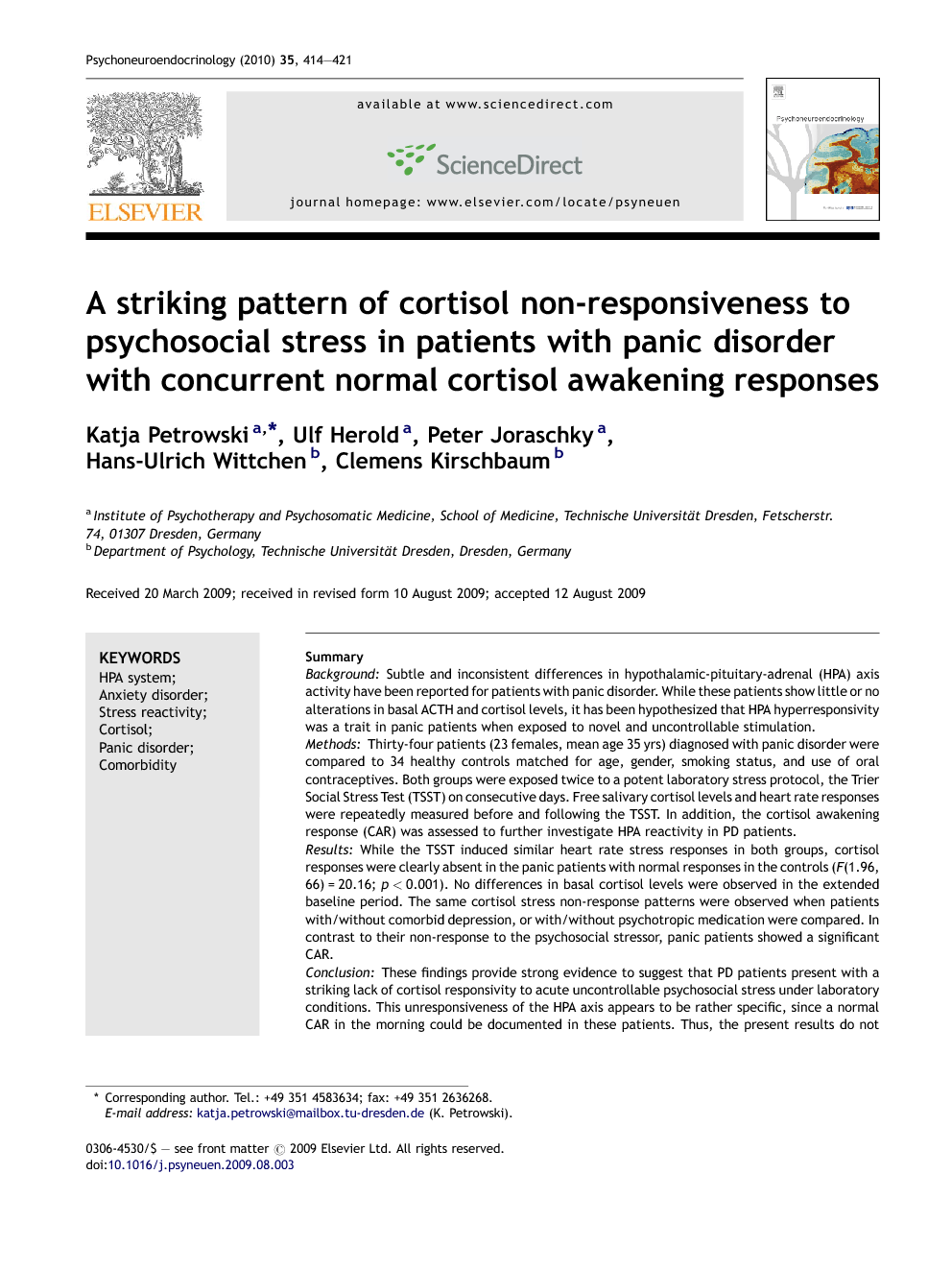 Background Subtle and inconsistent differences in hypothalamic-pituitary-adrenal (HPA) axis activity have been reported for patients with panic disorder. While these patients show little or no alterations in basal ACTH and cortisol levels, it has been hypothesized that HPA hyperresponsivity was a trait in panic patients when exposed to novel and uncontrollable stimulation. Methods Thirty-four patients (23 females, mean age 35 yrs) diagnosed with panic disorder were compared to 34 healthy controls matched for age, gender, smoking status, and use of oral contraceptives. Both groups were exposed twice to a potent laboratory stress protocol, the Trier Social Stress Test (TSST) on consecutive days. Free salivary cortisol levels and heart rate responses were repeatedly measured before and following the TSST. In addition, the cortisol awakening response (CAR) was assessed to further investigate HPA reactivity in PD patients. Results While the TSST induced similar heart rate stress responses in both groups, cortisol responses were clearly absent in the panic patients with normal responses in the controls (F(1.96, 66) = 20.16; p < 0.001). No differences in basal cortisol levels were observed in the extended baseline period. The same cortisol stress non-response patterns were observed when patients with/without comorbid depression, or with/without psychotropic medication were compared. In contrast to their non-response to the psychosocial stressor, panic patients showed a significant CAR. Conclusion These findings provide strong evidence to suggest that PD patients present with a striking lack of cortisol responsivity to acute uncontrollable psychosocial stress under laboratory conditions. This unresponsiveness of the HPA axis appears to be rather specific, since a normal CAR in the morning could be documented in these patients. Thus, the present results do not support the hypothesis that PD patients show a trait HPA hyperresponsiveness to novel and uncontrollable stimulation. In contrast, the data provide support for a hyporesponsive HPA axis under emotional stress in PD patients.

Panic disorder is defined as a clinical condition in which the patients experience recurrent episodes of panic attacks and constant concern of future attacks. It is a common disorder with significant burden of suffering for the individual and significant economic costs for the society, respectively (Greenberg et al., 1999). The disease has been linked to increased mortality and cardiovascular disease (Albert et al., 2005 and Smoller et al., 2005). Among a multitude of other bodily systems, considerable research efforts have tried to associate panic disorder with an abnormal functioning of the hypothalamic-pituitary-adrenal system (HPA). While some reports suggested increased basal cortisol production, blunted ACTH and cortisol responses to CRH infusion, along with subtle differences in feedback sensitivity of the axis (Roy-Byrne et al., 1986, Holsboer et al., 1987, Gurguis et al., 1991, Schreiber et al., 1996, Erhardt et al., 2006 and Abelson et al., 2007), findings have remained inconsistent throughout the past 20 years. Furthermore, studies of naturally occurring panic attacks showed that these attacks occur without an apparent secretory episode of cortisol in most instances (Cameron et al., 1987 and Bandelow et al., 2000). This eminent lack of cortisol response to a situation often perceived by the patients as life threatening is puzzling, since HPA activity is well known to rapidly increase in times of threat or harmful stimulation (Mason, 1968). However, most patients studied for acute endocrine responses to panic attacks (naturally or in the lab) had experienced dozens of attacks before. Thus, it is tempting to speculate that the cortisol non-response to acute panic attacks simply reflects successful habituation to repeated stimulation by complex emotional events. In healthy volunteers, rapid habituation of cortisol responses can be observed when subjects are repeatedly exposed to stressful stimuli in the same environmental context (Kirschbaum et al., 1995 and Schommer et al., 2003). Habituation of cortisol stress responses under such conditions indicate a decrease in novelty, unpredictability, and uncontrollability of the situation. Summarizing the contradictory and inconsistent findings on HPA abnormalities in patients suffering from panic disorder, Abelson et al. (2007) concluded that this disorder is characterized by an enhanced sensitivity to novelty with a heightened fear of panic in unfamiliar environments. They hypothesized that in response to novel experimental contexts panic disorder patients would therefore display an enhanced HPA reactivity. Unfortunately, the literature on acute ACTH or cortisol responses to such stimuli involving novel, uncontrollable, and threatening experiences is sparse at best. Only three published studies so far investigated HPA responses to psychosocial challenge (Leyton et al., 1996, Hoehn et al., 1997 and Garcia-Leal et al., 2005). However, none of the stimulation protocols employed in these studies lead to significant cortisol elevations in either, panic patients or control subjects. In order to test the hypothesis of a heightened HPA responsiveness to novel, uncontrollable, and threatening stimuli in panic disorder patients, we used a well-established psychosocial stress paradigm, the Trier Social Stress Test (TSST; Kirschbaum et al., 1993). In a recent meta analysis, the TSST has been found to be among the most potent manipulations for the induction of acute cortisol responses under laboratory conditions (Dickerson and Kemeny, 2004). With healthy adolescents or adults, the TSST yields an average responder rate of 75–80% of all subjects tested. Thus, this protocol appeared well suited for an appropriate investigation of putative HPA response differences in patients with panic disorder.