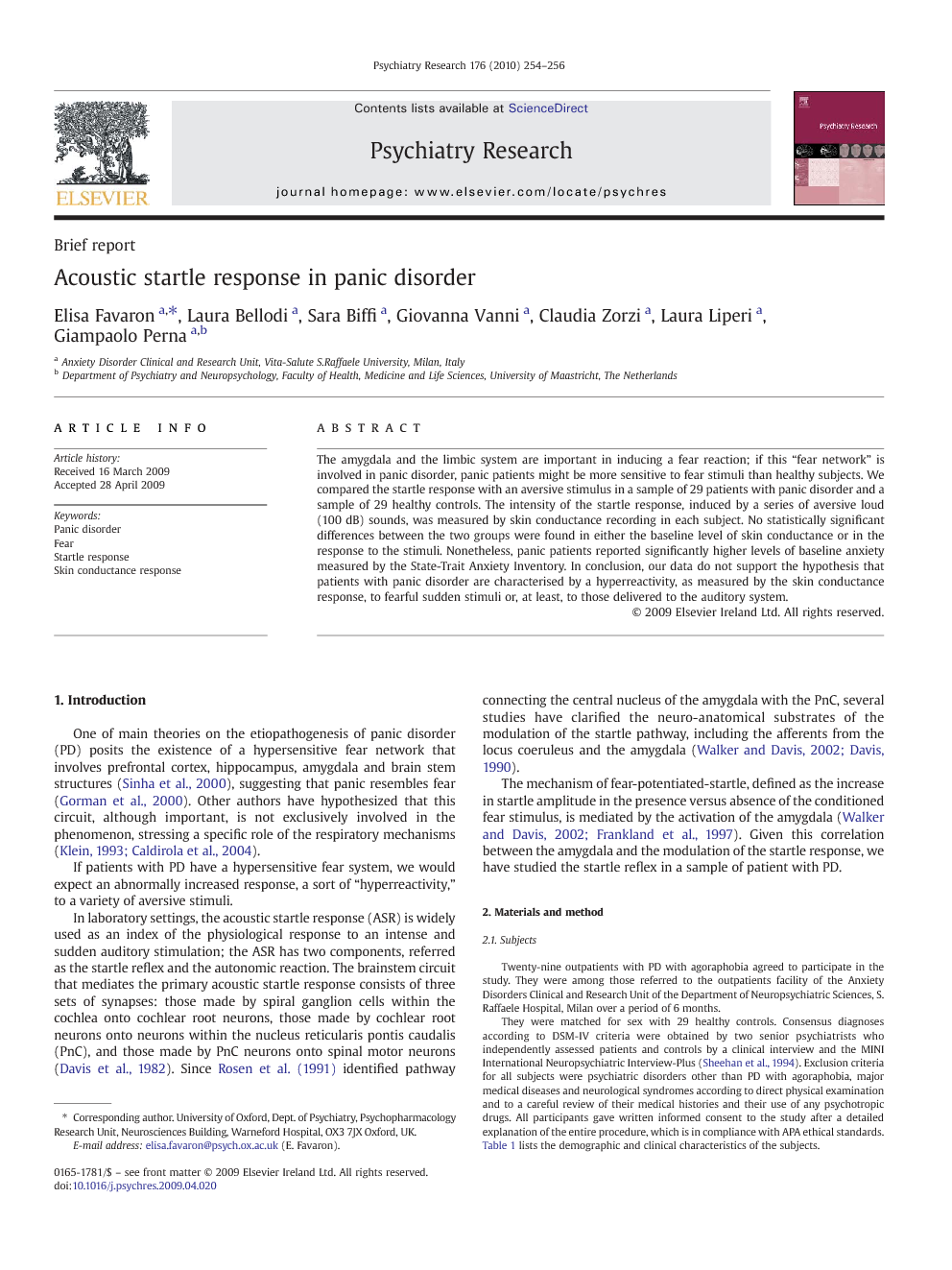 The amygdala and the limbic system are important in inducing a fear reaction; if this “fear network” is involved in panic disorder, panic patients might be more sensitive to fear stimuli than healthy subjects. We compared the startle response with an aversive stimulus in a sample of 29 patients with panic disorder and a sample of 29 healthy controls. The intensity of the startle response, induced by a series of aversive loud (100 dB) sounds, was measured by skin conductance recording in each subject. No statistically significant differences between the two groups were found in either the baseline level of skin conductance or in the response to the stimuli. Nonetheless, panic patients reported significantly higher levels of baseline anxiety measured by the State-Trait Anxiety Inventory. In conclusion, our data do not support the hypothesis that patients with panic disorder are characterised by a hyperreactivity, as measured by the skin conductance response, to fearful sudden stimuli or, at least, to those delivered to the auditory system.

One of main theories on the etiopathogenesis of panic disorder (PD) posits the existence of a hypersensitive fear network that involves prefrontal cortex, hippocampus, amygdala and brain stem structures (Sinha et al., 2000), suggesting that panic resembles fear (Gorman et al., 2000). Other authors have hypothesized that this circuit, although important, is not exclusively involved in the phenomenon, stressing a specific role of the respiratory mechanisms (Klein, 1993 and Caldirola et al., 2004). If patients with PD have a hypersensitive fear system, we would expect an abnormally increased response, a sort of “hyperreactivity,” to a variety of aversive stimuli. In laboratory settings, the acoustic startle response (ASR) is widely used as an index of the physiological response to an intense and sudden auditory stimulation; the ASR has two components, referred as the startle reflex and the autonomic reaction. The brainstem circuit that mediates the primary acoustic startle response consists of three sets of synapses: those made by spiral ganglion cells within the cochlea onto cochlear root neurons, those made by cochlear root neurons onto neurons within the nucleus reticularis pontis caudalis (PnC), and those made by PnC neurons onto spinal motor neurons (Davis et al., 1982). Since Rosen et al. (1991) identified pathway connecting the central nucleus of the amygdala with the PnC, several studies have clarified the neuro-anatomical substrates of the modulation of the startle pathway, including the afferents from the locus coeruleus and the amygdala (Walker and Davis, 2002 and Davis, 1990). The mechanism of fear-potentiated-startle, defined as the increase in startle amplitude in the presence versus absence of the conditioned fear stimulus, is mediated by the activation of the amygdala (Walker and Davis, 2002 and Frankland et al., 1997). Given this correlation between the amygdala and the modulation of the startle response, we have studied the startle reflex in a sample of patient with PD.