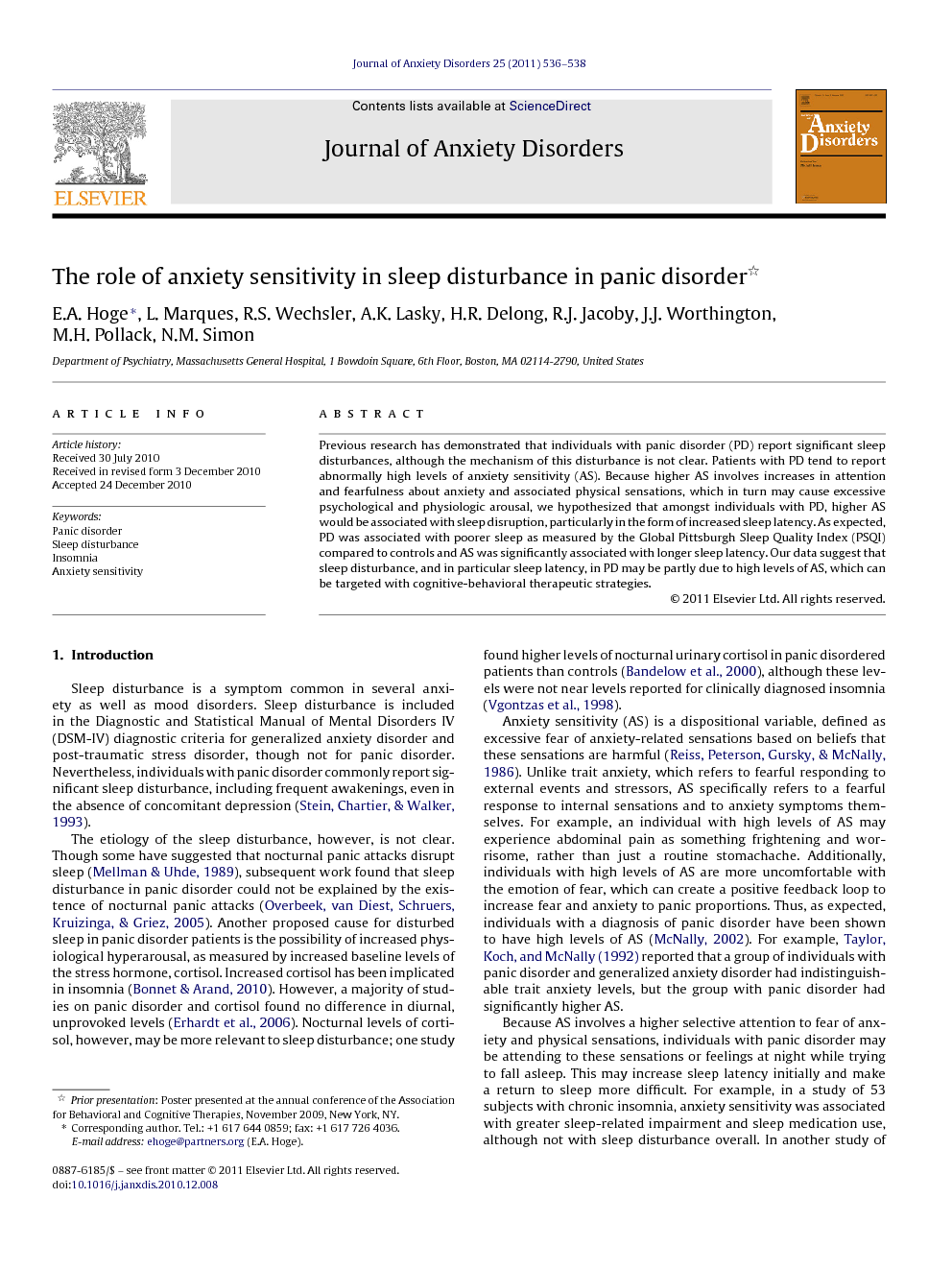 Previous research has demonstrated that individuals with panic disorder (PD) report significant sleep disturbances, although the mechanism of this disturbance is not clear. Patients with PD tend to report abnormally high levels of anxiety sensitivity (AS). Because higher AS involves increases in attention and fearfulness about anxiety and associated physical sensations, which in turn may cause excessive psychological and physiologic arousal, we hypothesized that amongst individuals with PD, higher AS would be associated with sleep disruption, particularly in the form of increased sleep latency. As expected, PD was associated with poorer sleep as measured by the Global Pittsburgh Sleep Quality Index (PSQI) compared to controls and AS was significantly associated with longer sleep latency. Our data suggest that sleep disturbance, and in particular sleep latency, in PD may be partly due to high levels of AS, which can be targeted with cognitive-behavioral therapeutic strategies.

Sleep disturbance is a symptom common in several anxiety as well as mood disorders. Sleep disturbance is included in the Diagnostic and Statistical Manual of Mental Disorders IV (DSM-IV) diagnostic criteria for generalized anxiety disorder and post-traumatic stress disorder, though not for panic disorder. Nevertheless, individuals with panic disorder commonly report significant sleep disturbance, including frequent awakenings, even in the absence of concomitant depression (Stein, Chartier, & Walker, 1993). The etiology of the sleep disturbance, however, is not clear. Though some have suggested that nocturnal panic attacks disrupt sleep (Mellman & Uhde, 1989), subsequent work found that sleep disturbance in panic disorder could not be explained by the existence of nocturnal panic attacks (Overbeek, van Diest, Schruers, Kruizinga, & Griez, 2005). Another proposed cause for disturbed sleep in panic disorder patients is the possibility of increased physiological hyperarousal, as measured by increased baseline levels of the stress hormone, cortisol. Increased cortisol has been implicated in insomnia (Bonnet & Arand, 2010). However, a majority of studies on panic disorder and cortisol found no difference in diurnal, unprovoked levels (Erhardt et al., 2006). Nocturnal levels of cortisol, however, may be more relevant to sleep disturbance; one study found higher levels of nocturnal urinary cortisol in panic disordered patients than controls (Bandelow et al., 2000), although these levels were not near levels reported for clinically diagnosed insomnia (Vgontzas et al., 1998). Anxiety sensitivity (AS) is a dispositional variable, defined as excessive fear of anxiety-related sensations based on beliefs that these sensations are harmful (Reiss, Peterson, Gursky, & McNally, 1986). Unlike trait anxiety, which refers to fearful responding to external events and stressors, AS specifically refers to a fearful response to internal sensations and to anxiety symptoms themselves. For example, an individual with high levels of AS may experience abdominal pain as something frightening and worrisome, rather than just a routine stomachache. Additionally, individuals with high levels of AS are more uncomfortable with the emotion of fear, which can create a positive feedback loop to increase fear and anxiety to panic proportions. Thus, as expected, individuals with a diagnosis of panic disorder have been shown to have high levels of AS (McNally, 2002). For example, Taylor, Koch, and McNally (1992) reported that a group of individuals with panic disorder and generalized anxiety disorder had indistinguishable trait anxiety levels, but the group with panic disorder had significantly higher AS. Because AS involves a higher selective attention to fear of anxiety and physical sensations, individuals with panic disorder may be attending to these sensations or feelings at night while trying to fall asleep. This may increase sleep latency initially and make a return to sleep more difficult. For example, in a study of 53 subjects with chronic insomnia, anxiety sensitivity was associated with greater sleep-related impairment and sleep medication use, although not with sleep disturbance overall. In another study of non-anxious individuals who experienced frequent nightmares, AS was correlated with distress from the nightmares although not with nightmare frequency itself (Levin, Lantz, Fireman, & Spendlove, 2009). However, the relationship between AS and sleep, and sleep latency specifically, has not been examined in anxiety disorders. We hypothesized that in panic disorder, AS would be associated with sleep disturbance, and especially sleep latency.