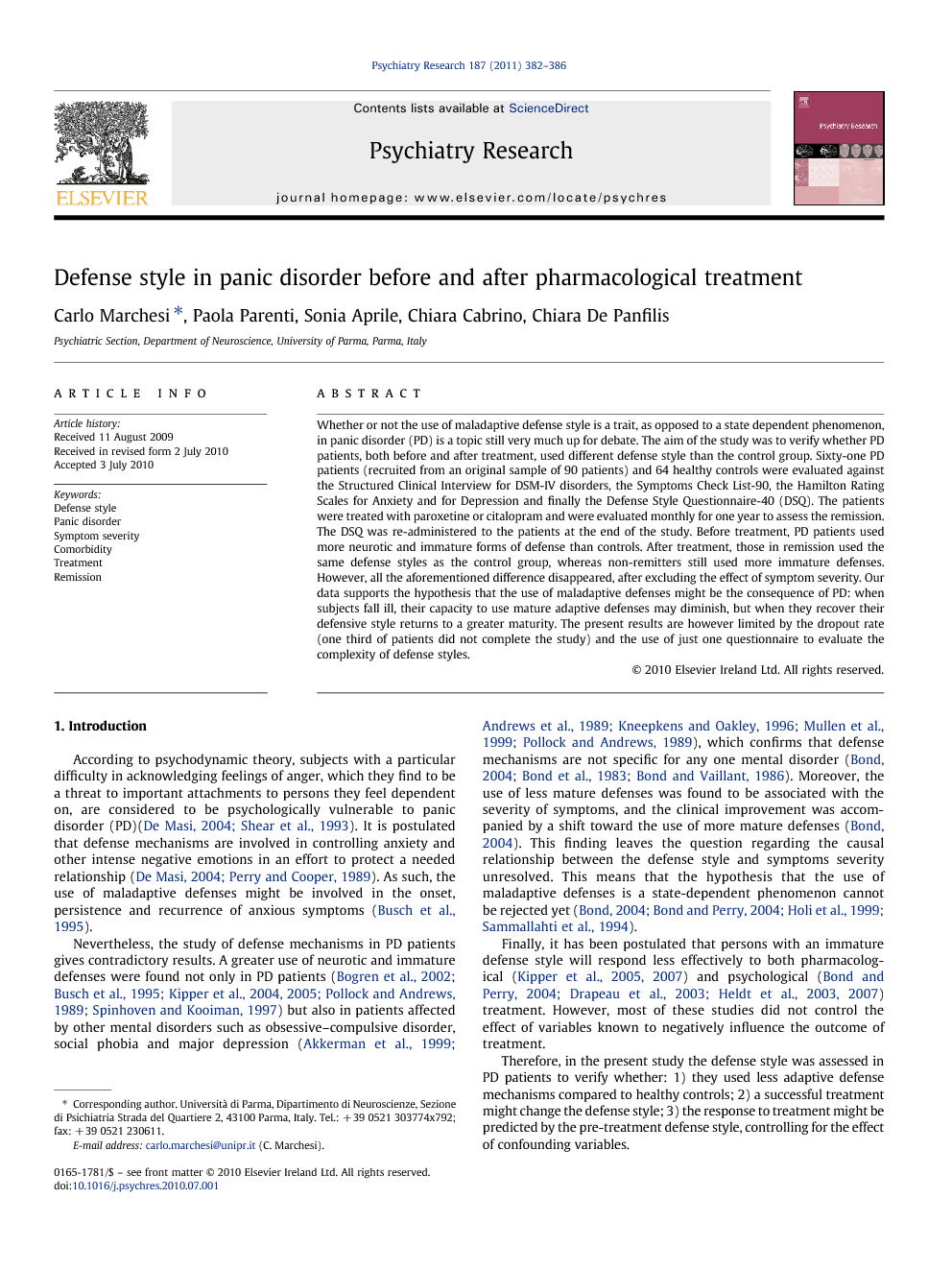 Whether or not the use of maladaptive defense style is a trait, as opposed to a state dependent phenomenon, in panic disorder (PD) is a topic still very much up for debate. The aim of the study was to verify whether PD patients, both before and after treatment, used different defense style than the control group. Sixty-one PD patients (recruited from an original sample of 90 patients) and 64 healthy controls were evaluated against the Structured Clinical Interview for DSM-IV disorders, the Symptoms Check List-90, the Hamilton Rating Scales for Anxiety and for Depression and finally the Defense Style Questionnaire-40 (DSQ). The patients were treated with paroxetine or citalopram and were evaluated monthly for one year to assess the remission. The DSQ was re-administered to the patients at the end of the study. Before treatment, PD patients used more neurotic and immature forms of defense than controls. After treatment, those in remission used the same defense styles as the control group, whereas non-remitters still used more immature defenses. However, all the aforementioned difference disappeared, after excluding the effect of symptom severity. Our data supports the hypothesis that the use of maladaptive defenses might be the consequence of PD: when subjects fall ill, their capacity to use mature adaptive defenses may diminish, but when they recover their defensive style returns to a greater maturity. The present results are however limited by the dropout rate (one third of patients did not complete the study) and the use of just one questionnaire to evaluate the complexity of defense styles.

According to psychodynamic theory, subjects with a particular difficulty in acknowledging feelings of anger, which they find to be a threat to important attachments to persons they feel dependent on, are considered to be psychologically vulnerable to panic disorder (PD)(De Masi, 2004 and Shear et al., 1993). It is postulated that defense mechanisms are involved in controlling anxiety and other intense negative emotions in an effort to protect a needed relationship (De Masi, 2004 and Perry and Cooper, 1989). As such, the use of maladaptive defenses might be involved in the onset, persistence and recurrence of anxious symptoms (Busch et al., 1995). Nevertheless, the study of defense mechanisms in PD patients gives contradictory results. A greater use of neurotic and immature defenses were found not only in PD patients (Bogren et al., 2002, Busch et al., 1995, Kipper et al., 2004, Kipper et al., 2005, Pollock and Andrews, 1989 and Spinhoven and Kooiman, 1997) but also in patients affected by other mental disorders such as obsessive–compulsive disorder, social phobia and major depression (Akkerman et al., 1999, Andrews et al., 1989, Kneepkens and Oakley, 1996, Mullen et al., 1999 and Pollock and Andrews, 1989), which confirms that defense mechanisms are not specific for any one mental disorder (Bond, 2004, Bond et al., 1983 and Bond and Vaillant, 1986). Moreover, the use of less mature defenses was found to be associated with the severity of symptoms, and the clinical improvement was accompanied by a shift toward the use of more mature defenses (Bond, 2004). This finding leaves the question regarding the causal relationship between the defense style and symptoms severity unresolved. This means that the hypothesis that the use of maladaptive defenses is a state-dependent phenomenon cannot be rejected yet (Bond, 2004, Bond and Perry, 2004, Holi et al., 1999 and Sammallahti et al., 1994). Finally, it has been postulated that persons with an immature defense style will respond less effectively to both pharmacological (Kipper et al., 2005 and Kipper et al., 2007) and psychological (Bond and Perry, 2004, Drapeau et al., 2003, Heldt et al., 2003 and Heldt et al., 2007) treatment. However, most of these studies did not control the effect of variables known to negatively influence the outcome of treatment. Therefore, in the present study the defense style was assessed in PD patients to verify whether: 1) they used less adaptive defense mechanisms compared to healthy controls; 2) a successful treatment might change the defense style; 3) the response to treatment might be predicted by the pre-treatment defense style, controlling for the effect of confounding variables.