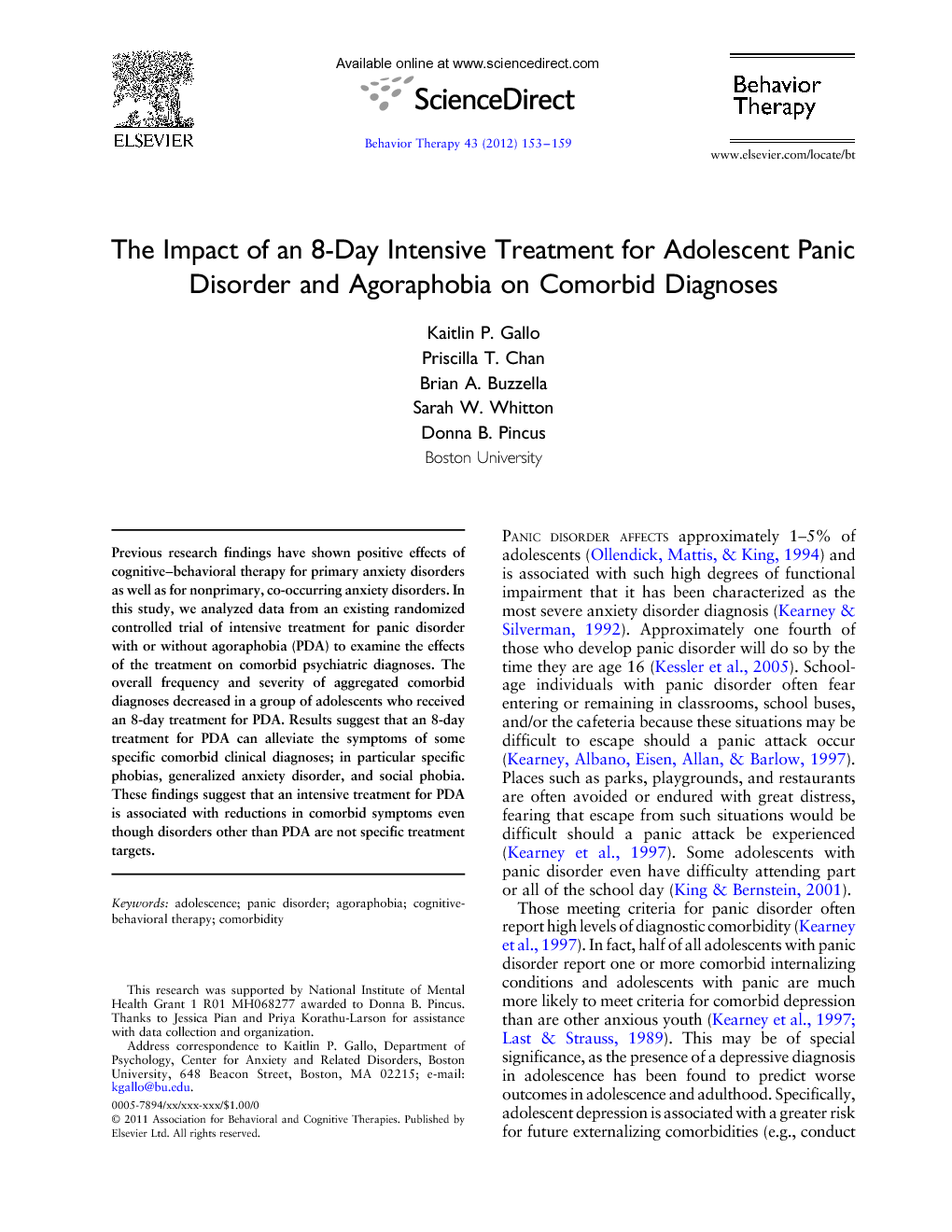 Previous research findings have shown positive effects of cognitive–behavioral therapy for primary anxiety disorders as well as for nonprimary, co-occurring anxiety disorders. In this study, we analyzed data from an existing randomized controlled trial of intensive treatment for panic disorder with or without agoraphobia (PDA) to examine the effects of the treatment on comorbid psychiatric diagnoses. The overall frequency and severity of aggregated comorbid diagnoses decreased in a group of adolescents who received an 8-day treatment for PDA. Results suggest that an 8-day treatment for PDA can alleviate the symptoms of some specific comorbid clinical diagnoses; in particular specific phobias, generalized anxiety disorder, and social phobia. These findings suggest that an intensive treatment for PDA is associated with reductions in comorbid symptoms even though disorders other than PDA are not specific treatment targets.

Panic disorder affects approximately 1–5% of adolescents (Ollendick, Mattis, & King, 1994) and is associated with such high degrees of functional impairment that it has been characterized as the most severe anxiety disorder diagnosis (Kearney & Silverman, 1992). Approximately one fourth of those who develop panic disorder will do so by the time they are age 16 (Kessler et al., 2005). School-age individuals with panic disorder often fear entering or remaining in classrooms, school buses, and/or the cafeteria because these situations may be difficult to escape should a panic attack occur (Kearney, Albano, Eisen, Allan, & Barlow, 1997). Places such as parks, playgrounds, and restaurants are often avoided or endured with great distress, fearing that escape from such situations would be difficult should a panic attack be experienced (Kearney et al., 1997). Some adolescents with panic disorder even have difficulty attending part or all of the school day (King & Bernstein, 2001). Those meeting criteria for panic disorder often report high levels of diagnostic comorbidity (Kearney et al., 1997). In fact, half of all adolescents with panic disorder report one or more comorbid internalizing conditions and adolescents with panic are much more likely to meet criteria for comorbid depression than are other anxious youth (Kearney et al., 1997 and Last and Strauss, 1989). This may be of special significance, as the presence of a depressive diagnosis in adolescence has been found to predict worse outcomes in adolescence and adulthood. Specifically, adolescent depression is associated with a greater risk for future externalizing comorbidities (e.g., conduct disorder; Weissman et al., 1999) and is associated with higher rates of suicidality and depression in adulthood (Harrington, Bredenkamp, Groothues, & Rutter, 1994). Therefore, ideal interventions for panic disorder should also impact those diagnostic comorbidities that commonly co-occur. Weekly cognitive–behavioral interventions have been found to be highly efficacious in the amelioration of a wide range of anxiety disorder diagnoses including panic disorder (Kendall et al., 2001 and Pincus et al., 2010). There is even evidence that the delivery of disorder-specific cognitive–behavioral interventions is associated with reductions in the frequency and severity of comorbid internalizing diagnoses (Ishikawa et al., 2007 and Kendall et al., 2001). In a previous investigation of the efficacy of a manualized, 11-week, cognitive–behavioral intervention for adolescent panic disorder (Panic Control Treatment for Adolescents; Pincus, May, et al., 2010), adolescents displayed significant reductions in their panic symptomatology as well as in other comorbid anxious and depressive symptoms following completion of the intervention. Despite these gains, many of the adolescents who received the 11-week intervention for panic disorder (Pincus, May, et al., 2010), explained that they would have liked to experience a reduction in panic symptoms more quickly than was possible in an 11-session treatment (delivered over approximately 3 months), given the impact that the panic symptoms had on their ability to participate in developmentally appropriate tasks. In response to such concerns, an intensive treatment approach was developed to provide adolescents with the cognitive–behavioral skills to alleviate their symptoms of panic in a condensed amount of time (8 consecutive days; Angelosante, Pincus, Whitton, Cheron, & Pian, 2009). In recent years, a number of different intensive treatments have been developed for a range of anxiety disorder diagnoses (e.g., specific phobia; Davis, Ollendick, & Öst, 2009; social anxiety disorder; Mörtberg, Karlsson, Fyring, & Sundin, 2006; and obsessive–compulsive disorder [OCD]; Storch et al., 2007 and Whiteside and Jacobsen, 2010). These intensive interventions tend to provide many of the same cognitive–behavioral skills included in traditional weekly therapies, although they are provided across a highly condensed time. Preliminary evidence generated through single-case designs and small open-trial evaluations suggests that interventions such as these are promising and are associated with significant reductions in the severity of the anxiety disorder diagnoses targeted in treatment (Deacon and Abramowitz, 2006 and Storch et al., 2007) as well as patient-rated comorbid anxious and depressive symptomatology (e.g., Storch et al., 2008). More recently, Ollendick, Öst, Reuterskiöld, & Costa (2010) investigated the impact of comorbidity on a one-session specific phobia treatment as well as the impact of the treatment on comorbid disorders. Ollendick and colleagues found that having comorbid anxiety disorders did not negatively impact treatment outcomes for specific phobias. Additionally, the clinical severity of comorbid anxiety disorders decreased following the treatment for specific phobias. This research provides some initial evidence that intensive treatments for a specific anxiety disorder may affect comorbid anxiety disorder diagnoses as well. Despite this information, little is currently known about the manner in which intensive treatments for anxiety disorders in youth impact comorbid diagnoses, given that the majority of the existing data come from small trials or single-case designs. The present study examines adolescents who completed an intensive 8-day treatment for panic disorder with agoraphobia (PDA) as part of a randomized controlled trial (Pincus, Whitton, et al., 2010). In addition to improvements in PDA, we hypothesized that both the frequency and severity of comorbid diagnoses would decrease in adolescents who received an 8-day treatment for PDA as compared to wait-list controls. Additionally, we hypothesized that the number and severity of comorbid diagnoses (aggregated as well as specific diagnoses) would also decrease from pre- to posttreatment.