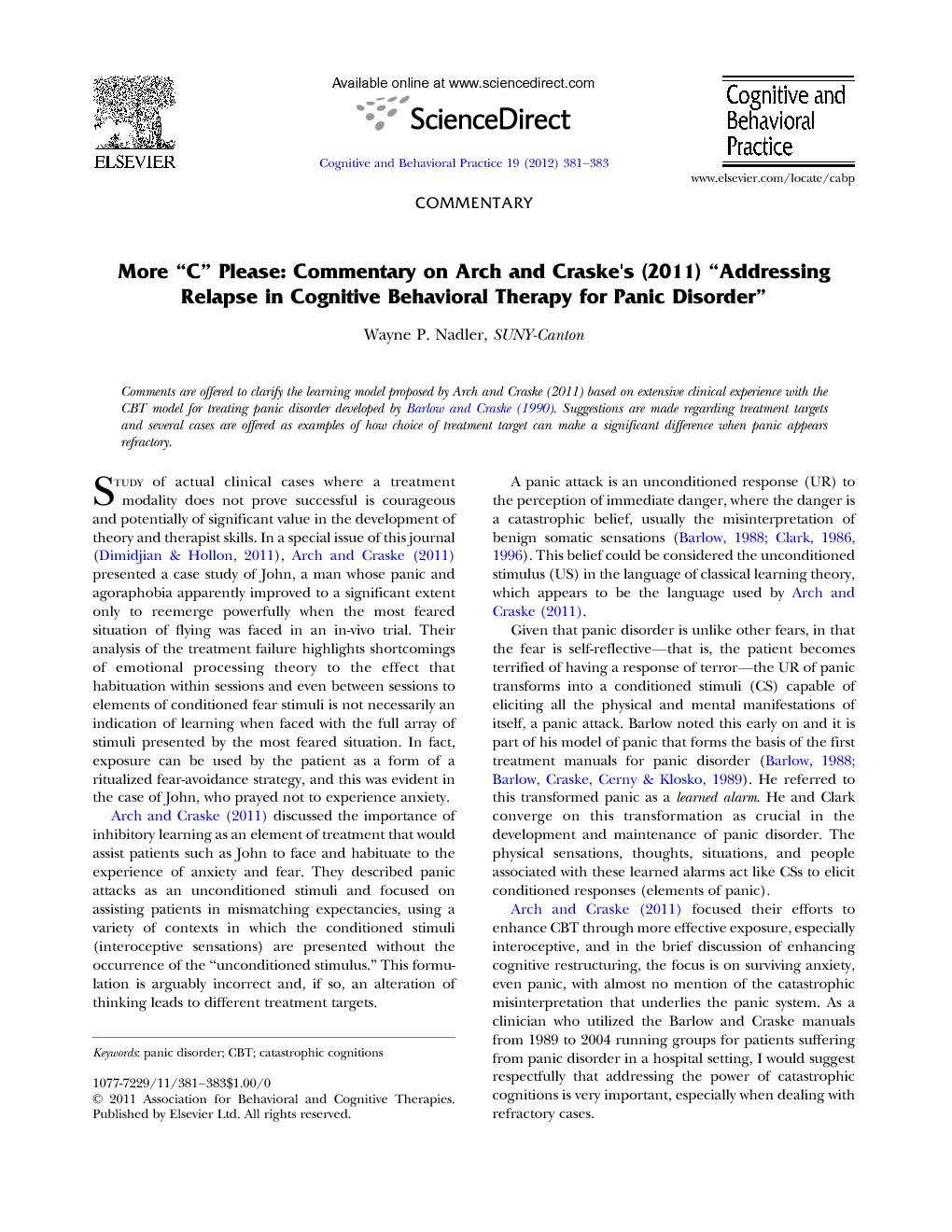 Comments are offered to clarify the learning model proposed by Arch and Craske (2011) based on extensive clinical experience with the CBT model for treating panic disorder developed by Barlow and Craske (1990). Suggestions are made regarding treatment targets and several cases are offered as examples of how choice of treatment target can make a significant difference when panic appears refractory.

Study of actual clinical cases where a treatment modality does not prove successful is courageous and potentially of significant value in the development of theory and therapist skills. In a special issue of this journal (Dimidjian & Hollon, 2011), Arch and Craske (2011) presented a case study of John, a man whose panic and agoraphobia apparently improved to a significant extent only to reemerge powerfully when the most feared situation of flying was faced in an in-vivo trial. Their analysis of the treatment failure highlights shortcomings of emotional processing theory to the effect that habituation within sessions and even between sessions to elements of conditioned fear stimuli is not necessarily an indication of learning when faced with the full array of stimuli presented by the most feared situation. In fact, exposure can be used by the patient as a form of a ritualized fear-avoidance strategy, and this was evident in the case of John, who prayed not to experience anxiety. Arch and Craske (2011) discussed the importance of inhibitory learning as an element of treatment that would assist patients such as John to face and habituate to the experience of anxiety and fear. They described panic attacks as an unconditioned stimuli and focused on assisting patients in mismatching expectancies, using a variety of contexts in which the conditioned stimuli (interoceptive sensations) are presented without the occurrence of the “unconditioned stimulus.” This formulation is arguably incorrect and, if so, an alteration of thinking leads to different treatment targets. A panic attack is an unconditioned response (UR) to the perception of immediate danger, where the danger is a catastrophic belief, usually the misinterpretation of benign somatic sensations (Barlow, 1988, Clark, 1986 and Clark, 1996). This belief could be considered the unconditioned stimulus (US) in the language of classical learning theory, which appears to be the language used by Arch and Craske (2011). Given that panic disorder is unlike other fears, in that the fear is self-reflective—that is, the patient becomes terrified of having a response of terror—the UR of panic transforms into a conditioned stimuli (CS) capable of eliciting all the physical and mental manifestations of itself, a panic attack. Barlow noted this early on and it is part of his model of panic that forms the basis of the first treatment manuals for panic disorder (Barlow, 1988 and Barlow et al., 1989). He referred to this transformed panic as a learned alarm. He and Clark converge on this transformation as crucial in the development and maintenance of panic disorder. The physical sensations, thoughts, situations, and people associated with these learned alarms act like CSs to elicit conditioned responses (elements of panic). Arch and Craske (2011) focused their efforts to enhance CBT through more effective exposure, especially interoceptive, and in the brief discussion of enhancing cognitive restructuring, the focus is on surviving anxiety, even panic, with almost no mention of the catastrophic misinterpretation that underlies the panic system. As a clinician who utilized the Barlow and Craske manuals from 1989 to 2004 running groups for patients suffering from panic disorder in a hospital setting, I would suggest respectfully that addressing the power of catastrophic cognitions is very important, especially when dealing with refractory cases.

The CBT model developed by Barlow (1988) and then elaborated by Craske (1999) is powerful and ultimately very effective overall for patients suffering from panic disorder (cf. Barlow, 2004, Brown and Barlow, 1995 and Gould et al., 1995). Along the way, though, the cognitive component seems have become more of an afterthought and this weakens the treatment model. The cognitive changes that occur with full exposure to the catastrophic belief (US) appear to be crucial in leading to change in some patients. As another example, simply upon learning that the physical symptoms of difficulty breathing, dizziness, numbness, and tingling could be produced by hyperventilation, a male patient in his 30s literally stopped panicking after searching for answers for 4 years. He had believed that he was going to die from a heart attack and that all of the specialists he saw were somehow wrong in concluding that his cardiac functioning was healthy. Interoceptive exposure to hyperventilation led to a shift in his beliefs as to the meaning of the sensations. He was still free of panic problems when I met him in public 10 years later.