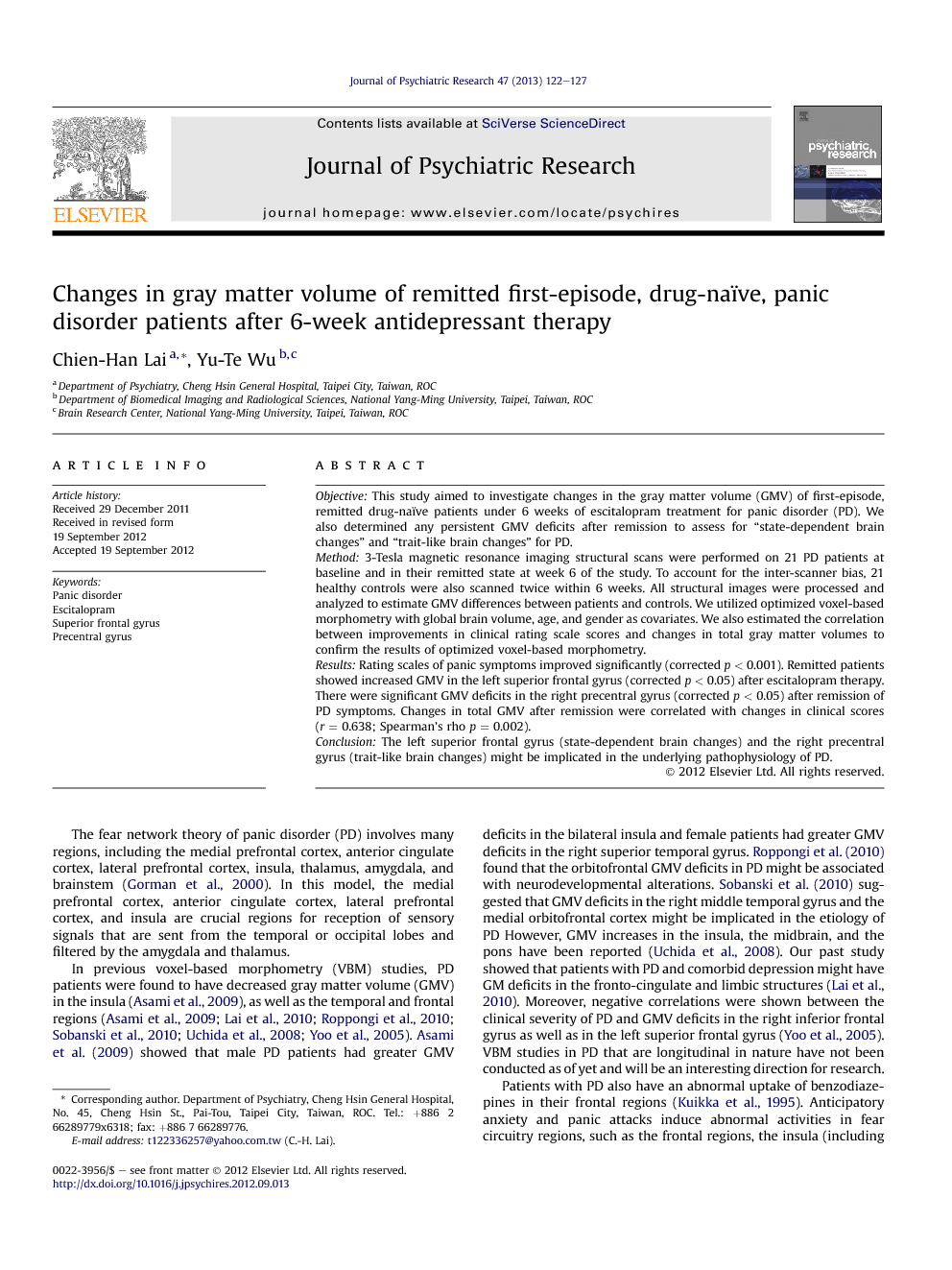 Objective This study aimed to investigate changes in the gray matter volume (GMV) of first-episode, remitted drug-naïve patients under 6 weeks of escitalopram treatment for panic disorder (PD). We also determined any persistent GMV deficits after remission to assess for “state-dependent brain changes” and “trait-like brain changes” for PD. Method 3-Tesla magnetic resonance imaging structural scans were performed on 21 PD patients at baseline and in their remitted state at week 6 of the study. To account for the inter-scanner bias, 21 healthy controls were also scanned twice within 6 weeks. All structural images were processed and analyzed to estimate GMV differences between patients and controls. We utilized optimized voxel-based morphometry with global brain volume, age, and gender as covariates. We also estimated the correlation between improvements in clinical rating scale scores and changes in total gray matter volumes to confirm the results of optimized voxel-based morphometry. Results Rating scales of panic symptoms improved significantly (corrected p < 0.001). Remitted patients showed increased GMV in the left superior frontal gyrus (corrected p < 0.05) after escitalopram therapy. There were significant GMV deficits in the right precentral gyrus (corrected p < 0.05) after remission of PD symptoms. Changes in total GMV after remission were correlated with changes in clinical scores (r = 0.638; Spearman's rho p = 0.002). Conclusion The left superior frontal gyrus (state-dependent brain changes) and the right precentral gyrus (trait-like brain changes) might be implicated in the underlying pathophysiology of PD.

The fear network theory of panic disorder (PD) involves many regions, including the medial prefrontal cortex, anterior cingulate cortex, lateral prefrontal cortex, insula, thalamus, amygdala, and brainstem (Gorman et al., 2000). In this model, the medial prefrontal cortex, anterior cingulate cortex, lateral prefrontal cortex, and insula are crucial regions for reception of sensory signals that are sent from the temporal or occipital lobes and filtered by the amygdala and thalamus. In previous voxel-based morphometry (VBM) studies, PD patients were found to have decreased gray matter volume (GMV) in the insula (Asami et al., 2009), as well as the temporal and frontal regions (Asami et al., 2009; Lai et al., 2010; Roppongi et al., 2010; Sobanski et al., 2010; Uchida et al., 2008; Yoo et al., 2005). Asami et al. (2009) showed that male PD patients had greater GMV deficits in the bilateral insula and female patients had greater GMV deficits in the right superior temporal gyrus. Roppongi et al. (2010) found that the orbitofrontal GMV deficits in PD might be associated with neurodevelopmental alterations. Sobanski et al. (2010) suggested that GMV deficits in the right middle temporal gyrus and the medial orbitofrontal cortex might be implicated in the etiology of PD However, GMV increases in the insula, the midbrain, and the pons have been reported (Uchida et al., 2008). Our past study showed that patients with PD and comorbid depression might have GM deficits in the fronto-cingulate and limbic structures (Lai et al., 2010). Moreover, negative correlations were shown between the clinical severity of PD and GMV deficits in the right inferior frontal gyrus as well as in the left superior frontal gyrus (Yoo et al., 2005). VBM studies in PD that are longitudinal in nature have not been conducted as of yet and will be an interesting direction for research. Patients with PD also have an abnormal uptake of benzodiazepines in their frontal regions (Kuikka et al., 1995). Anticipatory anxiety and panic attacks induce abnormal activities in fear circuitry regions, such as the frontal regions, the insula (including the precentral gyrus), the superior temporal lobe, and the limbic system (Boshuisen et al., 2002). Self-induced anxiety can induce abnormal brain activities in the superior frontal cortex, the medial frontal cortex, and the inferior frontal cortex (Kimbrell et al., 1999). The frontal regions and the insula are also important for control of the autonomic nervous function. The medial prefrontal cortex, the anterior cingulate cortex, and the lateral prefrontal cortex are related to top-down regulation. The insula is also associated with autonomic arousal (Kuniecki et al., 2003; Liao et al., 2010). Reduced gamma-aminobutyric acid binding pattern in the insula and the frontal system of PD patients can contribute to top-down dysregulation (Cameron et al., 2007; Malizia et al., 1998). The major functions of the insula include the receiving and processing of sensory information, such as visceral stimuli or other sensory stimuli. The insula also connects with other fear circuitry regions for the modulation of fear responses and PD symptoms (Nagai et al., 2007). Thus, the insula of patients with PD might detect and overestimate the interoceptive stimuli, which might provoke PD symptoms (Graeff and Del-Ben, 2008). In summary, the frontal and insula might represent the most important regions for etiology of PD. The neuroanatomical hypothesis of PD suggests that the deficiency in serotonin is related to panic attacks. Acute tryptophan depletion causes lower serotonin levels, which impairs the performance of cognitive function and causes attenuated activations of frontal lobe in cognitive tasks (Allen et al., 2006). Antidepressants (e.g., serotonergic agents) can treat PD symptoms through modification of the serotonin system and proliferation of astrocytes in the frontal regions after chronic administration (Kodama et al., 2004). Antidepressants have been reported to modulate glucose metabolism in the frontal, occipital, and limbic system (Smith et al., 2002). Our previous VBM report also showed that antidepressant treatment would lead to a subtle increase in GMV in the frontal regions of remitted patients with comorbid depression and PD (Lai and Hsu, 2011). These studies help us understand the effects of antidepressants on the brain structure of individuals suffering from PD. In this study, we planned to study the changes in GMV in first-episode, drug-naïve patients with PD that remits after being treated for 6 weeks with escitalopram (S-enantiomer of citalopram; Leonard and Taylor, 2010). The 6-week interval was chosen as a result of findings from previous reports that showed significant changes in GMV after 6 weeks of antidepressant treatment (Lai and Hsu, 2011; Li et al., 2010; Sijens et al., 2008). According to the above literature, we hypothesized that first-episode, drug-naïve patients with PD would show GMV increases in the insula or the frontal regions (e.g., inferior frontal cortex, medial prefrontal cortex or anterior cingulate cortex) after remission of PD symptoms, which could be identified as “state-dependent brain changes”. However, these patients might still have residual GMV deficits even after remission, which could be recognized as “trait-like brain changes”. We utilized the optimized VBM method to estimate the differences in GMV between patients and controls at baseline and at the 6th week to identify “state-dependent brain changes” and “trait-like brain changes” associated with escitalopram treatment for PD.

In this study, we demonstrated significant differences in the GMV of the insula and the precentral gyrus in previously untreated PD patients. We further detected that some of this changes persisted after treatment with escitalopram. Moreover, additional GMV changes occurred within the fronto-polar area.