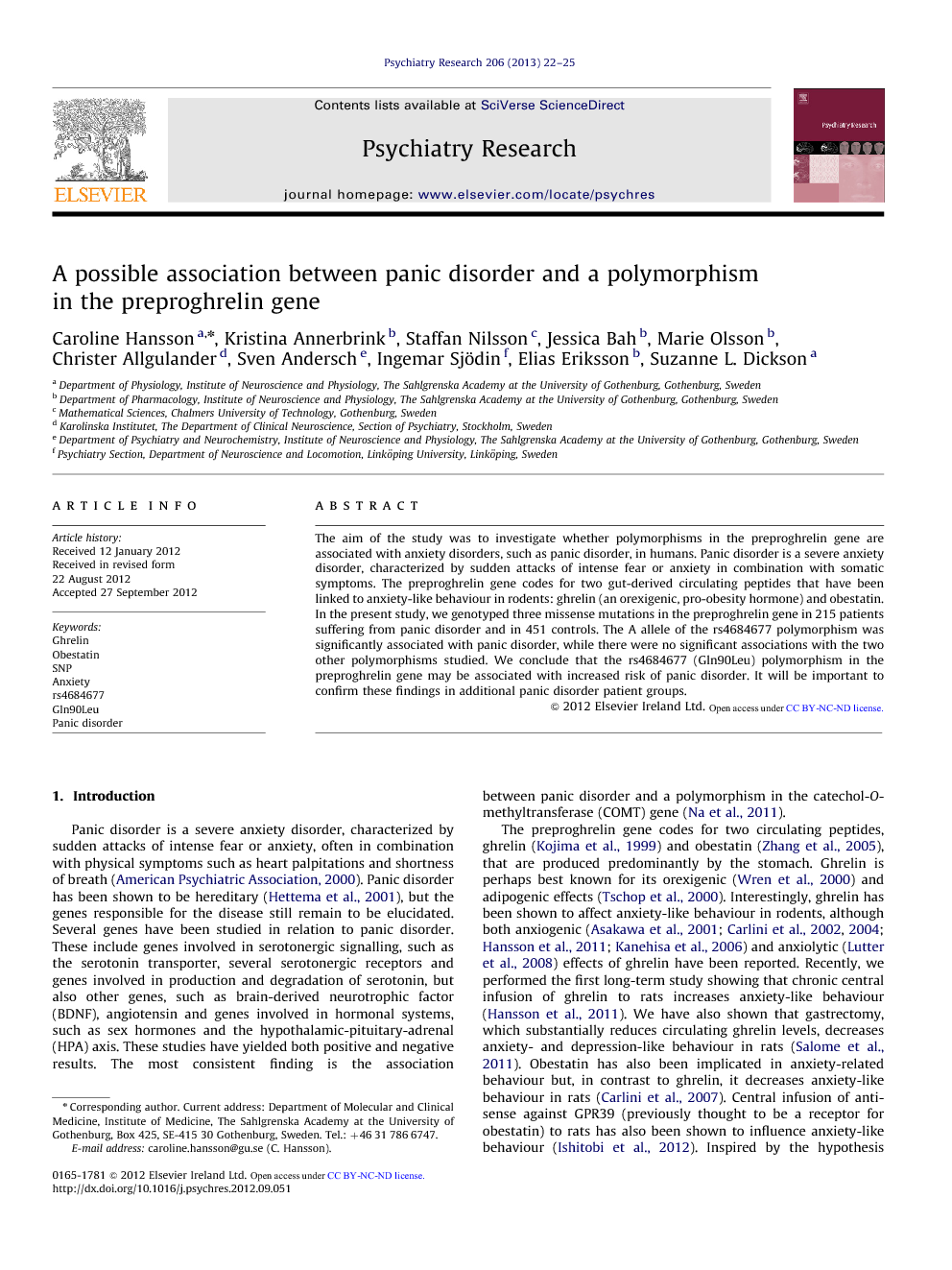 Panic disorder is a severe anxiety disorder, characterized by sudden attacks of intense fear or anxiety, often in combination with physical symptoms such as heart palpitations and shortness of breath (American Psychiatric Association, 2000). Panic disorder has been shown to be hereditary (Hettema et al., 2001), but the genes responsible for the disease still remain to be elucidated. Several genes have been studied in relation to panic disorder. These include genes involved in serotonergic signalling, such as the serotonin transporter, several serotonergic receptors and genes involved in production and degradation of serotonin, but also other genes, such as brain-derived neurotrophic factor (BDNF), angiotensin and genes involved in hormonal systems, such as sex hormones and the hypothalamic-pituitary-adrenal (HPA) axis. These studies have yielded both positive and negative results. The most consistent finding is the association between panic disorder and a polymorphism in the catechol-O-methyltransferase (COMT) gene ( Na et al., 2011). The preproghrelin gene codes for two circulating peptides, ghrelin (Kojima et al., 1999) and obestatin (Zhang et al., 2005), that are produced predominantly by the stomach. Ghrelin is perhaps best known for its orexigenic (Wren et al., 2000) and adipogenic effects (Tschop et al., 2000). Interestingly, ghrelin has been shown to affect anxiety-like behaviour in rodents, although both anxiogenic (Asakawa et al., 2001, Carlini et al., 2002, Carlini et al., 2004, Hansson et al., 2011 and Kanehisa et al., 2006) and anxiolytic (Lutter et al., 2008) effects of ghrelin have been reported. Recently, we performed the first long-term study showing that chronic central infusion of ghrelin to rats increases anxiety-like behaviour (Hansson et al., 2011). We have also shown that gastrectomy, which substantially reduces circulating ghrelin levels, decreases anxiety- and depression-like behaviour in rats (Salome et al., 2011). Obestatin has also been implicated in anxiety-related behaviour but, in contrast to ghrelin, it decreases anxiety-like behaviour in rats (Carlini et al., 2007). Central infusion of antisense against GPR39 (previously thought to be a receptor for obestatin) to rats has also been shown to influence anxiety-like behaviour (Ishitobi et al., 2012). Inspired by the hypothesis emerging from these animal studies, that peptides derived from the preproghrelin gene may have a role in anxiety behaviour, we have begun to explore the clinical relevance of these findings. Here we sought to determine whether there is an association between panic disorder and polymorphisms in the preproghrelin gene in a Swedish population.