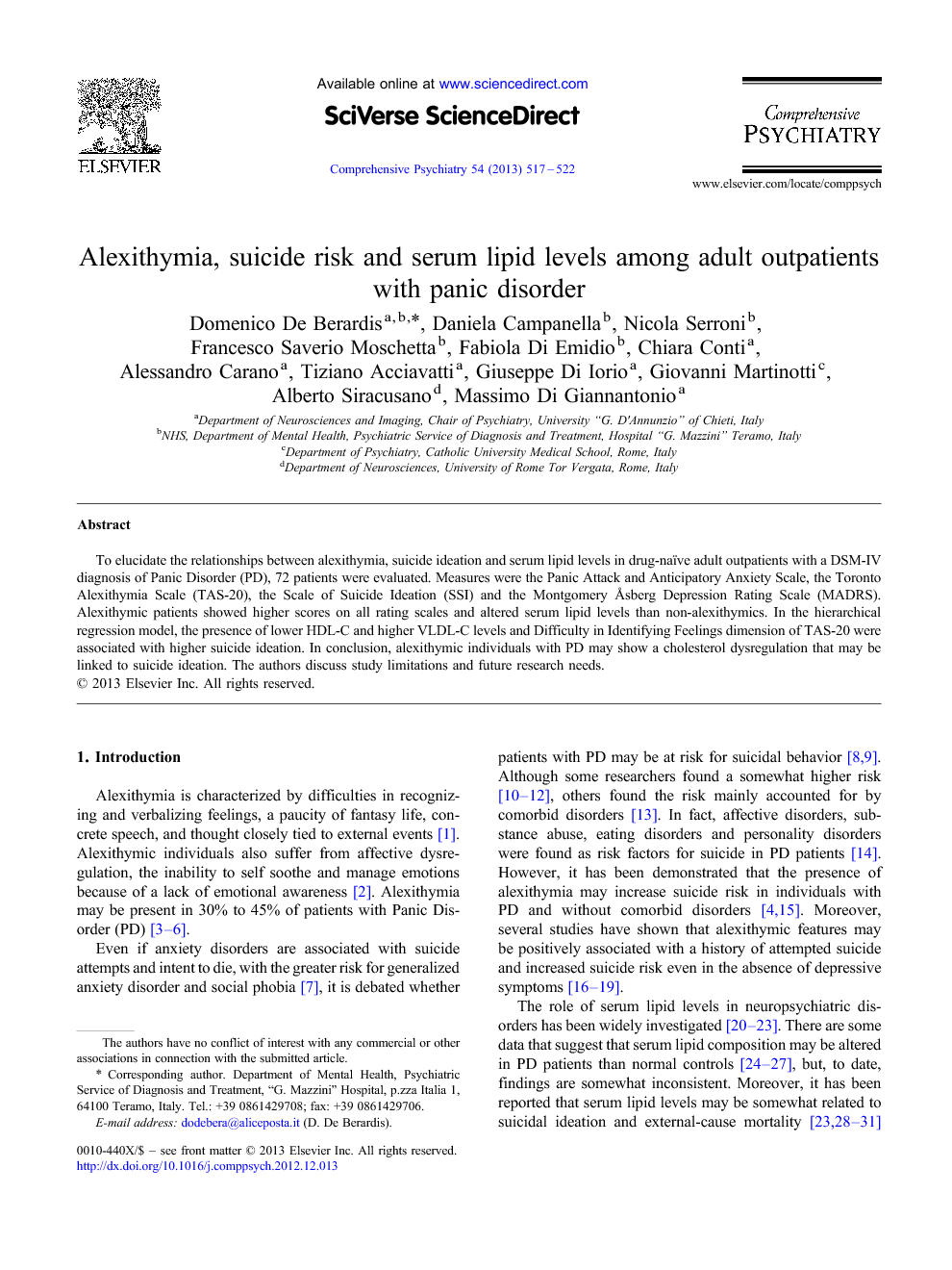 To elucidate the relationships between alexithymia, suicide ideation and serum lipid levels in drug-naïve adult outpatients with a DSM-IV diagnosis of Panic Disorder (PD), 72 patients were evaluated. Measures were the Panic Attack and Anticipatory Anxiety Scale, the Toronto Alexithymia Scale (TAS-20), the Scale of Suicide Ideation (SSI) and the Montgomery Åsberg Depression Rating Scale (MADRS). Alexithymic patients showed higher scores on all rating scales and altered serum lipid levels than non-alexithymics. In the hierarchical regression model, the presence of lower HDL-C and higher VLDL-C levels and Difficulty in Identifying Feelings dimension of TAS-20 were associated with higher suicide ideation. In conclusion, alexithymic individuals with PD may show a cholesterol dysregulation that may be linked to suicide ideation. The authors discuss study limitations and future research needs.

Alexithymia is characterized by difficulties in recognizing and verbalizing feelings, a paucity of fantasy life, concrete speech, and thought closely tied to external events [1]. Alexithymic individuals also suffer from affective dysregulation, the inability to self soothe and manage emotions because of a lack of emotional awareness [2]. Alexithymia may be present in 30% to 45% of patients with Panic Disorder (PD) [3], [4], [5] and [6]. Even if anxiety disorders are associated with suicide attempts and intent to die, with the greater risk for generalized anxiety disorder and social phobia [7], it is debated whether patients with PD may be at risk for suicidal behavior [8] and [9]. Although some researchers found a somewhat higher risk [10], [11] and [12], others found the risk mainly accounted for by comorbid disorders [13]. In fact, affective disorders, substance abuse, eating disorders and personality disorders were found as risk factors for suicide in PD patients [14]. However, it has been demonstrated that the presence of alexithymia may increase suicide risk in individuals with PD and without comorbid disorders [4] and [15]. Moreover, several studies have shown that alexithymic features may be positively associated with a history of attempted suicide and increased suicide risk even in the absence of depressive symptoms [16], [17], [18] and [19]. The role of serum lipid levels in neuropsychiatric disorders has been widely investigated [20], [21], [22] and [23]. There are some data that suggest that serum lipid composition may be altered in PD patients than normal controls [24], [25], [26] and [27], but, to date, findings are somewhat inconsistent. Moreover, it has been reported that serum lipid levels may be somewhat related to suicidal ideation and external-cause mortality [23], [28], [29], [30] and [31] and this may be particularly true for low serum cholesterol levels [32]. However, to date, the interrelationships between alexithymia, suicide ideation and serum lipid profile in PD patients have not yet been studied. Moreover, evaluating PD patients with a relatively long history of illness may lead to potential biases because of current or previous pharmacological or psychotherapeutic treatments that may, on their own, influence alexithymia and serum lipid levels. Therefore, in the present exploratory study, we evaluated only drug naïve patients with PD at first treatment search. Specifically, the aims of this study were to: 1) evaluate possible clinical and laboratory differences between patients positive or not for alexithymia, and 2) investigate which clinical and laboratory variables were associated with suicide ideation using a blockwise linear regression analysis.