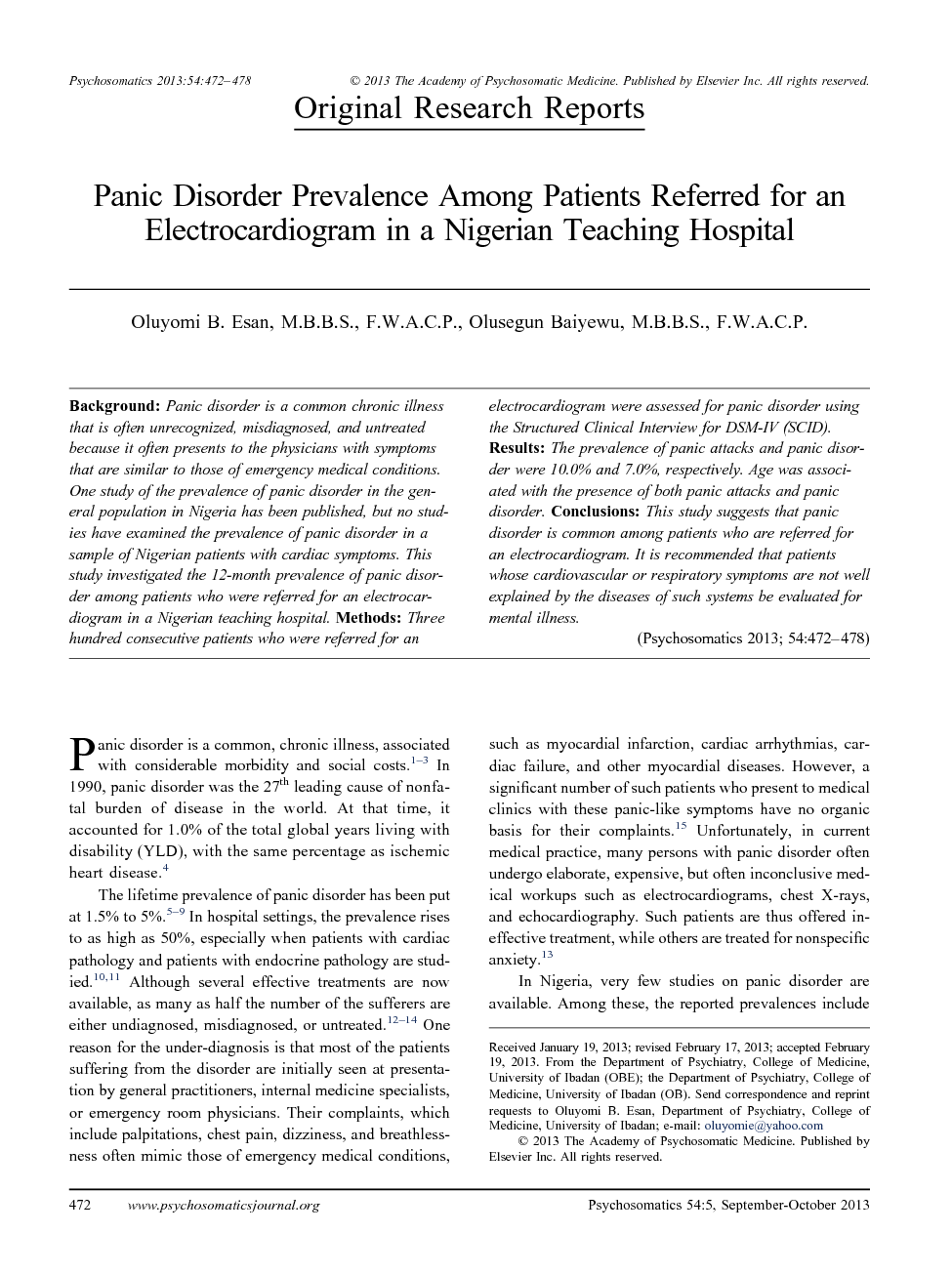 Panic disorder is a common, chronic illness, associated with considerable morbidity and social costs.1, 2 and 3 In 1990, panic disorder was the 27th leading cause of nonfatal burden of disease in the world. At that time, it accounted for 1.0% of the total global years living with disability (YLD), with the same percentage as ischemic heart disease.4 The lifetime prevalence of panic disorder has been put at 1.5% to 5%.5, 6, 7, 8 and 9 In hospital settings, the prevalence rises to as high as 50%, especially when patients with cardiac pathology and patients with endocrine pathology are studied.10 and 11 Although several effective treatments are now available, as many as half the number of the sufferers are either undiagnosed, misdiagnosed, or untreated.12, 13 and 14 One reason for the under-diagnosis is that most of the patients suffering from the disorder are initially seen at presentation by general practitioners, internal medicine specialists, or emergency room physicians. Their complaints, which include palpitations, chest pain, dizziness, and breathlessness often mimic those of emergency medical conditions, such as myocardial infarction, cardiac arrhythmias, cardiac failure, and other myocardial diseases. However, a significant number of such patients who present to medical clinics with these panic-like symptoms have no organic basis for their complaints.15 Unfortunately, in current medical practice, many persons with panic disorder often undergo elaborate, expensive, but often inconclusive medical workups such as electrocardiograms, chest X-rays, and echocardiography. Such patients are thus offered ineffective treatment, while others are treated for nonspecific anxiety.13 In Nigeria, very few studies on panic disorder are available. Among these, the reported prevalences include 3% in a psychiatric outpatient clinic of a teaching hospital,16 and lifetime and 12-month prevalences of 0.2% and 0.1% in the community.17 There is no study in Nigeria that has addressed patients who are at a high risk for panic disorder, such as patients referred for cardiac or respiratory investigation. Such studies are particularly important since reports from Europe and the United States show that the prevalence of panic disorder is high among such patients.10, 12, 18 and 19 Improving the recognition and treatment of panic disorder either alone or as a comorbid illness in Nigeria could reduce the burden, social costs, and economic costs attributable to under-diagnosis, misdiagnosis, and under-treatment of this condition.2 and 20 The aim of the present study was to estimate the prevalence of panic disorder among patients that have been referred for an electrocardiogram and the sociodemographic factors associated with such patients in a Nigerian teaching hospital.