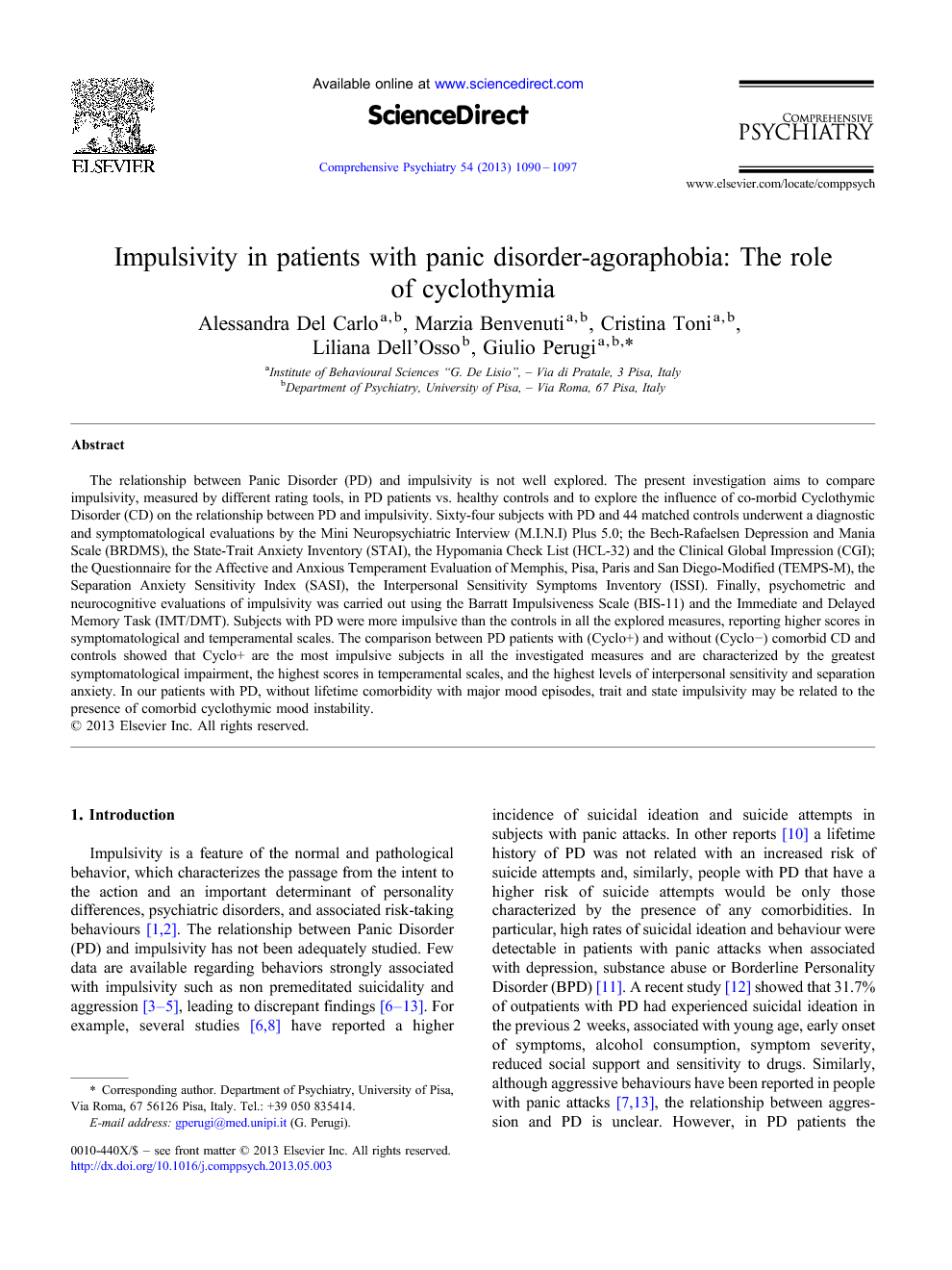 The relationship between Panic Disorder (PD) and impulsivity is not well explored. The present investigation aims to compare impulsivity, measured by different rating tools, in PD patients vs. healthy controls and to explore the influence of co-morbid Cyclothymic Disorder (CD) on the relationship between PD and impulsivity. Sixty-four subjects with PD and 44 matched controls underwent a diagnostic and symptomatological evaluations by the Mini Neuropsychiatric Interview (M.I.N.I) Plus 5.0; the Bech-Rafaelsen Depression and Mania Scale (BRDMS), the State-Trait Anxiety Inventory (STAI), the Hypomania Check List (HCL-32) and the Clinical Global Impression (CGI); the Questionnaire for the Affective and Anxious Temperament Evaluation of Memphis, Pisa, Paris and San Diego-Modified (TEMPS-M), the Separation Anxiety Sensitivity Index (SASI), the Interpersonal Sensitivity Symptoms Inventory (ISSI). Finally, psychometric and neurocognitive evaluations of impulsivity was carried out using the Barratt Impulsiveness Scale (BIS-11) and the Immediate and Delayed Memory Task (IMT/DMT). Subjects with PD were more impulsive than the controls in all the explored measures, reporting higher scores in symptomatological and temperamental scales. The comparison between PD patients with (Cyclo+) and without (Cyclo−) comorbid CD and controls showed that Cyclo+ are the most impulsive subjects in all the investigated measures and are characterized by the greatest symptomatological impairment, the highest scores in temperamental scales, and the highest levels of interpersonal sensitivity and separation anxiety. In our patients with PD, without lifetime comorbidity with major mood episodes, trait and state impulsivity may be related to the presence of comorbid cyclothymic mood instability.

Impulsivity is a feature of the normal and pathological behavior, which characterizes the passage from the intent to the action and an important determinant of personality differences, psychiatric disorders, and associated risk-taking behaviours [1] and [2]. The relationship between Panic Disorder (PD) and impulsivity has not been adequately studied. Few data are available regarding behaviors strongly associated with impulsivity such as non premeditated suicidality and aggression [3], [4] and [5], leading to discrepant findings [6], [7], [8], [9], [10], [11], [12] and [13]. For example, several studies [6] and [8] have reported a higher incidence of suicidal ideation and suicide attempts in subjects with panic attacks. In other reports [10] a lifetime history of PD was not related with an increased risk of suicide attempts and, similarly, people with PD that have a higher risk of suicide attempts would be only those characterized by the presence of any comorbidities. In particular, high rates of suicidal ideation and behaviour were detectable in patients with panic attacks when associated with depression, substance abuse or Borderline Personality Disorder (BPD) [11]. A recent study [12] showed that 31.7% of outpatients with PD had experienced suicidal ideation in the previous 2 weeks, associated with young age, early onset of symptoms, alcohol consumption, symptom severity, reduced social support and sensitivity to drugs. Similarly, although aggressive behaviours have been reported in people with panic attacks [7] and [13], the relationship between aggression and PD is unclear. However, in PD patients the comorbidity with depression seems to increase the prevalence of property destruction and aggression, as well as homicidal ideation, other than suicidal ideation [7]. Increased trait and state impulsivity in Bipolar Disorder (BD) has been widely documented and reviewed [14], [15], [16] and [17]. Impulsivity is also considered a core characteristic of Bipolar Spectrum Disorders (BSDs) [18] and [19] and, as a trait, it has been classically included among hyperthymic and cyclotymic temperamental features [19] and [20]. The co-occurrence of BD and Cyclothymic Disorder (CD) with anxiety, impulsivity, impulse control and substance use disorders is also well established [18], [19], [21], [22], [23] and [24]. Interestingly, two recent study conducted by independent research groups [21] and [25] showed that BD patients with one or more comorbid anxiety disorder present higher levels of “trait” impulsivity, as measured by the BIS, in comparison to BD patients without such comorbidity. We recently evaluated impulsivity, by two different rating tools, in patients with primary anxiety disorders and control subjects [26] and [27]. In contrast with the idea that harm avoidance and behavioural inhibition are invariably associated with anxiety disorders, anxious patients resulted more impulsive than control subjects, in both psychometric and neurocognitive measures [26]. In particular impulsivity was highest in patients with comorbid CD [27]. Among the broad range of anxiety-related symptoms and disorders, patients with BD and CD can frequently report panic attacks and varying degrees of phobic avoidance, up to extended agoraphobia [28] and [29]. Panic attacks can be triggered by separation events or under the influence of certain substances such as stimulants or cannabis. In some cases panic attacks start during periods of hyperactivity or excitement and sometimes mark the switch from an elated to a depressive phase [30]. Although the relationship between PD and CD could be merely viewed as an association between two separate disorders, some data suggest that panic attacks and rapid mood switching could be described as a whole, in a particular subtype of familial bipolarity. MacKinnon et al. [31], [32] and [33] have carried out a series of clinical and family studies on bipolar subjects with rapid mood switches, whose characteristics in many ways resulted similar to those of cyclothymic patients. The presence of rapid mood fluctuations is associated with a high familial load for Mood and Anxiety Disorders (MDs, ADs), early onset, comorbidity with PD and substance use disorders, higher rate of violent behavior, suicidal behavior and non-suicidal self-harm. These findings are consistent with the results of the studies on the characteristics of BD in children and adolescents, pointing out high familial loading, comorbidity with multiple ADs and rapid circadian switches [34]. Comorbidity with PD and rapid switches seems to define a particular familial subtype of BD characterized by early onset and cyclothymic instability and perhaps impulsivity [33] and [34]. To our knowledge no studies have specifically focused on impulsivity and PD. We therefore concentrated on this topic wishing moreover to better delineate the nature of the clinical interface between PD, CD and impulsivity. In the first part of the study our aim is to evaluate and compare impulsivity using different assessment tools (rating-scale and neurocognitive test) in patients with PD and control subjects. In a second step we explore the influence of co-morbid CD on the relationship between PD and impulsivity. We hypothesize that impulsivity, as measured by different tools, might not be directly related to the presence of the PD in itself, but to the frequent co-occurrence of cyclothymic mood instability.