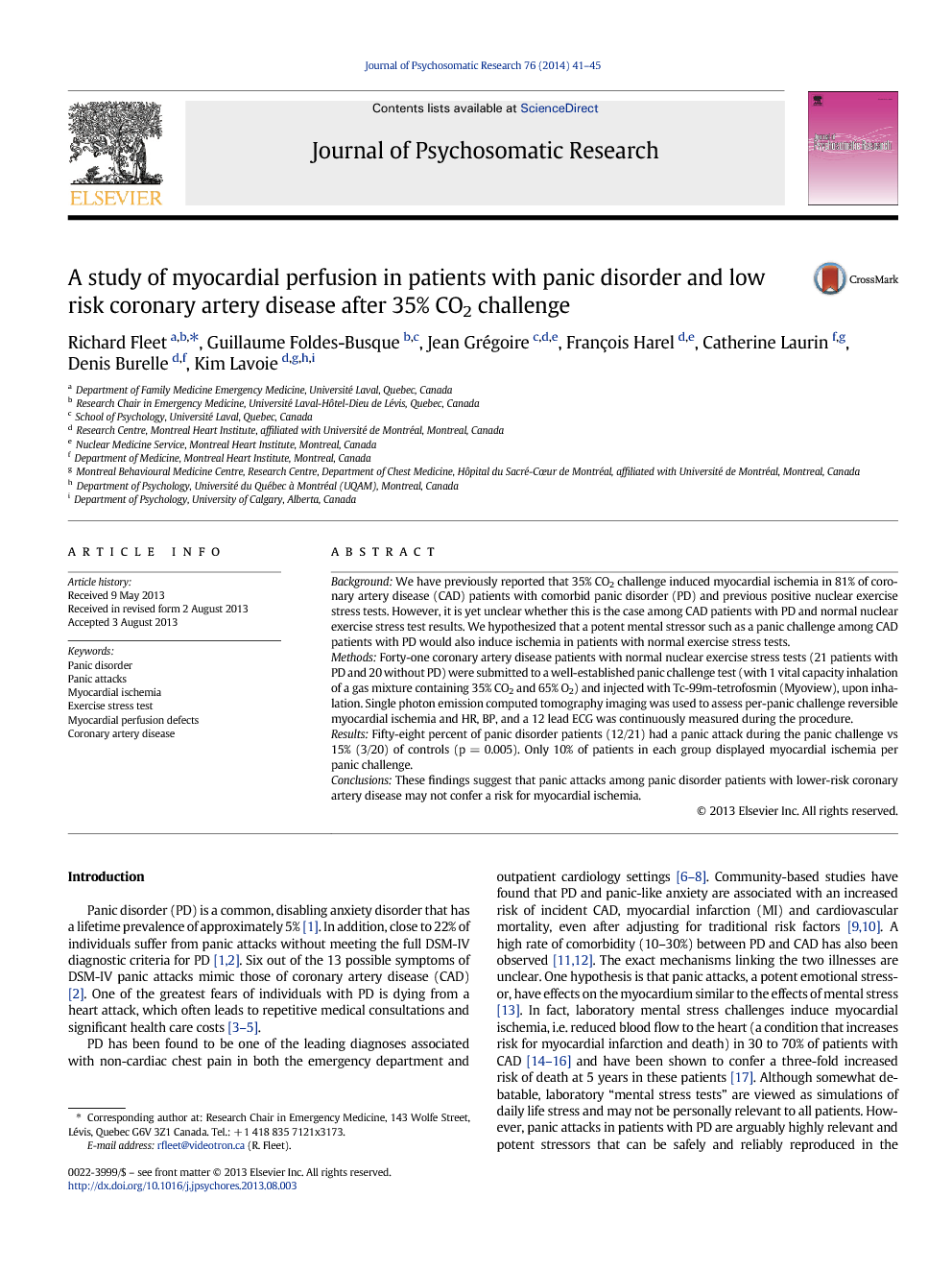 Panic disorder (PD) is a common, disabling anxiety disorder that has a lifetime prevalence of approximately 5% [1]. In addition, close to 22% of individuals suffer from panic attacks without meeting the full DSM-IV diagnostic criteria for PD [1] and [2]. Six out of the 13 possible symptoms of DSM-IV panic attacks mimic those of coronary artery disease (CAD) [2]. One of the greatest fears of individuals with PD is dying from a heart attack, which often leads to repetitive medical consultations and significant health care costs [3], [4] and [5]. PD has been found to be one of the leading diagnoses associated with non-cardiac chest pain in both the emergency department and outpatient cardiology settings [6], [7] and [8]. Community-based studies have found that PD and panic-like anxiety are associated with an increased risk of incident CAD, myocardial infarction (MI) and cardiovascular mortality, even after adjusting for traditional risk factors [9] and [10]. A high rate of comorbidity (10–30%) between PD and CAD has also been observed [11] and [12]. The exact mechanisms linking the two illnesses are unclear. One hypothesis is that panic attacks, a potent emotional stressor, have effects on the myocardium similar to the effects of mental stress [13]. In fact, laboratory mental stress challenges induce myocardial ischemia, i.e. reduced blood flow to the heart (a condition that increases risk for myocardial infarction and death) in 30 to 70% of patients with CAD [14], [15] and [16] and have been shown to confer a three-fold increased risk of death at 5 years in these patients [17]. Although somewhat debatable, laboratory “mental stress tests” are viewed as simulations of daily life stress and may not be personally relevant to all patients. However, panic attacks in patients with PD are arguably highly relevant and potent stressors that can be safely and reliably reproduced in the laboratory [18], [19], [20] and [21]. This offers the possibility to study their impact on myocardial ischemia. We have previously reported that panic attacks induced in the laboratory through inhalation of a mixture of 35% CO2 and 65% O2 are associated with myocardial ischemia, as measured using single photon emission computed tomography (SPECT), in 80% of patients with established PD and CAD [11]. However, this previous study exclusively focused on CAD patients with recent exercise-inducible ischemia, who may be considered “high risk”. As such, the association between panic attacks and myocardial ischemia in more “low-risk” PD/CAD patients remains unexplored. The current study sought to determine the association between induced panic attacks and myocardial ischemia in patients with comorbid PD and CAD as well as recent normal exercise stress tests. Determining the answer to this question is vital for the provision of accurate prognostic information to patients with comorbid PD and CAD, particularly in light of recent population-based studies associating PD with increased risk of MI and mortality [9] and [10]. It was hypothesized that a greater proportion of CAD patients with PD would display reversible myocardial perfusion defects in response to the challenge, compared to CAD patients without PD. Methods The internal ethics and review board of the Montreal Heart Institute approved this project. Informed consent was obtained from all patients and their cardiologists. Recruitment procedure Consecutive patients aged 18 to 70 years who were referred for exercise SPECT imaging were recruited to complete an initial sociodemographic and medical history interview on the day of their exercise stress test. This was followed by a brief psychiatric screening interview (Primary Care Evaluation of Mental Disorders, PRIME-MD) [22] for probable PD and the Anxiety Sensitivity Index (ASI) [23] and [24] and the Beck Depression Inventory-II (BDI-II) [25] and [26]. CAD was defined as having a documented history of either MI, Percutaneous Coronary Intervention (PCI), Coronary Artery Bypass Graft surgery (CABG), or a past angiogram indicating at least a 50% stenosis in 1 or more major coronary arteries. To be eligible for further participation, patients had to have demonstrated an absence of reversible myocardial perfusion defects on their exercise SPECT. Patients who had recently (< 2 months) had an MI or major cardiac event/procedure (e.g., CABG, PCI) or who had a diagnosis of congestive heart failure, unstable angina, serious arrhythmias, acute or chronic pulmonary disease, history of stroke, history of substance abuse disorder, or cognitive/neurological deficits, were excluded from further participation. All potentially eligible patients were then contacted by a graduate student in clinical psychology who conducted the Anxiety Disorders Interview Schedule for DSM-IV (ADIS-IV) [27] and [28] to confirm eligibility for the control or the panic group. Graduate students received one day training in the ADIS-IV administration. Interviews were supervised and every potential study subject's evaluation was reviewed by senior clinical psychologists (RF and KL). Patients meeting criteria for primary PD and those with no current or lifetime history for any psychiatric disorder (including panic attacks), with no current or recent (< 1 month) daily use of psychotropic medications, were invited to take part in the panic challenge procedure. Consenting patients were scheduled for a laboratory panic challenge within 1 month of their exercise SPECT investigation. Over a 12-month period, a total of 1897 patients were referred for exercise stress SPECT imaging, of which 1675 (88%) consented to participate in the screening interview. Patients with probable PD and those patients without a current or lifetime history of a psychiatric disorder who met all other eligibility criteria (n = 172) were contacted by phone to undergo the structured psychiatric interview to verify psychiatric status (i.e., PD diagnosis or no diagnosis). A total of 154 (90%) patients consented to undergo this interview. Eligible patients (n = 50) meeting diagnostic criteria for the primary PD (PD group) or with no current or lifetime history of a psychiatric disorder (control group) were invited to undergo the panic challenge procedure, and 41 (82%) accepted (21 with PD and 20 controls).

The CO2 challenge, a potent mental stressor in PD patients, was not associated with myocardial ischemia in the vast majority (90%) of patients with CAD and normal exercise stress tests. Although future studies on PD patients without CAD are required, and mental stress induced myocardial ischemia in this group is unlikely. To our knowledge, this is the first study to assess this association, and the results provide important clinical data that support a reassuring prognosis in low-risk (i.e., no recent exercise-induced ischemia) CAD patients with comorbid PD.