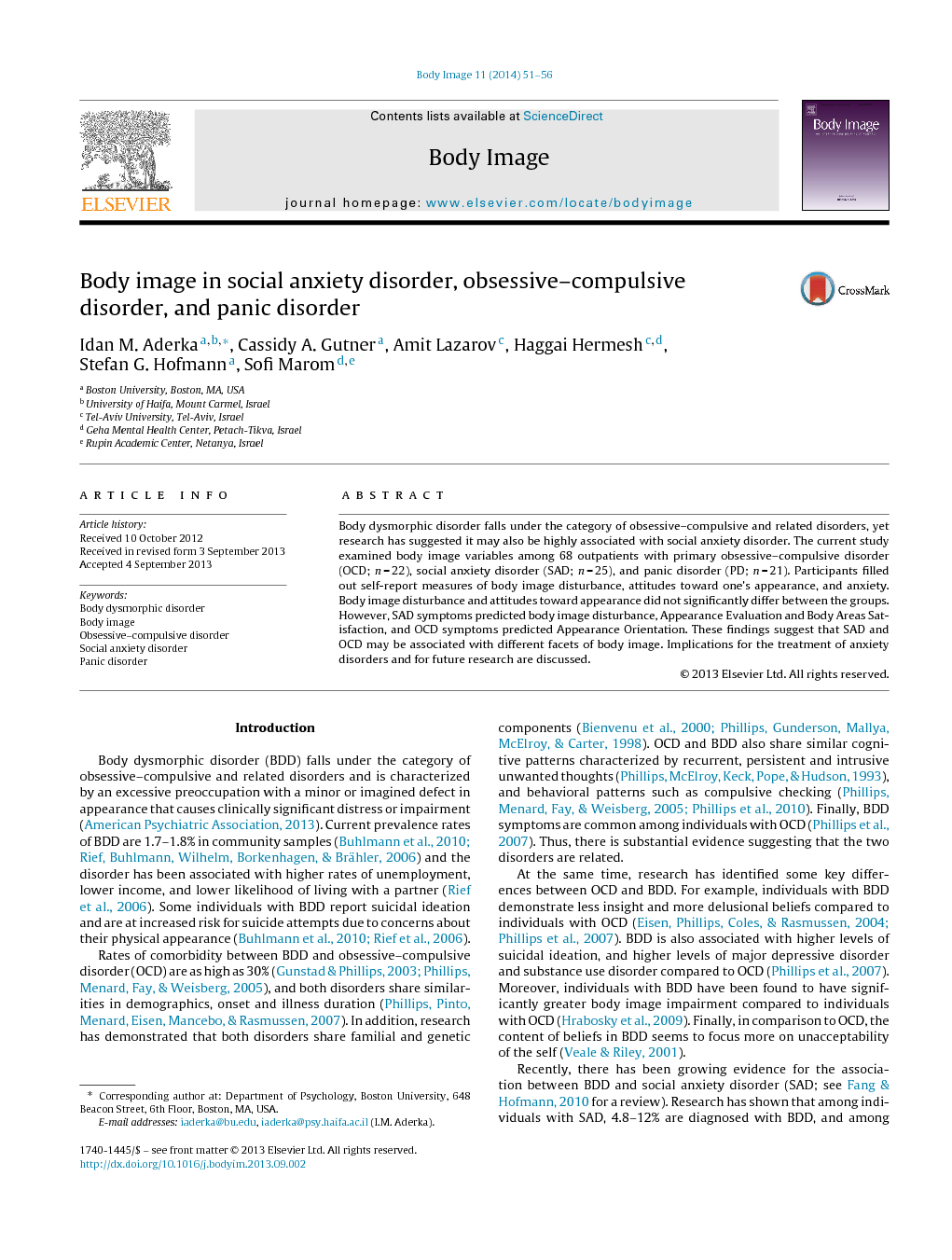 Body dysmorphic disorder falls under the category of obsessive–compulsive and related disorders, yet research has suggested it may also be highly associated with social anxiety disorder. The current study examined body image variables among 68 outpatients with primary obsessive–compulsive disorder (OCD; n = 22), social anxiety disorder (SAD; n = 25), and panic disorder (PD; n = 21). Participants filled out self-report measures of body image disturbance, attitudes toward one's appearance, and anxiety. Body image disturbance and attitudes toward appearance did not significantly differ between the groups. However, SAD symptoms predicted body image disturbance, Appearance Evaluation and Body Areas Satisfaction, and OCD symptoms predicted Appearance Orientation. These findings suggest that SAD and OCD may be associated with different facets of body image. Implications for the treatment of anxiety disorders and for future research are discussed.

Body dysmorphic disorder (BDD) falls under the category of obsessive–compulsive and related disorders and is characterized by an excessive preoccupation with a minor or imagined defect in appearance that causes clinically significant distress or impairment (American Psychiatric Association, 2013). Current prevalence rates of BDD are 1.7–1.8% in community samples (Buhlmann et al., 2010 and Rief et al., 2006) and the disorder has been associated with higher rates of unemployment, lower income, and lower likelihood of living with a partner (Rief et al., 2006). Some individuals with BDD report suicidal ideation and are at increased risk for suicide attempts due to concerns about their physical appearance (Buhlmann et al., 2010 and Rief et al., 2006). Rates of comorbidity between BDD and obsessive–compulsive disorder (OCD) are as high as 30% (Gunstad and Phillips, 2003 and Phillips et al., 2005b), and both disorders share similarities in demographics, onset and illness duration (Phillips, Pinto, Menard, Eisen, Mancebo, & Rasmussen, 2007). In addition, research has demonstrated that both disorders share familial and genetic components (Bienvenu et al., 2000 and Phillips et al., 1998). OCD and BDD also share similar cognitive patterns characterized by recurrent, persistent and intrusive unwanted thoughts (Phillips, McElroy, Keck, Pope, & Hudson, 1993), and behavioral patterns such as compulsive checking (Phillips et al., 2005b and Phillips et al., 2010). Finally, BDD symptoms are common among individuals with OCD (Phillips et al., 2007). Thus, there is substantial evidence suggesting that the two disorders are related. At the same time, research has identified some key differences between OCD and BDD. For example, individuals with BDD demonstrate less insight and more delusional beliefs compared to individuals with OCD (Eisen et al., 2004 and Phillips et al., 2007). BDD is also associated with higher levels of suicidal ideation, and higher levels of major depressive disorder and substance use disorder compared to OCD (Phillips et al., 2007). Moreover, individuals with BDD have been found to have significantly greater body image impairment compared to individuals with OCD (Hrabosky et al., 2009). Finally, in comparison to OCD, the content of beliefs in BDD seems to focus more on unacceptability of the self (Veale & Riley, 2001). Recently, there has been growing evidence for the association between BDD and social anxiety disorder (SAD; see Fang & Hofmann, 2010 for a review). Research has shown that among individuals with SAD, 4.8–12% are diagnosed with BDD, and among individuals with BDD, 12–68.8% have SAD (Fang & Hofmann, 2010). Research on BDD and SAD has highlighted several commonalities including high social anxiety and social avoidance (Coles et al., 2006, Kelly et al., 2010 and Pinto and Phillips, 2005), low extraversion (Naragon-Gainey et al., 2009 and Phillips and McElroy, 2000), and high levels of embarrassment and shame (Buhlmann and Wilhelm, 2004, Conroy et al., 2008 and Fuchs, 2002). Other shared characteristics include elevated rates of suicidal ideation (Cougle et al., 2009, Phillips and Menard, 2006 and Phillips et al., 2007), negative interpretation bias for ambiguous social information (Amir et al., 1998, Buhlmann et al., 2002, Heinrichs and Hofmann, 2001 and Hofmann, 2007), and a typical age of onset in childhood to early adulthood (Phillips et al., 2005b and Wittchen and Fehm, 2003). Most studies have examined the relationship between BDD and either OCD or SAD. To our knowledge, only a single study has examined BDD among individuals with both disorders. Lochner and Stein (2010) compared rates of BDD among individuals with OCD, SAD, and panic disorder (PD) and found no significant differences between the three groups. However, the rate of BDD in the SAD group (12.2%) was approximately twice the rate of BDD in the OCD group (6.5%) and the PD group (5.4%) despite being a non-significant difference. In the present study we sought to extend these findings by examining continuous levels of body image disturbance and attitudes toward one's appearance (as opposed to a dichotomous diagnosis of BDD) among individuals with SAD, OCD and PD. Body image disturbance and attitudes toward one's appearance are on a continuum and are related to BDD such that individuals with the disorder have higher levels of body image disturbance and more dysfunctional attitudes toward their appearance compared to individuals without the disorder. Using continuous rather than dichotomous variables can help assess non-clinical levels of body image variables that may be found in the anxiety disorders and can complicate their treatment. The examination of continuous body image variables in the anxiety disorders is also important as it can shed light on whether body image disturbance and attitudes toward one's appearance are specifically related to one or more of these anxiety disorders, and on the relative strength of the associations. A group with PD was chosen as the clinical control group for several reasons. First, as mentioned above, the literature on BDD ties the disorder, its symptoms and its etiology to OCD and SAD but not to other anxiety disorders such as PD. Second, a PD group can help determine whether body image variables are specifically related to OCD and SAD or rather to anxiety disorders in general. Third, a PD group can facilitate comparison of the results with the only previous study that explicitly examined the presence of BDD in individuals with primary OCD, SAD and PD (Lochner & Stein, 2010). We expected that body image disturbance and dysfunctional attitudes toward one's appearance would be elevated in both the OCD group and the SAD group compared to the PD group, as both OCD and SAD have been previously found to be associated with BDD (e.g., Fang and Hofmann, 2010 and Mataix-Cols et al., 2007). In addition, we also expected obsessive–compulsive and social anxiety symptoms to be significantly associated with body image variables across the three groups. We included individuals in the PD group because individuals with primary PD may experience non-clinical levels of OCD and SAD symptoms that may in turn be associated with body image variables. Finally, we explored whether body image variables would be more strongly related to obsessive–compulsive symptoms or social anxiety symptoms.