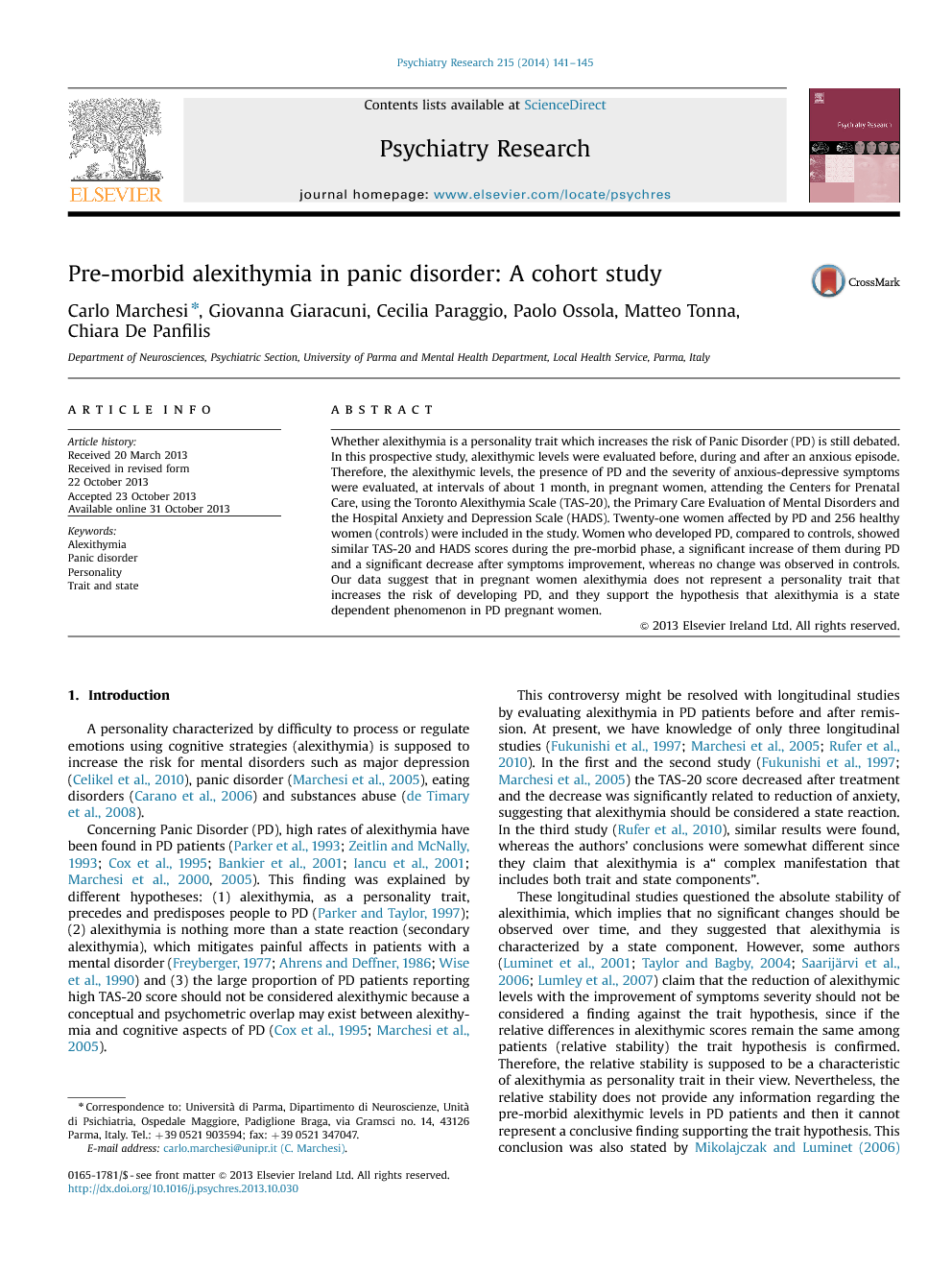 Whether alexithymia is a personality trait which increases the risk of Panic Disorder (PD) is still debated. In this prospective study, alexithymic levels were evaluated before, during and after an anxious episode. Therefore, the alexithymic levels, the presence of PD and the severity of anxious-depressive symptoms were evaluated, at intervals of about 1 month, in pregnant women, attending the Centers for Prenatal Care, using the Toronto Alexithymia Scale (TAS-20), the Primary Care Evaluation of Mental Disorders and the Hospital Anxiety and Depression Scale (HADS). Twenty-one women affected by PD and 256 healthy women (controls) were included in the study. Women who developed PD, compared to controls, showed similar TAS-20 and HADS scores during the pre-morbid phase, a significant increase of them during PD and a significant decrease after symptoms improvement, whereas no change was observed in controls. Our data suggest that in pregnant women alexithymia does not represent a personality trait that increases the risk of developing PD, and they support the hypothesis that alexithymia is a state dependent phenomenon in PD pregnant women.

A personality characterized by difficulty to process or regulate emotions using cognitive strategies (alexithymia) is supposed to increase the risk for mental disorders such as major depression (Celikel et al., 2010), panic disorder (Marchesi et al., 2005), eating disorders (Carano et al., 2006) and substances abuse (de Timary et al., 2008). Concerning Panic Disorder (PD), high rates of alexithymia have been found in PD patients (Parker et al., 1993, Zeitlin and McNally, 1993, Cox et al., 1995, Bankier et al., 2001, Iancu et al., 2001, Marchesi et al., 2000 and Marchesi et al., 2005). This finding was explained by different hypotheses: (1) alexithymia, as a personality trait, precedes and predisposes people to PD (Parker and Taylor, 1997); (2) alexithymia is nothing more than a state reaction (secondary alexithymia), which mitigates painful affects in patients with a mental disorder (Freyberger, 1977, Ahrens and Deffner, 1986 and Wise et al., 1990) and (3) the large proportion of PD patients reporting high TAS-20 score should not be considered alexithymic because a conceptual and psychometric overlap may exist between alexithymia and cognitive aspects of PD (Cox et al., 1995 and Marchesi et al., 2005). This controversy might be resolved with longitudinal studies by evaluating alexithymia in PD patients before and after remission. At present, we have knowledge of only three longitudinal studies (Fukunishi et al., 1997, Marchesi et al., 2005 and Rufer et al., 2010). In the first and the second study (Fukunishi et al., 1997 and Marchesi et al., 2005) the TAS-20 score decreased after treatment and the decrease was significantly related to reduction of anxiety, suggesting that alexithymia should be considered a state reaction. In the third study (Rufer et al., 2010), similar results were found, whereas the authors’ conclusions were somewhat different since they claim that alexithymia is a“ complex manifestation that includes both trait and state components”. These longitudinal studies questioned the absolute stability of alexithimia, which implies that no significant changes should be observed over time, and they suggested that alexithymia is characterized by a state component. However, some authors (Luminet et al., 2001, Taylor and Bagby, 2004, Saarijärvi et al., 2006 and Lumley et al., 2007) claim that the reduction of alexithymic levels with the improvement of symptoms severity should not be considered a finding against the trait hypothesis, since if the relative differences in alexithymic scores remain the same among patients (relative stability) the trait hypothesis is confirmed. Therefore, the relative stability is supposed to be a characteristic of alexithymia as personality trait in their view. Nevertheless, the relative stability does not provide any information regarding the pre-morbid alexithymic levels in PD patients and then it cannot represent a conclusive finding supporting the trait hypothesis. This conclusion was also stated by Mikolajczak and Luminet (2006) (two authors supporting the trait hypothesis), who claimed that “the stability of alexithymia scores at follow-up would not constitute evidence that alexithymia preceded mental disorder”. In our knowledge no studies have investigated alexithymia in a premorbid phase of PD. Therefore, the present study was aimed to verify how alexithymic levels were before, during and after a PD episode. For this purpose we evaluated alexithymia and the presence of an episode of PD in a sample of women, attending the Centers for Prenatal Care, at approximately monthly intervals during the whole pregnancy.