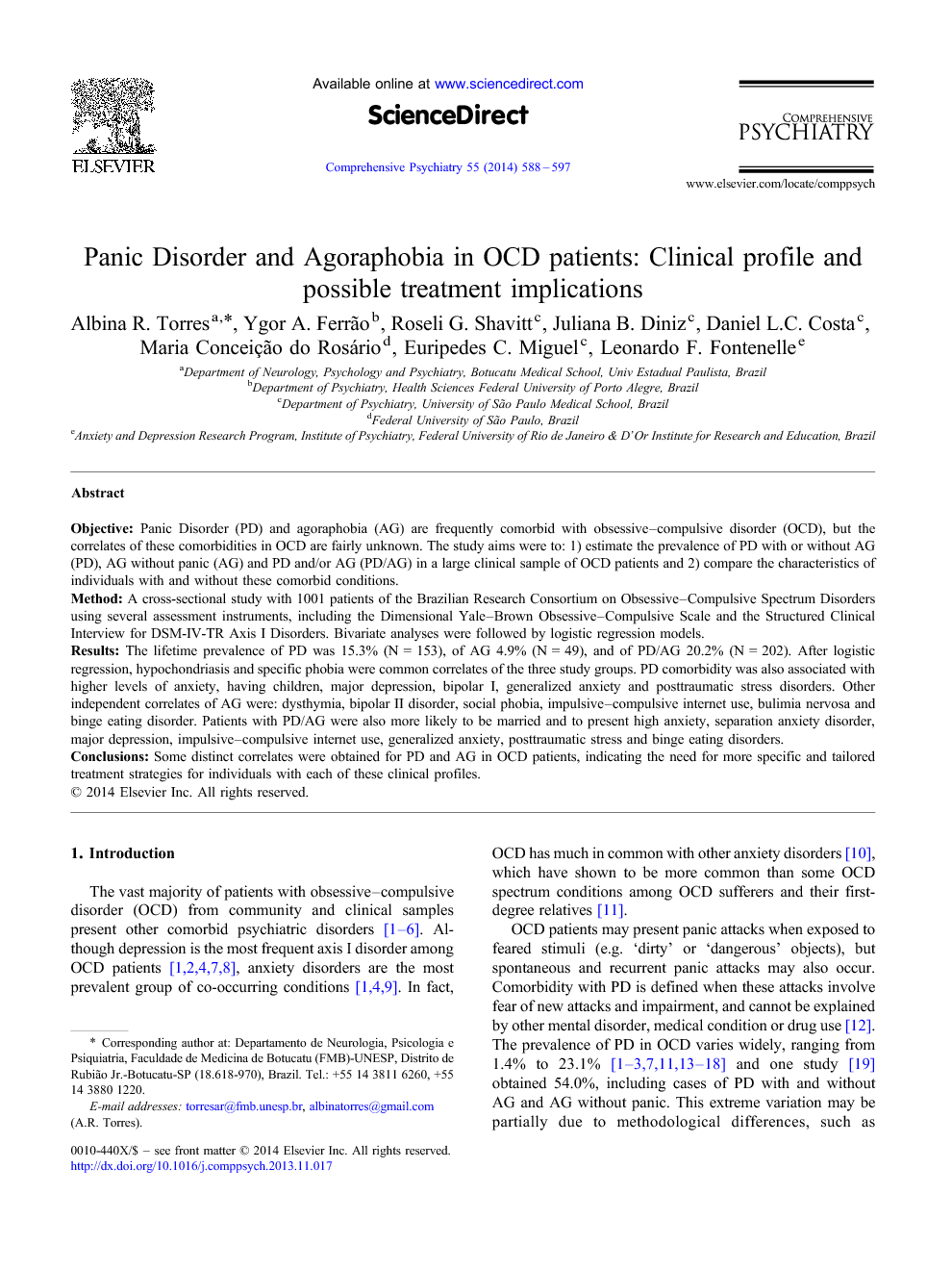 Objective Panic Disorder (PD) and agoraphobia (AG) are frequently comorbid with obsessive–compulsive disorder (OCD), but the correlates of these comorbidities in OCD are fairly unknown. The study aims were to: 1) estimate the prevalence of PD with or without AG (PD), AG without panic (AG) and PD and/or AG (PD/AG) in a large clinical sample of OCD patients and 2) compare the characteristics of individuals with and without these comorbid conditions. Method A cross-sectional study with 1001 patients of the Brazilian Research Consortium on Obsessive–Compulsive Spectrum Disorders using several assessment instruments, including the Dimensional Yale–Brown Obsessive–Compulsive Scale and the Structured Clinical Interview for DSM-IV-TR Axis I Disorders. Bivariate analyses were followed by logistic regression models. Results The lifetime prevalence of PD was 15.3% (N = 153), of AG 4.9% (N = 49), and of PD/AG 20.2% (N = 202). After logistic regression, hypochondriasis and specific phobia were common correlates of the three study groups. PD comorbidity was also associated with higher levels of anxiety, having children, major depression, bipolar I, generalized anxiety and posttraumatic stress disorders. Other independent correlates of AG were: dysthymia, bipolar II disorder, social phobia, impulsive–compulsive internet use, bulimia nervosa and binge eating disorder. Patients with PD/AG were also more likely to be married and to present high anxiety, separation anxiety disorder, major depression, impulsive–compulsive internet use, generalized anxiety, posttraumatic stress and binge eating disorders. Conclusions Some distinct correlates were obtained for PD and AG in OCD patients, indicating the need for more specific and tailored treatment strategies for individuals with each of these clinical profiles.

The vast majority of patients with obsessive–compulsive disorder (OCD) from community and clinical samples present other comorbid psychiatric disorders [1], [2], [3], [4], [5] and [6]. Although depression is the most frequent axis I disorder among OCD patients [1], [2], [4], [7] and [8], anxiety disorders are the most prevalent group of co-occurring conditions [1], [4] and [9]. In fact, OCD has much in common with other anxiety disorders [10], which have shown to be more common than some OCD spectrum conditions among OCD sufferers and their first-degree relatives [11]. OCD patients may present panic attacks when exposed to feared stimuli (e.g. ‘dirty’ or ‘dangerous’ objects), but spontaneous and recurrent panic attacks may also occur. Comorbidity with PD is defined when these attacks involve fear of new attacks and impairment, and cannot be explained by other mental disorder, medical condition or drug use [12]. The prevalence of PD in OCD varies widely, ranging from 1.4% to 23.1% [1], [2], [3], [7], [11], [13], [14], [15], [16], [17] and [18] and one study [19] obtained 54.0%, including cases of PD with and without AG and AG without panic. This extreme variation may be partially due to methodological differences, such as assessment instruments, interviewers, diagnostic categories (panic with/without agoraphobia, agoraphobia without panic attacks or both), diagnostic criteria, estimation period (e.g. current, 12-month or lifetime prevalence), sample selection (epidemiological, clinical) and inclusion/exclusion criteria. The co-occurrence of OCD and PD is mainly due to PD comorbidity in OCD sufferers, given that usually lower rates of OCD have been reported in primary PD patients [19]. The rates of comorbidity are influenced by the degree of overlapping features of the disorders. OCD and PD present many phenotypical similarities, including anxiety manifestations (e.g. apprehension or future-oriented mood states, hyper vigilant style and situational avoidance) [20], hypochondriac preoccupations and overestimation of risks [10]. Safety seeking avoidant behaviors are important features of both OCD and AG, but in the cognitive domain, whereas excessive responsibility and guilt are central in OCD [21], and fear of dying and ‘fear of fear’ are the main dysfunctional beliefs among PD/AG sufferers [22] and [23]. Despite the controversies regarding the concept of comorbidity [24], the co-occurrence of multiple mental disorders is a challenge for mental health professionals because it is usually associated with higher levels of suffering and interference in everyday functioning, help seeking and suicidality, which makes the management more complex [25] and [26]. Moreover, comorbidity between these conditions seems to affect treatment outcome negatively [10] and may also have important implications for the understanding of the etiology of the anxiety disorders [20]. To our knowledge, the correlates of PD/AG comorbidity in OCD sufferers have never been specifically investigated. Therefore, this exploratory study aimed not only to estimate the lifetime prevalence of PD (with and without AG), of AG without panic and of either condition in a multicenter clinical sample of OCD patients, but also to investigate the demographic and clinical characteristics independently associated with PD and AG comorbidities. A comprehensive clinical evaluation was conducted and some features were investigated using innovative assessment instruments (e.g. the Dimensional Yale–Brown Obsessive–Compulsive Scale to evaluate the presence and severity of OCD symptom dimensions and the USP-Sensory Phenomena Scale to assess sensory phenomena). Given that the literature usually reports PD/AG findings together, we could only hypothesize that OCD patients with comorbid PD/AG, compared to those without PD/AG would: (1) be more frequently female [27] and more impaired, as indicated by lower educational, occupational and socioeconomic levels [1], [27] and [28]; (2) present greater clinical severity, including obsessive–compulsive, anxious and depressive symptoms [1] and [7] and more suicidal thoughts and attempts [29], [30], [31], [32], [33], [34] and [35]; (3) present more aggressive symptoms [36] and comorbidity with depressive [37], [38] and [39] and bipolar disorders [40], [41], [42] and [43], other anxiety disorders [44], [45] and [46], hypochondriasis [47], [48] and [49], somatization disorder [47], tic disorders [44] and substance use disorders [50].

One in each five OCD patients presented either PD or AG, configuring fairly common co-occurring conditions, which enhance the complexity not only of OCD phenotype, but probably also of the therapeutic management. For instance, OCD patients with PD/AG may be more resistant to exposure techniques, for fear of a panic attack, and more likely to drop out of treatment. Moreover, mainly distinct correlates were obtained for PD and AG comorbidities in OCD patients, indicating the need for more specific and tailored treatment strategies for individuals with each of these clinical profiles.