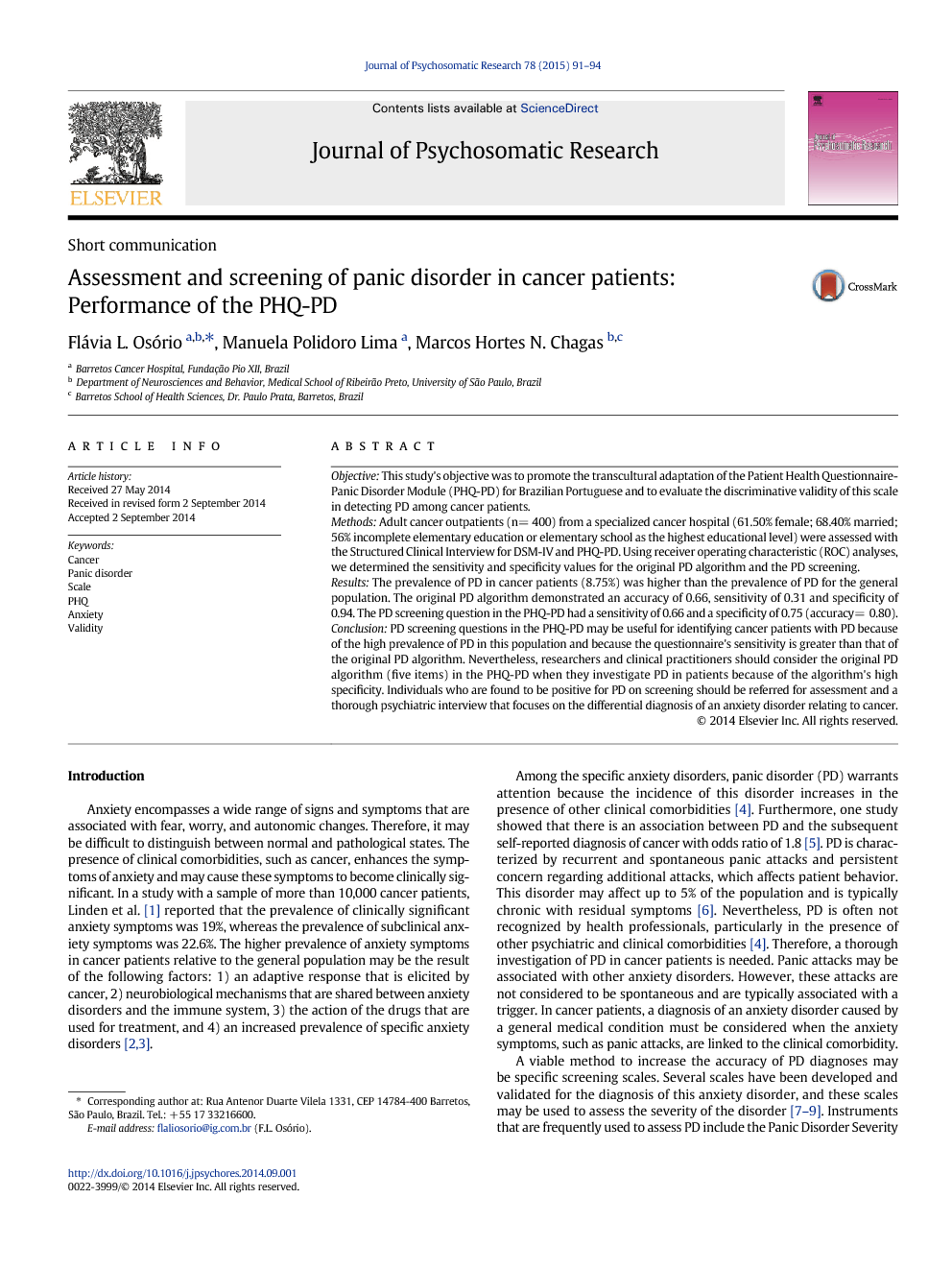 Objective This study's objective was to promote the transcultural adaptation of the Patient Health Questionnaire-Panic Disorder Module (PHQ-PD) for Brazilian Portuguese and to evaluate the discriminative validity of this scale in detecting PD among cancer patients. Methods Adult cancer outpatients (n= 400) from a specialized cancer hospital (61.50% female; 68.40% married; 56% incomplete elementary education or elementary school as the highest educational level) were assessed with the Structured Clinical Interview for DSM-IV and PHQ-PD. Using receiver operating characteristic (ROC) analyses, we determined the sensitivity and specificity values for the original PD algorithm and the PD screening. Results The prevalence of PD in cancer patients (8.75%) was higher than the prevalence of PD for the general population. The original PD algorithm demonstrated an accuracy of 0.66, sensitivity of 0.31 and specificity of 0.94. The PD screening question in the PHQ-PD had a sensitivity of 0.66 and a specificity of 0.75 (accuracy= 0.80). Conclusion PD screening questions in the PHQ-PD may be useful for identifying cancer patients with PD because of the high prevalence of PD in this population and because the questionnaire's sensitivity is greater than that of the original PD algorithm. Nevertheless, researchers and clinical practitioners should consider the original PD algorithm (five items) in the PHQ-PD when they investigate PD in patients because of the algorithm's high specificity. Individuals who are found to be positive for PD on screening should be referred for assessment and a thorough psychiatric interview that focuses on the differential diagnosis of an anxiety disorder relating to cancer.

Anxiety encompasses a wide range of signs and symptoms that are associated with fear, worry, and autonomic changes. Therefore, it may be difficult to distinguish between normal and pathological states. The presence of clinical comorbidities, such as cancer, enhances the symptoms of anxiety and may cause these symptoms to become clinically significant. In a study with a sample of more than 10,000 cancer patients, Linden et al. [1] reported that the prevalence of clinically significant anxiety symptoms was 19%, whereas the prevalence of subclinical anxiety symptoms was 22.6%. The higher prevalence of anxiety symptoms in cancer patients relative to the general population may be the result of the following factors: 1) an adaptive response that is elicited by cancer, 2) neurobiological mechanisms that are shared between anxiety disorders and the immune system, 3) the action of the drugs that are used for treatment, and 4) an increased prevalence of specific anxiety disorders [2] and [3]. Among the specific anxiety disorders, panic disorder (PD) warrants attention because the incidence of this disorder increases in the presence of other clinical comorbidities [4]. Furthermore, one study showed that there is an association between PD and the subsequent self-reported diagnosis of cancer with odds ratio of 1.8 [5]. PD is characterized by recurrent and spontaneous panic attacks and persistent concern regarding additional attacks, which affects patient behavior. This disorder may affect up to 5% of the population and is typically chronic with residual symptoms [6]. Nevertheless, PD is often not recognized by health professionals, particularly in the presence of other psychiatric and clinical comorbidities [4]. Therefore, a thorough investigation of PD in cancer patients is needed. Panic attacks may be associated with other anxiety disorders. However, these attacks are not considered to be spontaneous and are typically associated with a trigger. In cancer patients, a diagnosis of an anxiety disorder caused by a general medical condition must be considered when the anxiety symptoms, such as panic attacks, are linked to the clinical comorbidity. A viable method to increase the accuracy of PD diagnoses may be specific screening scales. Several scales have been developed and validated for the diagnosis of this anxiety disorder, and these scales may be used to assess the severity of the disorder [7], [8] and [9]. Instruments that are frequently used to assess PD include the Panic Disorder Severity Scale, which consists of seven items and must be administered by a trained clinical practitioner [10], and the Panic-Associated Symptom Scale, which provides a score that is based on the frequency and intensity of five symptoms that are considered to be essential for a PD diagnosis. This scale must be administered by a clinical practitioner [8]. Because these scales feature multiple items and must be administered by clinical practitioners, their use in screening is limited. Therefore, for PD screening, instruments that are brief, self-administered, and easy to understand are preferred. A brief version of the Patient Health Questionnaire-Panic Disorder Module (PHQ-PD) includes five self-applied dichotomous items (yes/no) that are easy to answer [10]. Originally proposed in English, the PHQ-PD was tested in a sample of primary care patients and exhibited adequate psychometric indicators. However, the use and validity of this scale in populations with medical comorbidities have not been well tested. These studies were performed with outpatients from gynecology and medical clinic sectors and with hospitalized patients [10] and [11]. In distinction from other PHQ modules, such as PHQ-9 (depression) and GAD-7 (anxiety), to the best of our knowledge, no study has been conducted using PHQ-PD with samples of cancer patients [12], [13], [14], [15] and [16]. Therefore, this study's aim was to promote the transcultural adaptation of the PHQ-PD for Brazilian Portuguese and to evaluate the discriminant validity of this scale in detecting PD among cancer patients.