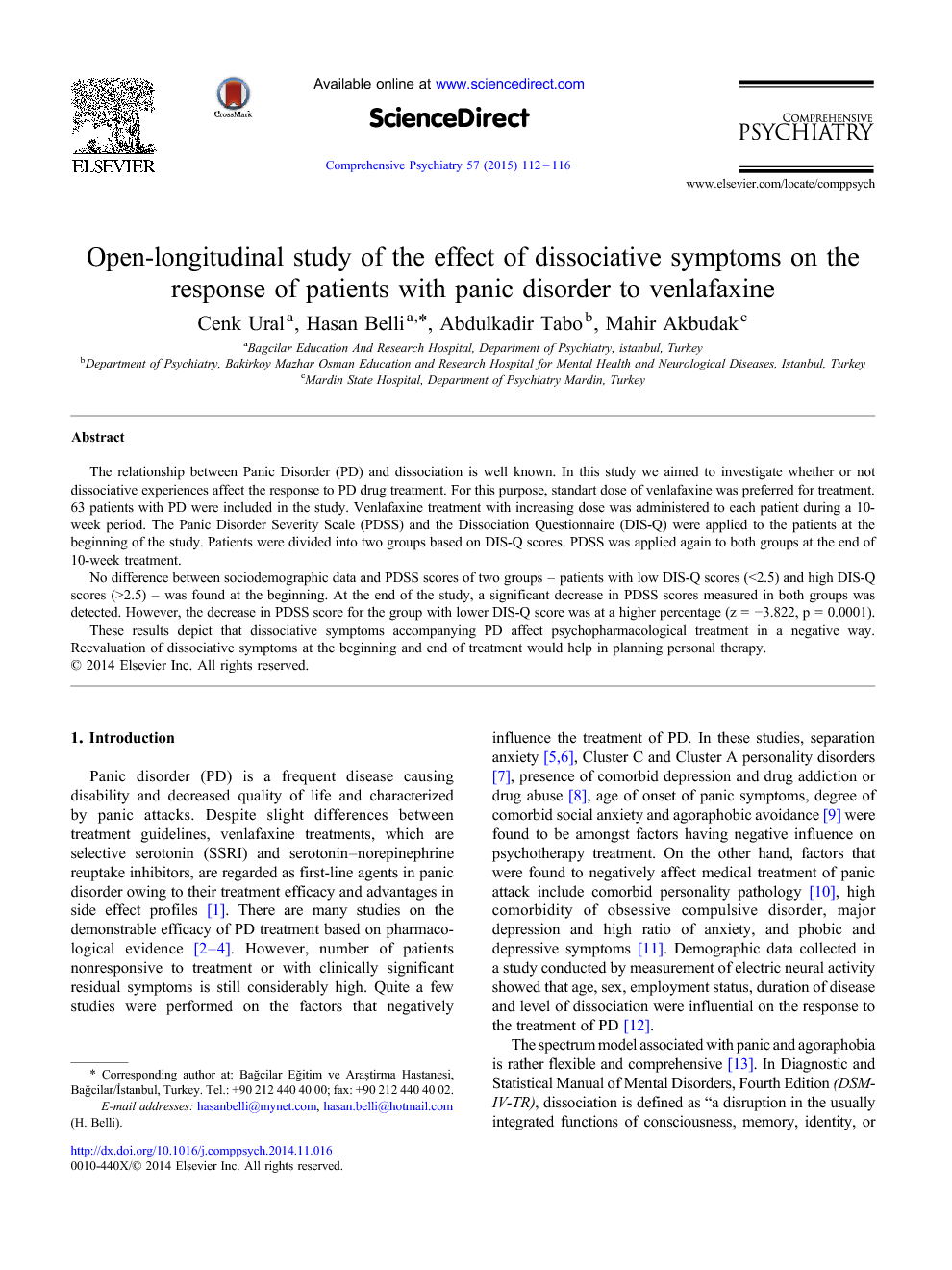 The relationship between Panic Disorder (PD) and dissociation is well known. In this study we aimed to investigate whether or not dissociative experiences affect the response to PD drug treatment. For this purpose, standart dose of venlafaxine was preferred for treatment. 63 patients with PD were included in the study. Venlafaxine treatment with increasing dose was administered to each patient during a 10-week period. The Panic Disorder Severity Scale (PDSS) and the Dissociation Questionnaire (DIS-Q) were applied to the patients at the beginning of the study. Patients were divided into two groups based on DIS-Q scores. PDSS was applied again to both groups at the end of 10-week treatment. No difference between sociodemographic data and PDSS scores of two groups – patients with low DIS-Q scores (<2.5) and high DIS-Q scores (>2.5) – was found at the beginning. At the end of the study, a significant decrease in PDSS scores measured in both groups was detected. However, the decrease in PDSS score for the group with lower DIS-Q score was at a higher percentage (z = −3.822, p = 0.0001). These results depict that dissociative symptoms accompanying PD affect psychopharmacological treatment in a negative way. Reevaluation of dissociative symptoms at the beginning and end of treatment would help in planning personal therapy. Gadget timed out while loading

Panic disorder (PD) is a frequent disease causing disability and decreased quality of life and characterized by panic attacks. Despite slight differences between treatment guidelines, venlafaxine treatments, which are selective serotonin (SSRI) and serotonin–norepinephrine reuptake inhibitors, are regarded as first-line agents in panic disorder owing to their treatment efficacy and advantages in side effect profiles [1]. There are many studies on the demonstrable efficacy of PD treatment based on pharmacological evidence [2], [3] and [4]. However, number of patients nonresponsive to treatment or with clinically significant residual symptoms is still considerably high. Quite a few studies were performed on the factors that negatively influence the treatment of PD. In these studies, separation anxiety [5] and [6], Cluster C and Cluster A personality disorders [7], presence of comorbid depression and drug addiction or drug abuse [8], age of onset of panic symptoms, degree of comorbid social anxiety and agoraphobic avoidance [9] were found to be amongst factors having negative influence on psychotherapy treatment. On the other hand, factors that were found to negatively affect medical treatment of panic attack include comorbid personality pathology [10], high comorbidity of obsessive compulsive disorder, major depression and high ratio of anxiety, and phobic and depressive symptoms [11]. Demographic data collected in a study conducted by measurement of electric neural activity showed that age, sex, employment status, duration of disease and level of dissociation were influential on the response to the treatment of PD [12]. The spectrum model associated with panic and agoraphobia is rather flexible and comprehensive [13]. In Diagnostic and Statistical Manual of Mental Disorders, Fourth Edition (DSM-IV-TR), dissociation is defined as “a disruption in the usually integrated functions of consciousness, memory, identity, or perception of environment” and also as a complex psychopathological process that occurs on a continuum ranging from minor normative dissociations to psychiatric conditions [14]. In a study on an outpatient psychiatric population, dissociative disorders that were not clinically diagnosed before were found at a high percentage [15]. Dissociative symptoms may co-exist with many psychiatric diseases such as borderline personality disorder [16] and [17], conversion disorder [18], obsessive–compulsive disorder [19] and [20], schizophrenia [21] or, especially, PD [22]. In a study by Sierra et al. it was claimed that dissociative symptoms might be observed at a frequency between 10% and 60%, and might change based on culture [23]. In another study it was found that dissociative experiences affected outcome of cognitive behavioral therapy negatively in patients with obsessive–compulsive disorder [20]. Studies regarding the effects of dissociative symptoms on the treatment of PD were detected by reviewing related literature. Results of these studies depict that dissociative symptoms with comorbid PD negatively affect psychotherapeutic [24] and [25] and psychopharmacologic [26] treatment outcomes. When related literature was reviewed, it was reported that dissociative symptomatology can be a very important factor in not responding to treatment. This condition can involve only treatment resistance to psychotherapy. In this study we aimed to investigate whether or not dissociative experiences affect the response to PD drug treatment. We hypothesized that: people with a low dissociation score at baseline have a much better response to standardized drug treatment than do people with a high dissociation score; and dissociation scores at baseline also influence treatment outcome. For this purpose, 10-week, open ended-longitudinal venlafaxine treatment at standard dose was administered to the patients.