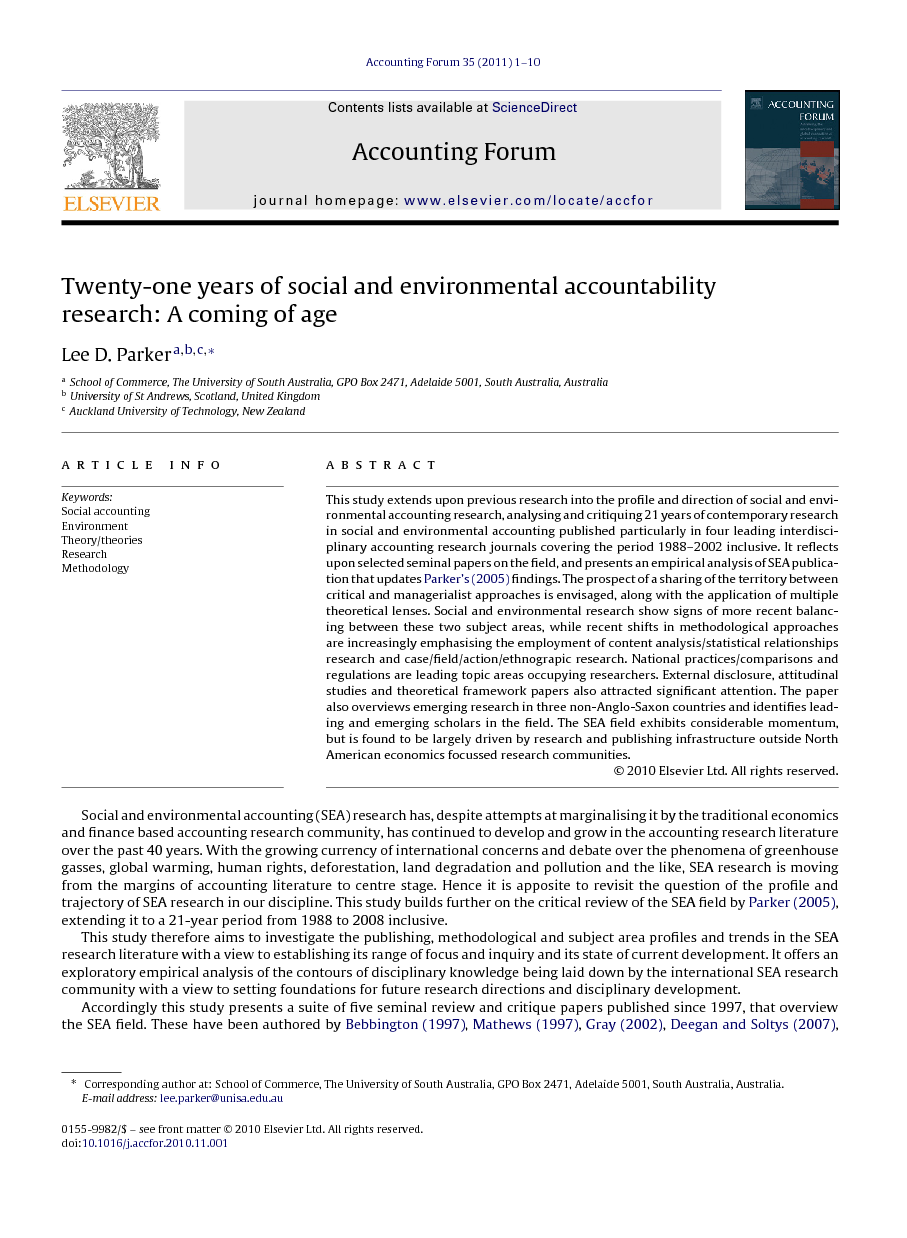 This study extends upon previous research into the profile and direction of social and environmental accounting research, analysing and critiquing 21 years of contemporary research in social and environmental accounting published particularly in four leading interdisciplinary accounting research journals covering the period 1988–2002 inclusive. It reflects upon selected seminal papers on the field, and presents an empirical analysis of SEA publication that updates Parker's (2005) findings. The prospect of a sharing of the territory between critical and managerialist approaches is envisaged, along with the application of multiple theoretical lenses. Social and environmental research show signs of more recent balancing between these two subject areas, while recent shifts in methodological approaches are increasingly emphasising the employment of content analysis/statistical relationships research and case/field/action/ethnograpic research. National practices/comparisons and regulations are leading topic areas occupying researchers. External disclosure, attitudinal studies and theoretical framework papers also attracted significant attention. The paper also overviews emerging research in three non-Anglo-Saxon countries and identifies leading and emerging scholars in the field. The SEA field exhibits considerable momentum, but is found to be largely driven by research and publishing infrastructure outside North American economics focussed research communities.

Social and environmental accounting (SEA) research has, despite attempts at marginalising it by the traditional economics and finance based accounting research community, has continued to develop and grow in the accounting research literature over the past 40 years. With the growing currency of international concerns and debate over the phenomena of greenhouse gasses, global warming, human rights, deforestation, land degradation and pollution and the like, SEA research is moving from the margins of accounting literature to centre stage. Hence it is apposite to revisit the question of the profile and trajectory of SEA research in our discipline. This study builds further on the critical review of the SEA field by Parker (2005), extending it to a 21-year period from 1988 to 2008 inclusive. This study therefore aims to investigate the publishing, methodological and subject area profiles and trends in the SEA research literature with a view to establishing its range of focus and inquiry and its state of current development. It offers an exploratory empirical analysis of the contours of disciplinary knowledge being laid down by the international SEA research community with a view to setting foundations for future research directions and disciplinary development. Accordingly this study presents a suite of five seminal review and critique papers published since 1997, that overview the SEA field. These have been authored by Bebbington (1997), Mathews (1997), Gray (2002), Deegan and Soltys (2007), and Owen (2008). These are briefly revisited. As its central focus, this study presents a 21-year profile of SEA research and publication in its leading journals since 1988. It provides a perspective on the volume of research activity, the balance between social and environmental accounting focussed papers, as well as examining the range and changing emphasis of research methodologies employed and the specific topic areas of researcher focus. The paper also profiles the leading and emerging scholars in the SEA field. Research in three non-Anglo-Saxon countries that are most prominent in SEA research are briefly considered as hallmarks of the European contribution that has hitherto not been adequately recognised by the international community.

From a European and Australian perspective, the journals AAAJ, Accounting Forum and CPA have clearly been the dominant publishers of social and environmental accounting research. This stands in marked contrast to the total absence of SEA research from leading north American accounting research journals operating through the tunnel vision of an exclusively economics dominated paradigm. The corpus of published SEA research is now considerable, numbering over 170 published papers in the four journals AAAJ, AF, CPA, and AOS in the 21-year study period 1998–2008. Of these journals, AAAJ has maintained the most even balance between social and environmentally focussed research but notably after a trend towards environment dominating the SEA research agenda, recent years have seen a rebalancing of emphasis between social responsibility and environmental responsibility focussed research by authors published in the four journals in recent years. Similarly, the range of research methods applied in this field have broadened and rebalanced across a full suite of methods in more recent years. Theory and engagement with practice remain outstanding issues for the SEA research community. Researchers continue to wrestle with a multiplicity of theoretical approaches and possibilities. Doubtless more innovation and experimentation with alternative and previously untried theoretical lenses awaits us. Engagement between research and practice continues to be a debate between advocates for radical action, regulation, business and profession rapport, business case rationales and more. The research literature in this area swings between moods of optimism and pessimism. What has also been notable has been an expansion of SEA research attention into public/government, non-profit and NGO sectors. This has brought new illuminations of a wider array of organisational activity, stakeholders and engagement into the formerly corporate SEA focussed literature. The findings and observations of leading research groups based outside the Anglo-Saxon countries makes for instructive indicators of the international state of SEA. Unfortunately they make for salutary reading. In multiple locations we see evidence of corporate impression and reputational risk management as organisations take up the SEA rhetoric in response to perceived community and institutional interest and pressures. Nonetheless, theirs often appears to be a predominantly reactive and self-interested strategy that masks a persistent driving economic agenda while portraying a legitimising social and environmental responsibility image. The win–win alliance between the social, environmental and economic agendas is often promulgated but conceals an underlying ongoing privileging of the economic. Government complacency and minimalist organisational compliance with SEA reporting regulations and guidelines remains an all too commonly observed occurrence. Nonetheless the SEA research community remains alive and well. Researchers can be found in many countries across Europe, North America, Asia, Africa and Australasia. Nonetheless the European and Australasian researchers still dominate the literature, but with signs of a growing emergence of Asian and North American researcher output. The now well established coterie of SEA researcher networks, the growing circuit of SEA supportive research conferences, and the range of esteemed research journals internationally facilitating the SEA agenda, augur well for the future of research and practice in this field. That is also evidenced by the 21-year record of research output presented here. Despite the challenges, the momentum portrayed in this paper suggests room for optimism, possibly conveyed best by Toad of Toad Hall (Grahame, 1908/1995, p. 37): “The whole world before you, and a horizon that's always changing!