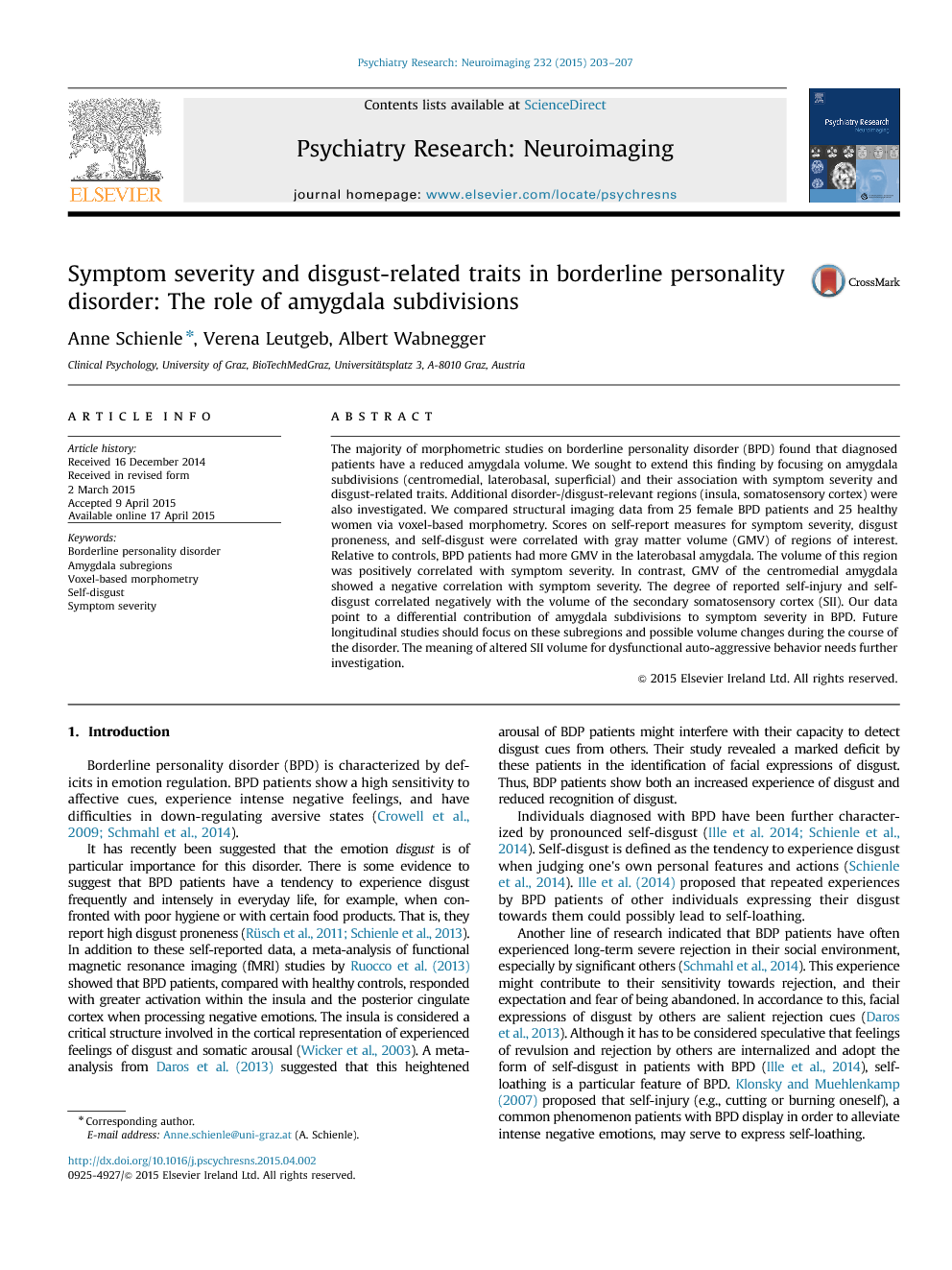 The majority of morphometric studies on borderline personality disorder (BPD) found that diagnosed patients have a reduced amygdala volume. We sought to extend this finding by focusing on amygdala subdivisions (centromedial, laterobasal, superficial) and their association with symptom severity and disgust-related traits. Additional disorder-/disgust-relevant regions (insula, somatosensory cortex) were also investigated. We compared structural imaging data from 25 female BPD patients and 25 healthy women via voxel-based morphometry. Scores on self-report measures for symptom severity, disgust proneness, and self-disgust were correlated with gray matter volume (GMV) of regions of interest. Relative to controls, BPD patients had more GMV in the laterobasal amygdala. The volume of this region was positively correlated with symptom severity. In contrast, GMV of the centromedial amygdala showed a negative correlation with symptom severity. The degree of reported self-injury and self-disgust correlated negatively with the volume of the secondary somatosensory cortex (SII). Our data point to a differential contribution of amygdala subdivisions to symptom severity in BPD. Future longitudinal studies should focus on these subregions and possible volume changes during the course of the disorder. The meaning of altered SII volume for dysfunctional auto-aggressive behavior needs further investigation.

Borderline personality disorder (BPD) is characterized by deficits in emotion regulation. BPD patients show a high sensitivity to affective cues, experience intense negative feelings, and have difficulties in down-regulating aversive states (Crowell et al., 2009 and Schmahl et al., 2014). It has recently been suggested that the emotion disgust is of particular importance for this disorder. There is some evidence to suggest that BPD patients have a tendency to experience disgust frequently and intensely in everyday life, for example, when confronted with poor hygiene or with certain food products. That is, they report high disgust proneness ( Rüsch et al., 2011 and Schienle et al., 2013). In addition to these self-reported data, a meta-analysis of functional magnetic resonance imaging (fMRI) studies by Ruocco et al. (2013) showed that BPD patients, compared with healthy controls, responded with greater activation within the insula and the posterior cingulate cortex when processing negative emotions. The insula is considered a critical structure involved in the cortical representation of experienced feelings of disgust and somatic arousal ( Wicker et al., 2003). A meta-analysis from Daros et al. (2013) suggested that this heightened arousal of BDP patients might interfere with their capacity to detect disgust cues from others. Their study revealed a marked deficit by these patients in the identification of facial expressions of disgust. Thus, BDP patients show both an increased experience of disgust and reduced recognition of disgust. Individuals diagnosed with BPD have been further characterized by pronounced self-disgust (Ille et al., 2014 and Schienle et al., 2014). Self-disgust is defined as the tendency to experience disgust when judging one׳s own personal features and actions (Schienle et al., 2014). Ille et al. (2014) proposed that repeated experiences by BPD patients of other individuals expressing their disgust towards them could possibly lead to self-loathing. Another line of research indicated that BDP patients have often experienced long-term severe rejection in their social environment, especially by significant others (Schmahl et al., 2014). This experience might contribute to their sensitivity towards rejection, and their expectation and fear of being abandoned. In accordance to this, facial expressions of disgust by others are salient rejection cues (Daros et al., 2013). Although it has to be considered speculative that feelings of revulsion and rejection by others are internalized and adopt the form of self-disgust in patients with BPD (Ille et al., 2014), self-loathing is a particular feature of BPD. Klonsky and Muehlenkamp (2007) proposed that self-injury (e.g., cutting or burning oneself), a common phenomenon patients with BPD display in order to alleviate intense negative emotions, may serve to express self-loathing. The amygdala is – besides the insula – a key structure for the perception of disgust-relevant information and affective signals in general (e.g., Schienle et al., 2002a and Schienle et al., 2002b). The human amygdala is, however, not a uniform structure, but one that can be divided into three major subdivisions: the laterobasal group, the superficial group, and the centromedial group (Ball et al., 2007). The laterobasal region, the largest substructure (Roy et al., 2009), is thought to play a central role in the decoding of affective value and social meaning, as is displayed in facial expressions (Adolphs, 2010). In addition, this subregion facilitates associative learning processes such as fear conditioning (Phelps and LeDoux, 2005). The laterobasal nuclei receive information from temporo-parietal areas as well as from the prefrontal cortex and project back to all association areas. The centromedial region, which is the smallest of the three subregions, appears to be involved in emotional arousal and affective reactions; it plays a significant role in generating behavioral responses through projections to the brainstem, as well as to cortical and striatal regions (e.g., Roy et al., 2009). Less is known about the superficial nucleus, which is located between the laterobasal and superficial portions. Animal studies found that this subregion is linked with intraspecies communication via olfactory stimuli (Moreno and Gonzalez, 2007). Human studies revealed that the superficial subregion extracts the social value of incoming sensory information, such as facial expressions (e.g., Goossens et al., 2009). In the past years, morphometric investigations have revealed contradictory findings for this disorder. For example, Schmahl et al. (2009) compared BPD patients, with and without comorbid posttraumatic stress disorder (PTSD), and healthy controls. They observed no differences in bilateral amygdala volume among the three groups. A previous study of this research group (Schmahl et al., 2003) had detected reduced left and right amygdala gray matter in patients with BPD, whereas Zetzsche et al. (2006) found increased amygdala volume in both hemispheres in those BPD patients with an additional major depression diagnosis. These studies have raised the possibility that altered amygdala volume might relate to comorbidity in BPD. A recent meta-analysis of data from a large sample of 205 individuals with BPD and 222 healthy controls (94% women, mean age=30.4 years) provided a more coherent picture and revealed an average amygdala volume reduction of 13% for the patient group. A diminished volume of 14.2% and 11.6% could be found for the left and right amygdala, respectively (Ruocco et al., 2012). Clinical variables such as current medication and history of abuse were not correlated with amygdala volume. The partially conflicting volumetric findings may result from the fact that specific amygdala subregions are affected in different ways in BPD. This was investigated in the present voxel-based morphometry (VBM) study. Moreover, we analyzed whether the volume of these subdivisions and other BPD/disgust-relevant regions of interest (e.g., insula, secondary somatosensory cortex) would be correlated with disgust-related personality traits (disgust proneness, self-disgust) and syndrome severity. We expected reduced volume in at least one amygdala subdivision as well as negative correlations between GMV of amygdala subregions and BPD symptoms. Positive correlations were predicted for measures of trait disgust and insula volume.