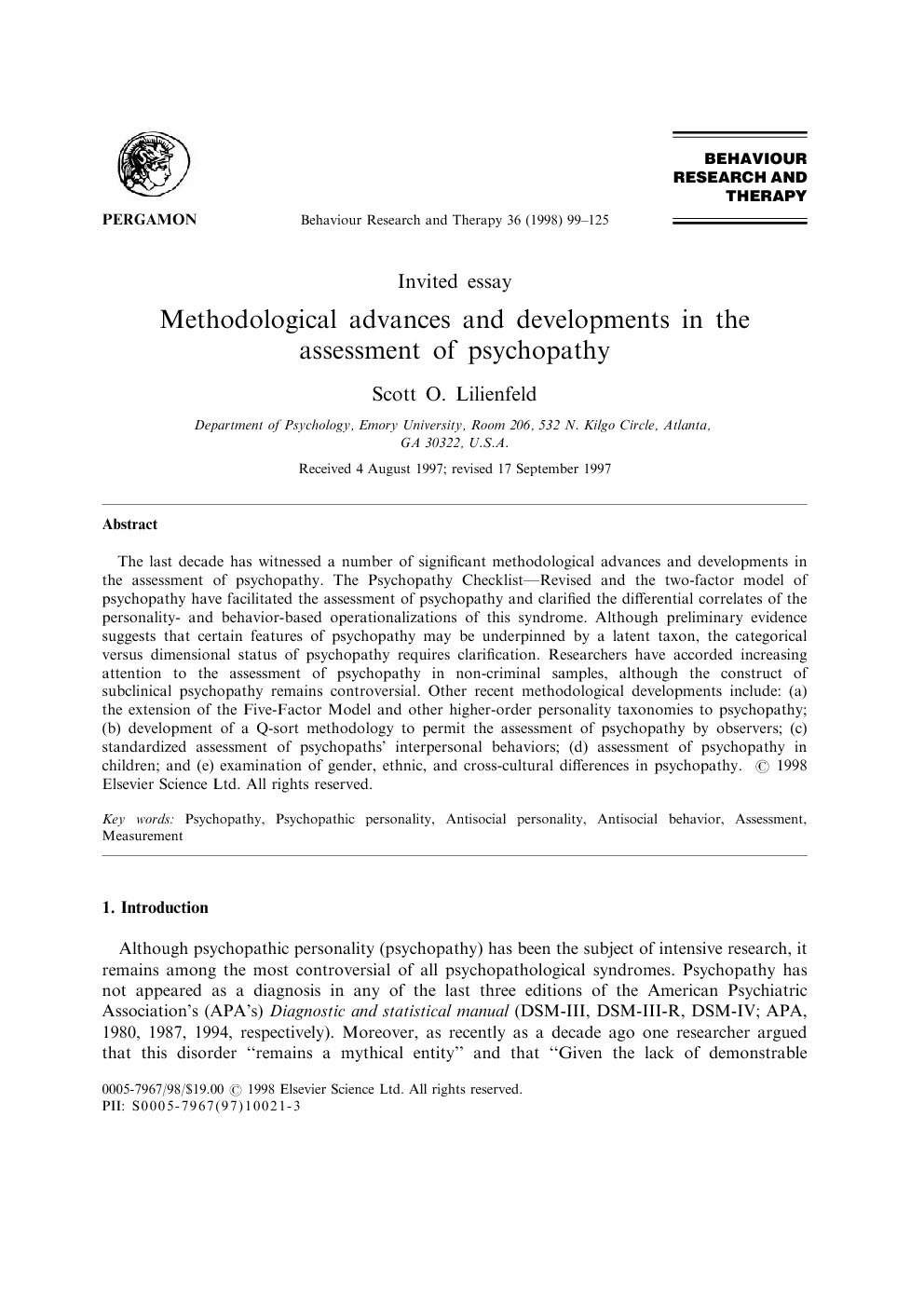 Although psychopathic personality (psychopathy) has been the subject of intensive research, it remains among the most controversial of all psychopathological syndromes. Psychopathy has not appeared as a diagnosis in any of the last three editions of the American Psychiatric Association's (APA's) Diagnostic and statistical manual (DSM-III, DSM-III-R, DSM-IV; APA, 1980, APA, 1987 and APA, 1994, respectively). Moreover, as recently as a decade ago one researcher argued that this disorder “remains a mythical entity” and that “Given the lack of demonstrable scientific or clinical utility of the concept, it should be discarded” ( Blackburn, 1988, p. 511). The lingering doubts besetting the diagnosis of psychopathy are perhaps best exemplified by the following quotation from Sir Aubrey Lewis: “The diagnostic subgroupings of psychiatry seldom have sharp and definite limits. Some are worse than others in this respect. Worst of all is psychopathic personality, with its wavering outlines” ( Lewis, 1974, p. 139). Why has the psychopathy construct been so plagued by controversy? Until recently (i.e. 10 years ago), the methodological obstacles presented by the assessment of psychopathy were regarded as extremely formidable, if not intractible. The results of several studies (Hare, 1985a; Hundleby and Ross, 1977; Widom and Newman, 1985) indicated that most measures of psychopathy are weakly intercorrelated. Moreover, even these low correlations appear to reflect method factors (e.g. self-report vs interview) more than content overlap (Hare, 1985a). In addition, most self-report psychopathy measures, including the Minnesota Multiphasic Personality Inventory (MMPI) Psychopathic deviate (Pd) scale (McKinley and Hathaway, 1944) and the California Psychological Inventory (CPI) Socialization (So) scale (Gough, 1969), correlate neglibly with many of the central personality features of psychopathy (Harpur et al., 1989). Nevertheless, the last decade has witnessed a dramatic resurgence in research on psychopathy, along with a renewed optimism regarding its assessment. In this article, I examine advances and developments in psychopathy assessment that have transpired since the last comprehensive review of research on the measurement of psychopathy (Hare and Cox, 1978). I argue that several methodological innovations have improved our capacity to reliably and validly operationalize this construct, and enchanced our understanding of its behavioral and laboratory correlates. Some of these innovations have, however, revealed new challenges and unresolved questions for future researchers. For reasons to become clearer in the next section, I focus on the classical construct of psychopathy, rather than the DSM-IV (APA, 1994) diagnosis of antisocial personality disorder (ASPD). Issues in the assessment of ASPD have been reviewed elsewhere (Lilienfeld, et al., in press; Widiger and Corbitt, 1993) and will not be examined here. Before examining recent trends in the assessment of psychopathy, however, a review of longstanding problems in its conceptualization is required.

Several major methodological improvements in the past decade have contributed to a better understanding of psychopathy, and brought into sharper focus a number of important unresolved questions for future research. Although several issues merit increased attention from psychopathy researchers in the next decade, the categorical vs dimensional status of psychopathy is of particular importance in its implications for both the conceptualization and assessment of this syndrome. If psychopathy is underpinned by a latent taxon, researchers who conduct psychopathy research in non-criminal samples must ensure that this taxon possesses a sufficiently high base rate in their samples to render their research valid and generalizable to other samples. The PCL-R, particularly the two-factor model it has spawned, has clarified the differential correlates of the personality- and behavior-based operationalizations of psychopathy, and revealed important differences between the traditional conception of psychopathy (Cleckley, 1941/1982) and the DSM-IV diagnosis of ASPD. The two-factor model has provided a useful vehicle for examining the construct of subclinical psychopathy and the factors that may buffer individuals with high levels of psychopathic traits from developing antisocial behavior. Nevertheless, because most psychopathy research has been conducted on prison samples and other samples with high rates of antisocial behavior, the potential of the two-factor model to elucidate these issues has not been fully realized. Most of the empirical literature on psychopathy remains a literature on unsuccessful psychopathy. In this regard, McCrae and Costa's (1995) distinction between basic tendencies and characteristic adaptations may serve as an overarching framework for examining the differential implications of the personality- and behavior-based approaches to psychopathy. If the core personality features (i.e. basic tendencies) of psychopathy can in fact be expressed in a variety of characteristic adaptations depending on certain moderating variables (e.g. IQ, impulse control, gender), this might imply that such personality features only manifest themselves in overt antisocial behavior among a subset of individuals. Indeed, these personality features might even predispose certain individuals toward prosocial (e.g. heroic), rather than antisocial, behaviors given the proper environmental conditions (Lykken, 1995). The identification of factors that may shape the characteristic adaptations of psychopaths' basic tendencies should become a priority for the psychopathy researchers of the next decade. For this to occur, however, researchers will increasingly need to move outside of prison walls to examine the manifestations of psychopathic traits in real-world settings.