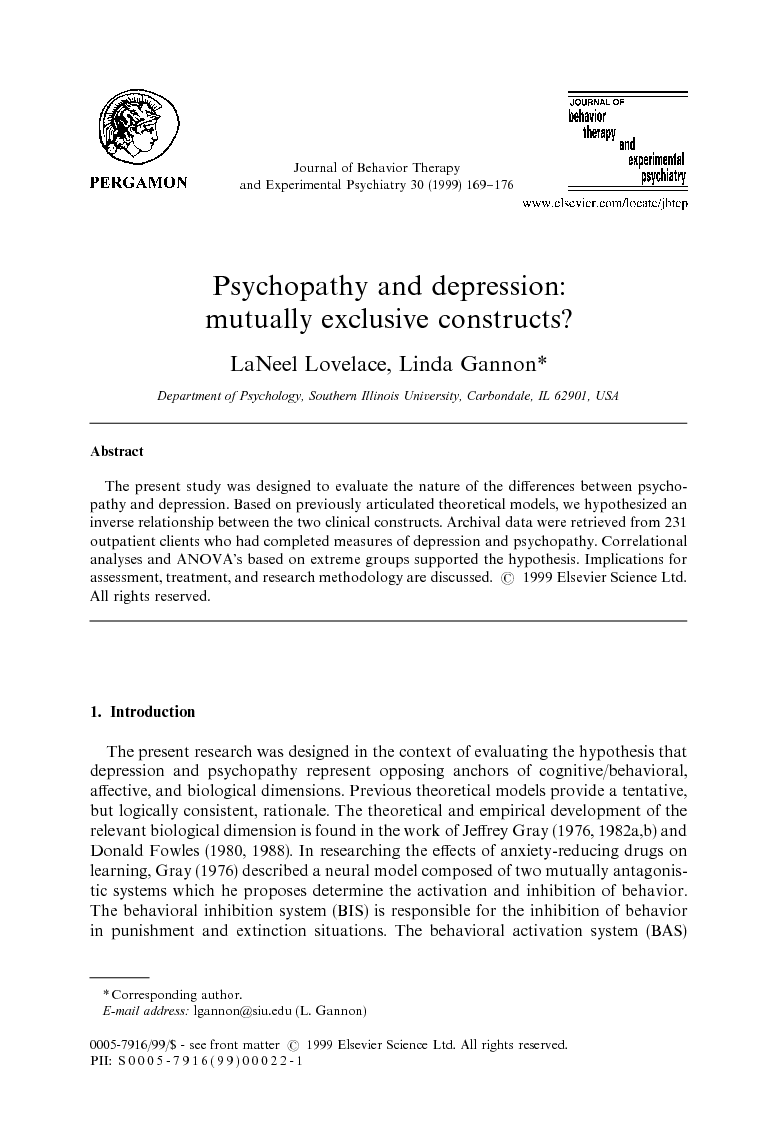 The present study was designed to evaluate the nature of the differences between psychopathy and depression. Based on previously articulated theoretical models, we hypothesized an inverse relationship between the two clinical constructs. Archival data were retrieved from 231 outpatient clients who had completed measures of depression and psychopathy. Correlational analyses and ANOVA's based on extreme groups supported the hypothesis. Implications for assessment, treatment, and research methodology are discussed.

The present research was designed in the context of evaluating the hypothesis that depression and psychopathy represent opposing anchors of cognitive/behavioral, affective, and biological dimensions. Previous theoretical models provide a tentative, but logically consistent, rationale. The theoretical and empirical development of the relevant biological dimension is found in the work of Jeffrey Gray, 1976, Gray, 1982a and Gray, 1982b and Donald Fowles, 1980 and Fowles, 1988. In researching the effects of anxiety-reducing drugs on learning, Gray (1976) described a neural model composed of two mutually antagonistic systems which he proposes determine the activation and inhibition of behavior. The behavioral inhibition system (BIS) is responsible for the inhibition of behavior in punishment and extinction situations. The behavioral activation system (BAS) responds to incentives and rewards and mediates active escape and avoidance. Gray's early work focused on the effects of anti-anxiety drugs on learning. Since he viewed the BIS as the neural substrate of anxiety, Gray's initial theoretical formulations emphasized the BIS rather than the relationship between the BIS and the BAS. Relating his, essentially biological, model to personality, Gray (1982a) noted parallels with Eysenck's introversion and neuroticism dimensions. Tellegen (1985) reviewed these arguments and concluded that the BIS and BAS more closely correspond to his trait factors of Positive Emotionality and Negative Emotionality. State measures of these traits have been developed and subjected to rigorous psychometric criteria (Watson, Clark & Tellegen, 1988). Subsequent research has consistently supported the view that anxiety is associated with high levels of Negative Affect (NA) but is unrelated to Positive Affect (PA) while depression is associated with both high levels of NA and low levels of PA (Gannon, Vaux, Rhodes & Luchetta, 1992; Watson, Clark & Carey, 1988). Incorporating Tellegen's argument that the BAS is the neural substrate for PA and the BIS the neural substrate of NA, depression may then be described as an overactive BIS combined with an underactive BAS. Fowles (1988) reached a conclusion similar to that of Tellegen but with a somewhat different emphasis when he described an inactive BAS as a primary etiological factor in depression but acceded that there may be an increase in aversive motivation (BIS) as well. Also inspired by Gray's work, Fowles, 1980 and Fowles, 1988 developed a model of psychopathy that integrated physiological and behavioral phenomena. Fowles suggested that various clinical features of psychopathy — the lack of anxiety when faced with threatening stimuli, an inability to inhibit behavior when faced with punishment or the absence of reward, an inability to learn from previously punished or non-rewarded situations, and a lower tolerance for alcohol — may be due to a deficient BIS. Although implied in Gray's work, Fowles made explicit the reciprocal antagonism between the two motivational systems. He suggested that the diminished activity of the BIS, said to characterize psychopathy, upset the BAS-BIS balance allowing the BAS fuller expression; disinhibition combined with enhanced reward-seeking is consistent with the clinical picture of the psychopath as one who, not only lacks anxiety, guilt, and remorse, but also one who actively, and without conscience, seeks excitement and pleasure. Various research findings in the areas of psychophysiology and learning are consistent with this model of psychopathy. For example, psychopaths, compared to normal samples, have been found to experience lower levels of anxiety as measured by skin conductance in anticipation of aversive stimuli in laboratory situations (Hare, Frazelle & Cox, 1978; Hare & Craigen, 1974; Tharp, Maltzman, Syndulko & Ziskind, 1980). Lidberg, Levander, Schalling and Lidberg (1978) noted similar physiological differences in urinary catecholamines between psychopaths and nonpsychopaths awaiting trial. Newman and colleagues (Newman, Patterson, Howland & Nichols, 1990) have reported psychopaths to be poor learners in passive-avoidance tasks which is consistent with a deficient BIS. Newman (1987) suggests this learning deficit may be limited to situations that involve both reward and punishment which is consistent with the additional involvement of an enhanced BAS. On a cognitive/behavioral level, depressed persons may experience slowed thinking and activity and difficulty making decisions while psychopaths are described as reckless, careless, and impulsive. Depressed persons are characterized as having excessive feelings of guilt, remorse, and empathy while psychopaths are seen as lacking in empathy and remorse and as experiencing shallow affect. The integration of Gray's biological motivation systems, Fowles’ model of psychopathy, and Tellegen's and Watson's emotionality and affect models provide the theoretical justification for proposing that psychopathy and depression may be conceptualized as representing mutually exclusive syndromes due to their occupying opposing extremes on common dimensions. The present study represents an initial exploration of this hypothesis.