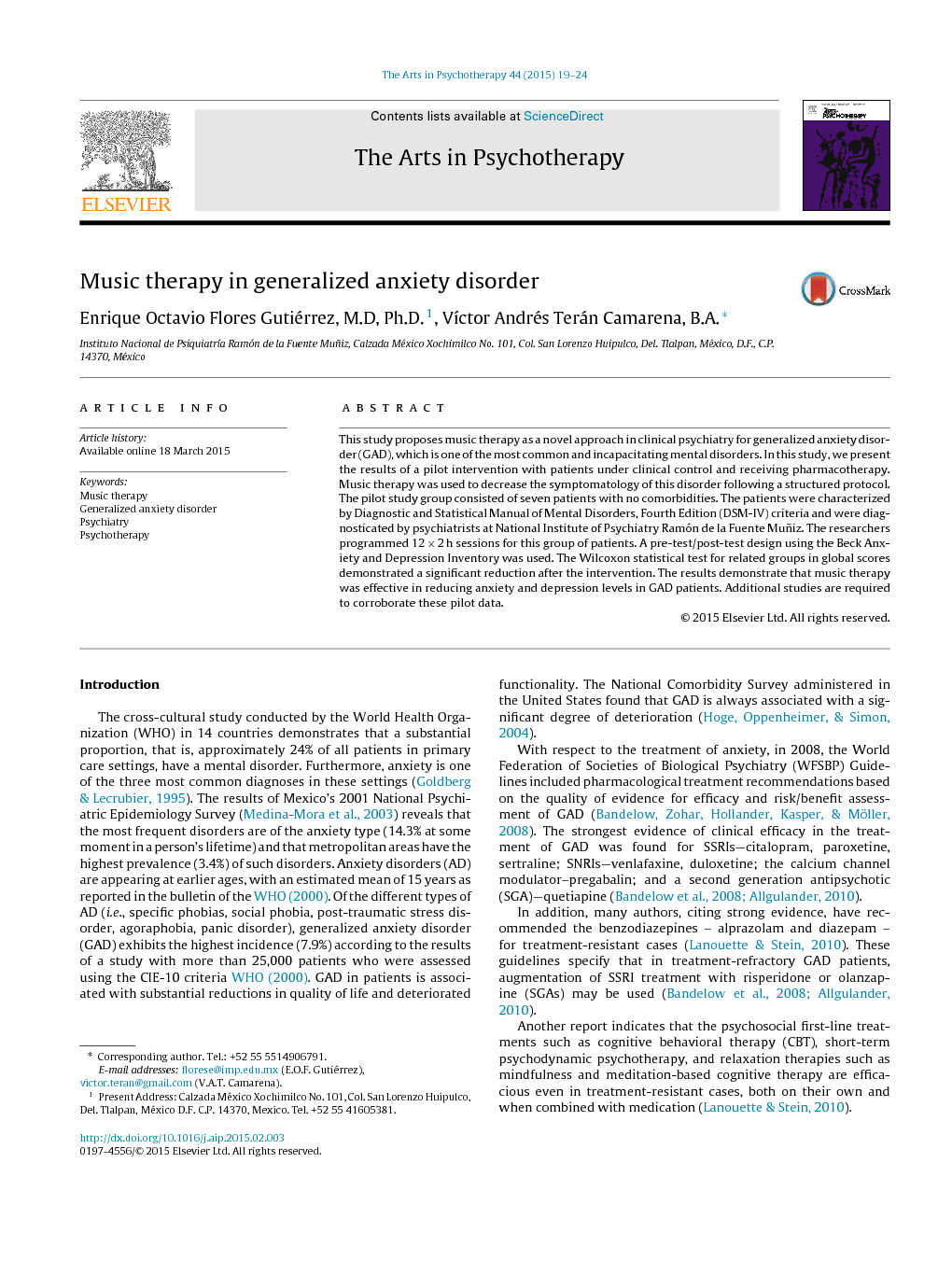 This study proposes music therapy as a novel approach in clinical psychiatry for generalized anxiety disorder (GAD), which is one of the most common and incapacitating mental disorders. In this study, we present the results of a pilot intervention with patients under clinical control and receiving pharmacotherapy. Music therapy was used to decrease the symptomatology of this disorder following a structured protocol. The pilot study group consisted of seven patients with no comorbidities. The patients were characterized by Diagnostic and Statistical Manual of Mental Disorders, Fourth Edition (DSM-IV) criteria and were diagnosticated by psychiatrists at National Institute of Psychiatry Ramón de la Fuente Muñiz. The researchers programmed 12 × 2 h sessions for this group of patients. A pre-test/post-test design using the Beck Anxiety and Depression Inventory was used. The Wilcoxon statistical test for related groups in global scores demonstrated a significant reduction after the intervention. The results demonstrate that music therapy was effective in reducing anxiety and depression levels in GAD patients. Additional studies are required to corroborate these pilot data.

The cross-cultural study conducted by the World Health Organization (WHO) in 14 countries demonstrates that a substantial proportion, that is, approximately 24% of all patients in primary care settings, have a mental disorder. Furthermore, anxiety is one of the three most common diagnoses in these settings (Goldberg & Lecrubier, 1995). The results of Mexico's 2001 National Psychiatric Epidemiology Survey (Medina-Mora et al., 2003) reveals that the most frequent disorders are of the anxiety type (14.3% at some moment in a person's lifetime) and that metropolitan areas have the highest prevalence (3.4%) of such disorders. Anxiety disorders (AD) are appearing at earlier ages, with an estimated mean of 15 years as reported in the bulletin of the WHO (2000). Of the different types of AD (i.e., specific phobias, social phobia, post-traumatic stress disorder, agoraphobia, panic disorder), generalized anxiety disorder (GAD) exhibits the highest incidence (7.9%) according to the results of a study with more than 25,000 patients who were assessed using the CIE-10 criteria WHO (2000). GAD in patients is associated with substantial reductions in quality of life and deteriorated functionality. The National Comorbidity Survey administered in the United States found that GAD is always associated with a significant degree of deterioration ( Hoge, Oppenheimer, & Simon, 2004). With respect to the treatment of anxiety, in 2008, the World Federation of Societies of Biological Psychiatry (WFSBP) Guidelines included pharmacological treatment recommendations based on the quality of evidence for efficacy and risk/benefit assessment of GAD (Bandelow, Zohar, Hollander, Kasper, & Möller, 2008). The strongest evidence of clinical efficacy in the treatment of GAD was found for SSRIs—citalopram, paroxetine, sertraline; SNRIs—venlafaxine, duloxetine; the calcium channel modulator–pregabalin; and a second generation antipsychotic (SGA)—quetiapine (Bandelow et al., 2008 and Allgulander, 2010). In addition, many authors, citing strong evidence, have recommended the benzodiazepines – alprazolam and diazepam – for treatment-resistant cases (Lanouette & Stein, 2010). These guidelines specify that in treatment-refractory GAD patients, augmentation of SSRI treatment with risperidone or olanzapine (SGAs) may be used (Bandelow et al., 2008 and Allgulander, 2010).

It appears that MT was an effective psychotherapeutic treatment in the psychiatric care of patients with GAD. The results of this pilot study demonstrate that MT was effective in reducing anxiety and depression levels in GAD patients, though it is necessary to conduct additional evaluations that consider the limitations of this study before considering this as a therapeutic option. However, the significant results of the application of MT in these cases of GAD encourage and allow us to affirm that MT could function as an effective adjuvant in treating GAD.