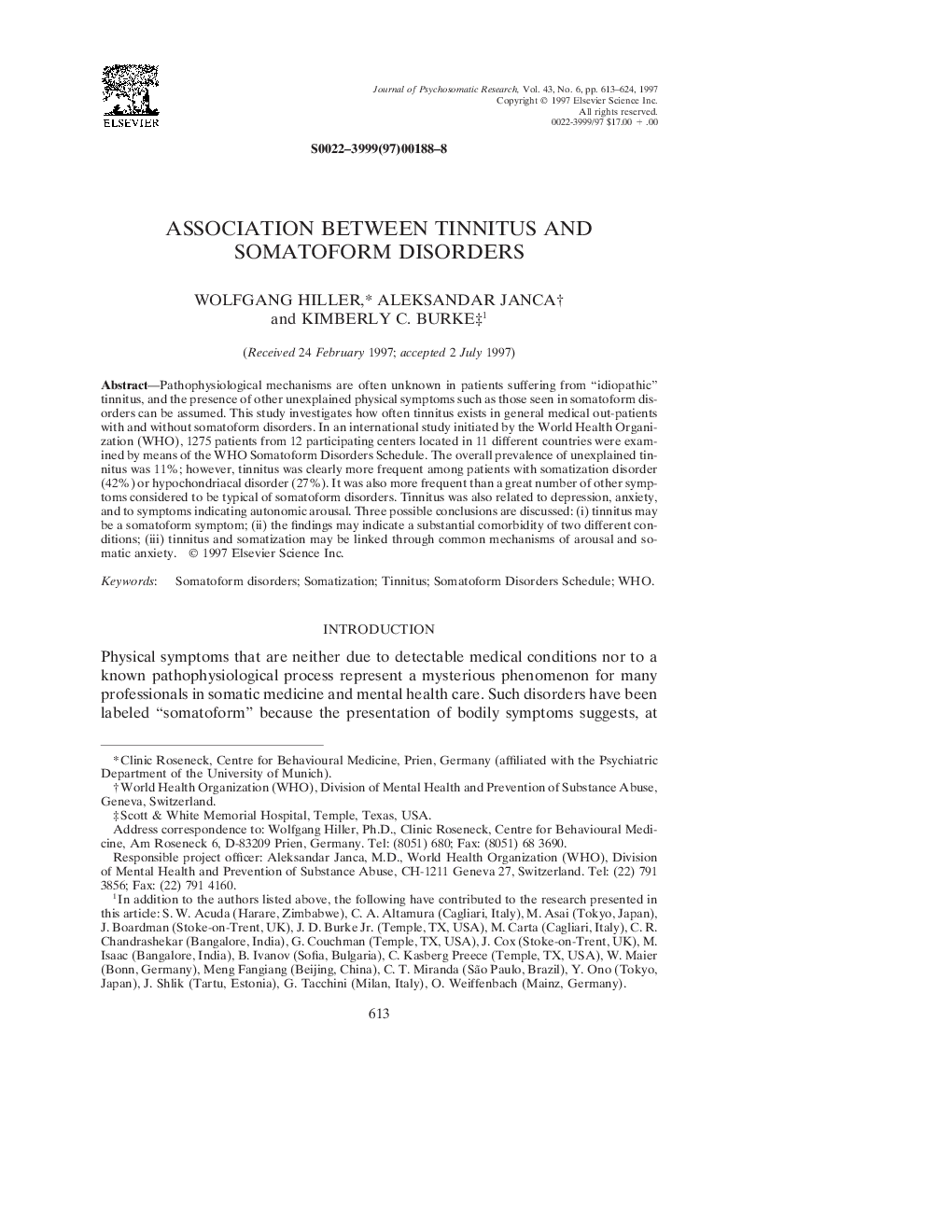 Pathophysiological mechanisms are often unknown in patients suffering from “idiopathic” tinnitus, and the presence of other unexplained physical symptoms such as those seen in somatoform disorders can be assumed. This study investigates how often tinnitus exists in general medical out-patients with and without somatoform disorders. In an international study initiated by the World Health Organization (WHO), 1275 patients from 12 participating centers located in 11 different countries were examined by means of the WHO Somatoform Disorders Schedule. The overall prevalence of unexplained tinnitus was 11%; however, tinnitus was clearly more frequent among patients with somatization disorder (42%) or hypochondriacal disorder (27%). It was also more frequent than a great number of other symptoms considered to be typical of somatoform disorders. Tinnitus was also related to depression, anxiety, and to symptoms indicating autonomic arousal. Three possible conclusions are discussed: (i) tinnitus may be a somatoform symptom; (ii) the findings may indicate a substantial comorbidity of two different conditions; (iii) tinnitus and somatization may be linked through common mechanisms of arousal and somatic anxiety.

Physical symptoms that are neither due to detectable medical conditions nor to a known pathophysiological process represent a mysterious phenomenon for many professionals in somatic medicine and mental health care. Such disorders have been labeled “somatoform” because the presentation of bodily symptoms suggests, at first glance, the existence of an organic disease. A number of subtypes of somatoform disorders such as somatization disorder, hypochondriasis, or (persistent) pain disorder are defined in the current classification systems such as the ICD-10 [1] and DSM-IV [2]. Although not explicitly included in these definitions, the symptom of ringing or buzzing in the ear (tinnitus) is also often considered to be of unknown etiology. The term “idiopathic tinnitus” is therefore used by clinicians and researchers to express their uncertainty about the origin of this symptom and the lack of causal treatment strategies 3 and 4. Only little is known so far about the similarities between tinnitus and the “classical” somatoform symptoms such as pains or complaints in the gastrointestinal, genitourinary or cardiovascular organ systems. One study using a structured diagnostic interview has found a significantly higher number of somatization symptoms in tinnitus patients as compared with a control group of neuro-otological patients without tinnitus [5]. In a more recent study with patients suffering from chronic and distressing tinnitus, Goebel and Hiller [6] reported elevated scores on the somatization scale of the Hopkins Symptom Checklist [7]. These values were in the same range as the mean standard scores of psychiatric in-patients. Significant positive correlations were also found between the SCL-90-R somatization scale and several measures of psychological and psychosomatic distress due to the chronic experience of tinnitus [8]. These studies, however, included patients with “idiopathic” tinnitus as well as forms of tinnitus that were caused by definite somatic conditions such as a clearly diagnosed inner ear dysfunction, acoustic trauma, Menière's disease, acoustic neuroma, or otosclerosis. The potential psychological and biological associations between somatoform disorders and tinnitus have probably been studied so rarely because these two conditions are linked to different research paradigms. The principal category of somatoform disorder was developed in the context of psychiatric diagnostic approaches, resulting from disease concepts such as hysteria or Briquet's syndrome. On the other hand, research on tinnitus has mainly been developed as a specialized branch of otolaryngology and audiology with multidisciplinary international tinnitus seminars being organized every 4 years 9 and 10. Although the symptom lists of different somatoform disorders comprise up to as much as 33 physical symptoms (e.g., for somatization disorder according to DSM-IV), tinnitus has not been included in any of these definitions. However, current concepts of persistent tinnitus postulate a central role of selective attention and dysfunctional cognitive processing 11, 12, 13 and 14, and similar mechanisms have also been assumed to be crucial for somatoform disorders 15, 16, 17 and 18. The data presented here stem from a study in which the assessment of somatoform disorders and tinnitus of unknown etiology was combined. In 1993, the World Health Organization (WHO) launched an international project on somatoform disorders aimed at exploring nosological, methodological, epidemiological and cross-cultural aspects of medically unexplained symptoms in different cultures [19]. This WHO project included: 1. An expert review of current knowledge on somatization [20]. 2. An international mail questionnaire survey to obtains expert opinions on cross-cultural applicability of definitions and criteria for somatoform disorders according to the most recent versions of diagnostic classifications [21]. 3. An epidemiological study of rates and culture-specific characteristics of somatoform disorders in different parts of the world. 4. Establishment of an international educational program on somatoform disorders for use in psychiatric, general medical, and primary care settings. The epidemiological study of somatoform disorders was carried out by the WHO in 11 different countries and a large body of data has been collected on more than 60 symptoms for which there was no medical explanation. One of such symptoms was “ringing or buzzing in ears or head,” which corresponds to the phenomenon defined as tinnitus. In this study we examine some of the possible associations between tinnitus and the clinical characteristics of somatoform disorders. The following points will be considered: (i) we will analyze from the above data how frequent “idiopathic” forms of tinnitus are in patients presenting with the complete syndrome of a somatoform disorder; (ii) these patients will be compared with a group of general medical patients who do not fulfill the criteria of a somatoform disorder; and (iii) the individual subgroups of somatoform disorders will be compared with respect to the occurrence of tinnitus on the one side and a variety of “classical” somatoform symptoms on the other.