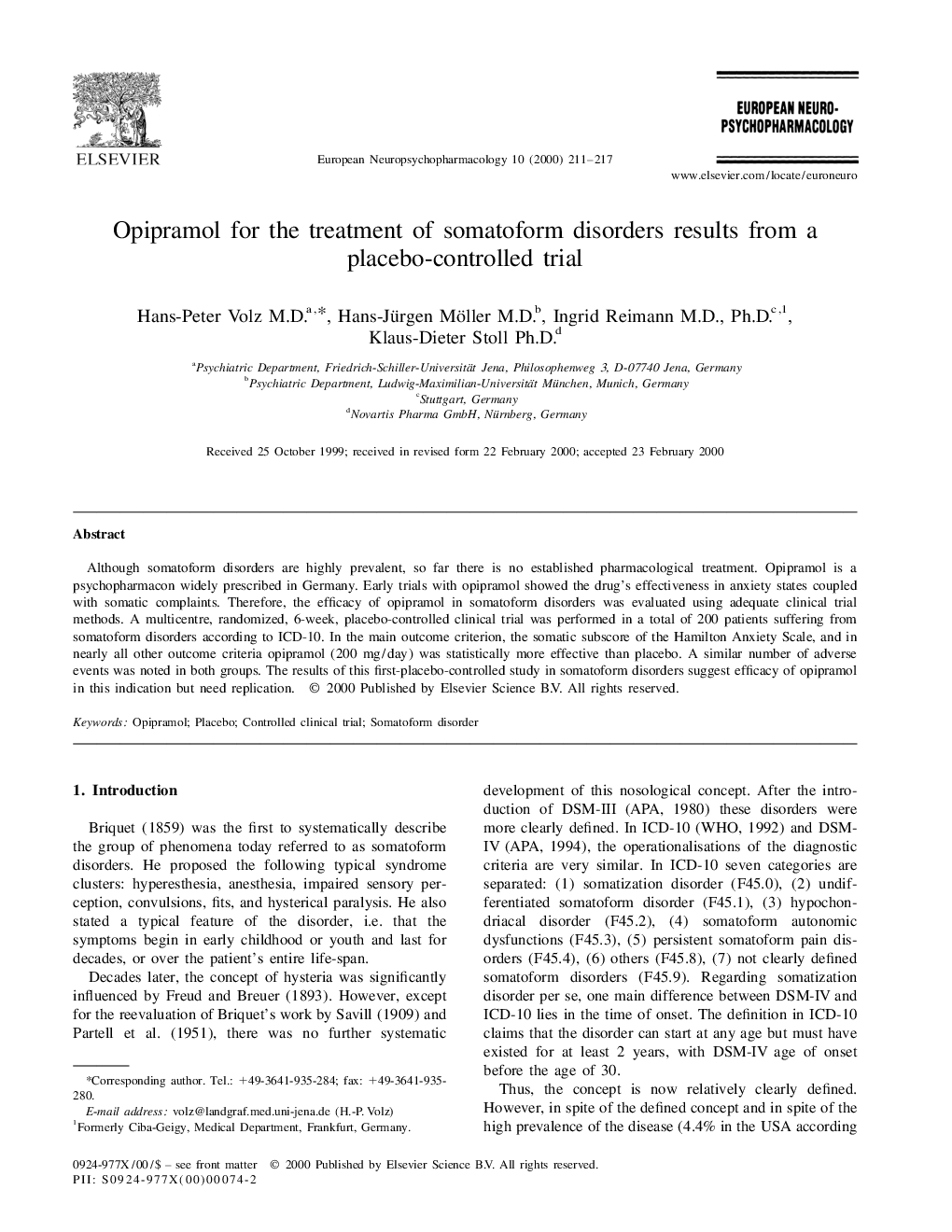 Although somatoform disorders are highly prevalent, so far there is no established pharmacological treatment. Opipramol is a psychopharmacon widely prescribed in Germany. Early trials with opipramol showed the drug’s effectiveness in anxiety states coupled with somatic complaints. Therefore, the efficacy of opipramol in somatoform disorders was evaluated using adequate clinical trial methods. A multicentre, randomized, 6-week, placebo-controlled clinical trial was performed in a total of 200 patients suffering from somatoform disorders according to ICD-10. In the main outcome criterion, the somatic subscore of the Hamilton Anxiety Scale, and in nearly all other outcome criteria opipramol (200 mg/day) was statistically more effective than placebo. A similar number of adverse events was noted in both groups. The results of this first-placebo-controlled study in somatoform disorders suggest efficacy of opipramol in this indication but need replication.

Briquet (1859) was the first to systematically describe the group of phenomena today referred to as somatoform disorders. He proposed the following typical syndrome clusters: hyperesthesia, anesthesia, impaired sensory perception, convulsions, fits, and hysterical paralysis. He also stated a typical feature of the disorder, i.e. that the symptoms begin in early childhood or youth and last for decades, or over the patient’s entire life-span. Decades later, the concept of hysteria was significantly influenced by Freud and Breuer (1893). However, except for the reevaluation of Briquet’s work by Savill (1909) and Partell et al. (1951), there was no further systematic development of this nosological concept. After the introduction of DSM-III (APA, 1980) these disorders were more clearly defined. In ICD-10 (WHO, 1992) and DSM-IV (APA, 1994), the operationalisations of the diagnostic criteria are very similar. In ICD-10 seven categories are separated: (1) somatization disorder (F45.0), (2) undifferentiated somatoform disorder (F45.1), (3) hypochondriacal disorder (F45.2), (4) somatoform autonomic dysfunctions (F45.3), (5) persistent somatoform pain disorders (F45.4), (6) others (F45.8), (7) not clearly defined somatoform disorders (F45.9). Regarding somatization disorder per se, one main difference between DSM-IV and ICD-10 lies in the time of onset. The definition in ICD-10 claims that the disorder can start at any age but must have existed for at least 2 years, with DSM-IV age of onset before the age of 30. Thus, the concept is now relatively clearly defined. However, in spite of the defined concept and in spite of the high prevalence of the disease (4.4% in the USA according to the somatic symptom index; Escobar et al., 1987 and Escobar and Canino, 1989), no established pharmacotherapy exists. This is due to the fact that to date no controlled clinical trials have been performed for somatoform disorders. After a systematic review of the literature, Volz et al. (1994) have identified nine trials. Only one of these investigations (Zitman et al., 1991) used DSM- or ICD-based inclusion criteria. However, the results of this investigation are of limited value since the cohort consisted of only 36 patients and no placebo group was included. Although there is no well-evaluated pharmacological treatment for these disorders, there are quite a few early publications regarding the drug opipramol2, which is widely prescribed in Germany. Two related areas have been investigated: (i) climacteric disturbances (evidence exists for four controlled trials including a total of ∼470 patients (Wheatley, 1971, Foldes, 1972, GPCT, 1972 and van Lith and Motké, 1983)) and (ii) anxious states or mixed states of anxiety and depressed mood with somatic complaints (a total of ∼300 patients were included in six trials (Johnson, 1966, Barritt et al., 1969, Murphy et al., 1970, Gringras and Beaumont, 1971, Waxman and Beaumont, 1972 and Jepson and Beaumont, 1973)). Two of these six trials were comparative, randomized investigations demonstrating superior effectiveness of opipramol vs. placebo (Johnson, 1966) and even vs. chlordiazepoxide (Jepson and Beaumont, 1973) in reducing somatic complaints. However, the inclusion criteria of the trials cited were not sufficiently operationalized. Opipramol is a tricyclic compound with the nucleus of the anticonvulsant carbamazepine and the side chain of the neuroleptics fluphenazine and perphenazine without reuptake inhibiting properties for serotonin (5-HT) or noradrenaline. In vitro, it blocks the following receptors in decreasing order: histamine (H1>H2), serotonin (5-HT2), dopamine (D2>D1), adrenergic (α1), and very weakly cholinergic receptors (Bischoff et al., 1980, Bischoff et al., 1986, Bischoff et al., 1988, Bischoff, 1986 and Bruinink and Bischoff, 1986). The blocking potential for H1, 5-HT2 and D2 receptors places opipramol between the classical antidepressants, atypical neuroleptics and anxiolytics (classical sedatives as well as serotonergic antagonists in the developmental state). Recent basic research also characterized opipramol as a strong sigma ligand (Musacchio et al., 1989 and Ferris et al., 1990) with complex interactions on the dopaminergic system (Rao et al., 1990a) and the NMDA receptor complex. It also induces increased levels of cGMP and it possesses anti-ischemic effects (Rao et al., 1990b). We decided to investigate the potential of opipramol compared to placebo in treating somatoform disorders both because of the clinical observations reported and the discovery of the drug’s interesting receptor blocking capacity. No active comparative drug could be included in this trial since, as stated above, there is no established pharmacological treatment for this disorder.