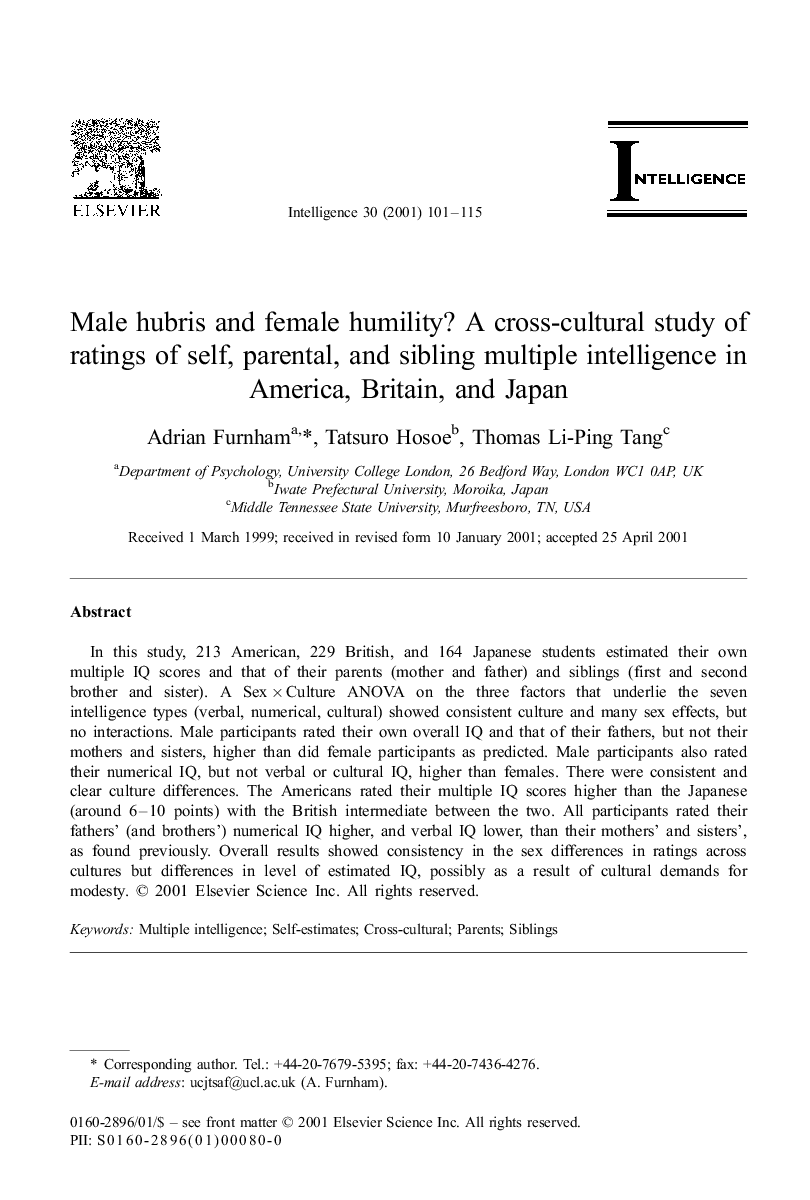 In this study, 213 American, 229 British, and 164 Japanese students estimated their own multiple IQ scores and that of their parents (mother and father) and siblings (first and second brother and sister). A Sex×Culture ANOVA on the three factors that underlie the seven intelligence types (verbal, numerical, cultural) showed consistent culture and many sex effects, but no interactions. Male participants rated their own overall IQ and that of their fathers, but not their mothers and sisters, higher than did female participants as predicted. Male participants also rated their numerical IQ, but not verbal or cultural IQ, higher than females. There were consistent and clear culture differences. The Americans rated their multiple IQ scores higher than the Japanese (around 6–10 points) with the British intermediate between the two. All participants rated their fathers' (and brothers') numerical IQ higher, and verbal IQ lower, than their mothers' and sisters', as found previously. Overall results showed consistency in the sex differences in ratings across cultures but differences in level of estimated IQ, possibly as a result of cultural demands for modesty.

The topic of intelligence always generates controversy in psychology Brand, 1996, Flynn, 1987, Halpern, 1997, Herrnstein & Murray, 1994, Howe, 1997, Lynn, 1982, Lynn, 1994, Lynn & Mulhern, 1991, Lynn & Pagliari, 1994, Mackintosh, 1998 and Sternberg, 1997. Popular debate over technical issues of IQ measurement led 50 of the world's experts on intelligence to write to the Wall Street Journal on 15th December 1994 (published Furnham, 1996). Debating the measurement of intelligence so frequently and in so much detail may well change public understanding over time. A number of studies published this decade have examined self-estimates of IQ, which may well have been informed by the public debate. This study focuses on cultural differences in self-estimated IQ, as well as sex and cultural differences in estimates of parents' and siblings' IQ. There is a body of research literature on sex differences in estimated ability that demonstrates a consistent self-enhancing bias in men and a self-degrading bias in women Beyer, 1990, Beyer, 1998 and Beyer, 1999. A number of studies have specifically examined sex differences in the overall estimate (g) of one's own IQ Beloff, 1992, Bennett, 1996, Bennett, 1997, Bennett, 2000, Byrd & Stacey, 1993, Furnham & Rawles, 1995 and Hogan, 1978 (see Table 1). With few exceptions, the results confirmed early observations that there is a consistent significant sex difference, with males estimating their (general) intelligence higher than do females. Various studies also showed males and females rated their fathers as being more intelligent than their mother Beloff, 1992, Byrd & Stacey, 1993 and Furnham & Rawles, 1995, and their grandfathers as more intelligent than their grandmothers (Furnham & Rawles, 1995). It is interesting to note that ratings of overall IQ (g) decline by about half a standard deviation for each generation back that was estimated. More recently, Furnham and Gasson (1998) found that parents estimated their male children as more intelligent than their female children (Table 1).