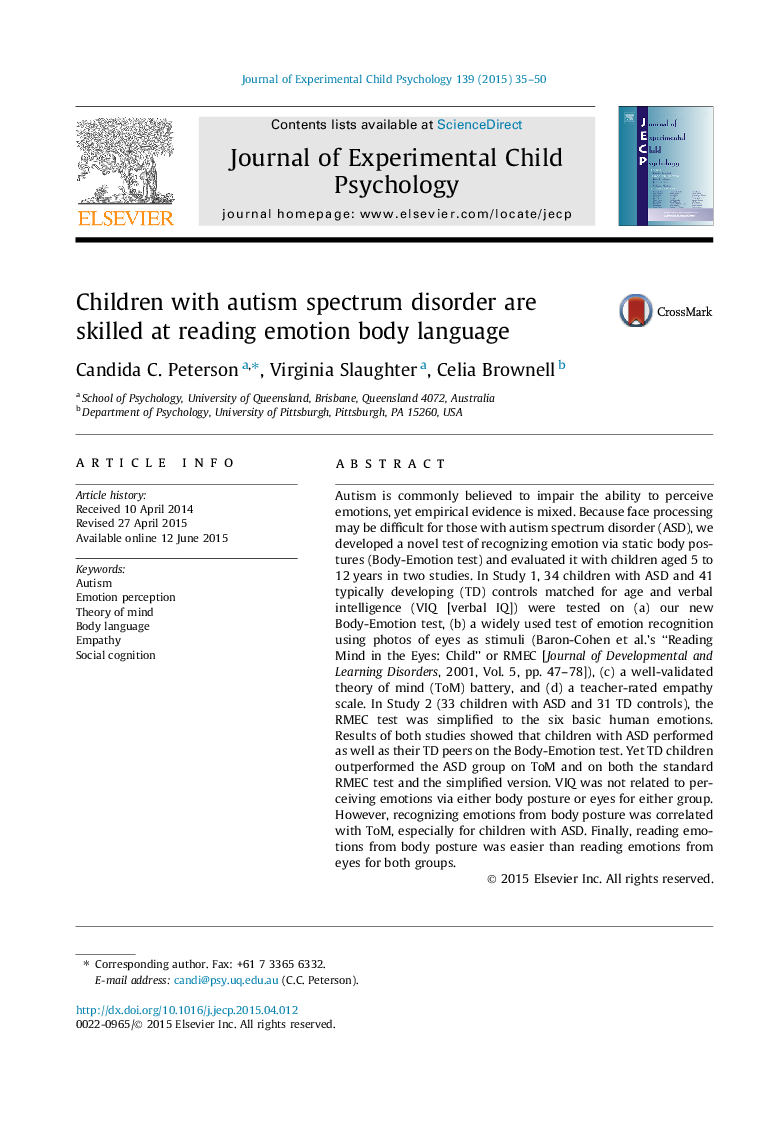 Autism is commonly believed to impair the ability to perceive emotions, yet empirical evidence is mixed. Because face processing may be difficult for those with autism spectrum disorder (ASD), we developed a novel test of recognizing emotion via static body postures (Body-Emotion test) and evaluated it with children aged 5 to 12 years in two studies. In Study 1, 34 children with ASD and 41 typically developing (TD) controls matched for age and verbal intelligence (VIQ [verbal IQ]) were tested on (a) our new Body-Emotion test, (b) a widely used test of emotion recognition using photos of eyes as stimuli (Baron-Cohen et al.’s “Reading Mind in the Eyes: Child” or RMEC [Journal of Developmental and Learning Disorders, 2001, Vol. 5, pp. 47–78]), (c) a well-validated theory of mind (ToM) battery, and (d) a teacher-rated empathy scale. In Study 2 (33 children with ASD and 31 TD controls), the RMEC test was simplified to the six basic human emotions. Results of both studies showed that children with ASD performed as well as their TD peers on the Body-Emotion test. Yet TD children outperformed the ASD group on ToM and on both the standard RMEC test and the simplified version. VIQ was not related to perceiving emotions via either body posture or eyes for either group. However, recognizing emotions from body posture was correlated with ToM, especially for children with ASD. Finally, reading emotions from body posture was easier than reading emotions from eyes for both groups.

Autism spectrum disorder (ASD) is a lifelong neurodevelopmental disorder involving core deficits in the domains of interpersonal communication and social interaction as well as restricted repetitive mannerisms and interests (American Psychiatric Association, 2000 and American Psychiatric Association, 2013). Furthermore, from its initial identification as a clinical condition (Kanner, 1943), problems in various aspects of emotional competence have been deemed central to ASD, including impaired recognition and expression of affect during social exchange (see Begeer, Koot, Rieffe, Meerum Terwogt, & Stegge, 2008, for a review). In light of this, it is surprising that the empirical evidence for deficits in emotion perception by individuals with ASD is not yet clear-cut. Scores of controlled laboratory studies over several decades have examined emotion perception by asking children, adolescents, and adults with ASD to label emotions expressed by pictured faces, facially expressive cartoons, video clips, or audiotaped tones of voice. Yet the overall evidence remains mixed, limited, and contradictory. Some studies of children with ASD (e.g., Davies et al., 1994 and Hobson, 1986) have shown emotion perception deficits, whereas other studies with similar measures and samples have not revealed significant differences from typical peers’ performance (e.g., Ozonoff et al., 1990 and Prior et al., 1990). The same is true in studies of adolescents and adults with ASD (e.g., Doody and Bull, 2013 and Philip et al., 2010). Three comprehensive reviews of research in this area have recently been published. Reflective of the inconsistencies among individual studies, each of these reviews reached somewhat differing conclusions. Uljarevic and Hamilton (2013) conducted a meta-analytic review of studies primarily testing face perception and concluded that there was a small but statistically significant effect indicating poorer emotion perception by ASD-diagnosed individuals compared with matched non-ASD groups. In contrast, in a review of studies of children with a diagnosis of ASD but no other disability (i.e., excluding those with a co-diagnosis of intellectual disability), Begeer et al. (2008) found that children with ASD did not differ from age-matched controls without ASD in basic emotion perception skills. They concluded that poorer performance previously reported for unselected groups with ASD was, therefore, most likely attributable not to ASD per se but rather to the intellectual delay that accompanies ASD in many cases. The third review, by Nuske, Vivanti, and Dissanayake (2013), showed that emotion processing impairments are not universal in ASD, as indicated by variability across participants and emotion testing procedures, and are not specific to perceiving emotion but also apply to the perception of other types of stimuli as well. All three reviews nevertheless agreed on one thing: Methodological limitations cloud much of the existing empirical evidence so seriously that further studies, especially of children, are urgently needed. As Uljarevic and Hamilton (2013) concluded, “Despite over 20 years of research the status of emotion recognition in ASD remains uncertain” (p. 1524). At least three specific methodological issues highlighted by these reviews are in need of further clarification. First, the overwhelming focus has been on adult or older adolescent samples, leaving the question of children’s emotion perception especially uncertain. For example, of the 48 studies that met Uljarevic and Hamilton (2013) criteria for meta-analysis, only 14 (29%) included children with ASD aged 12 years or younger. Second, Uljarevic and Hamilton highlighted the unacceptably small sample sizes of many past studies. Only 4 of the 14 studies of child samples (i.e., 8% of the total reviewed) had sample sizes of at least 15. A third limitation concerns the types of stimuli used to assess emotion perception in past research. The vast majority of previous studies have presented either the eyes alone or faces including eyes to portray the target emotions. However, as noted by Nuske et al. (2013), general difficulties that individuals with ASD often have with the processing of facial stimuli may constrain their recognition of emotion conveyed by eyes or full faces. Thus, to address questions about emotion perception in ASD at the broadest level, it will be valuable to use both facial and non-facial emotion stimuli. The main goal of the current pair of studies was to address these past limitations by examining children’s perception of emotion in body postures with a large sample of 67 children with ASD and 72 appropriately matched controls. In both studies, we systematically compared the ability to recognize emotions in body postures (“body-reading”) with the ability to recognize emotions expressed in the eyes (“eye-reading”) in children with and without ASD while examining possible links with age, intelligence, empathy, and theory of mind (ToM) understanding in both groups. To do so, we developed a new test of children’s ability to recognize emotions via static body postures. Because this is the first study we know of to systematically compare body-reading with eye-reading in children with and without ASD, a brief review of the evidence for each ability follows.