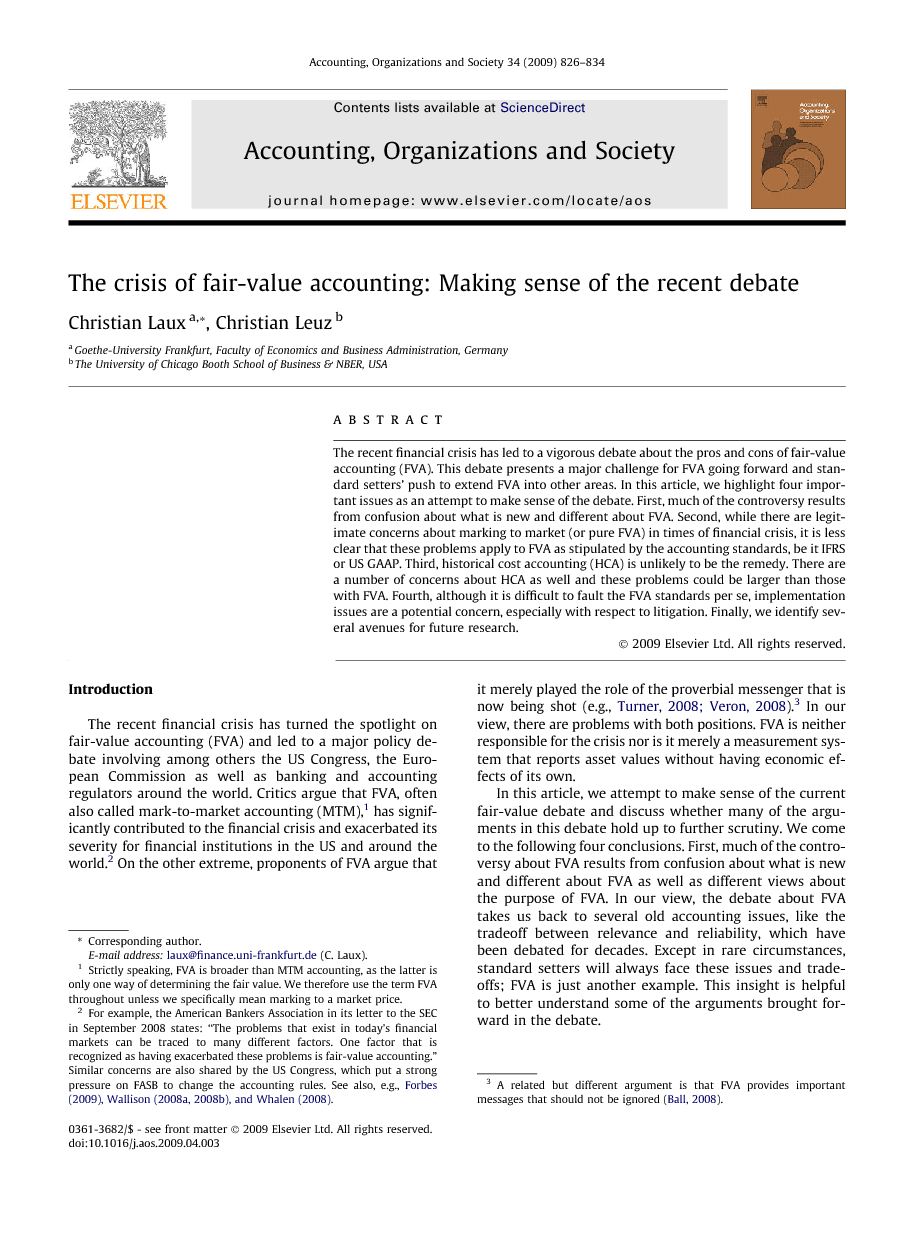 The recent financial crisis has led to a vigorous debate about the pros and cons of fair-value accounting (FVA). This debate presents a major challenge for FVA going forward and standard setters’ push to extend FVA into other areas. In this article, we highlight four important issues as an attempt to make sense of the debate. First, much of the controversy results from confusion about what is new and different about FVA. Second, while there are legitimate concerns about marking to market (or pure FVA) in times of financial crisis, it is less clear that these problems apply to FVA as stipulated by the accounting standards, be it IFRS or US GAAP. Third, historical cost accounting (HCA) is unlikely to be the remedy. There are a number of concerns about HCA as well and these problems could be larger than those with FVA. Fourth, although it is difficult to fault the FVA standards per se, implementation issues are a potential concern, especially with respect to litigation. Finally, we identify several avenues for future research.

The recent financial crisis has turned the spotlight on fair-value accounting (FVA) and led to a major policy debate involving among others the US Congress, the European Commission as well as banking and accounting regulators around the world. Critics argue that FVA, often also called mark-to-market accounting (MTM),1 has significantly contributed to the financial crisis and exacerbated its severity for financial institutions in the US and around the world.2 On the other extreme, proponents of FVA argue that it merely played the role of the proverbial messenger that is now being shot (e.g., Turner, 2008 and Veron, 2008).3 In our view, there are problems with both positions. FVA is neither responsible for the crisis nor is it merely a measurement system that reports asset values without having economic effects of its own. In this article, we attempt to make sense of the current fair-value debate and discuss whether many of the arguments in this debate hold up to further scrutiny. We come to the following four conclusions. First, much of the controversy about FVA results from confusion about what is new and different about FVA as well as different views about the purpose of FVA. In our view, the debate about FVA takes us back to several old accounting issues, like the tradeoff between relevance and reliability, which have been debated for decades. Except in rare circumstances, standard setters will always face these issues and tradeoffs; FVA is just another example. This insight is helpful to better understand some of the arguments brought forward in the debate. Second, there are legitimate concerns about marking asset values to market prices in times of financial crisis once we recognize that there are ties to contracts and regulation or that managers and investors may care about market reactions over the short term. However, it is not obvious that these problems are best addressed with changes to the accounting system. These problems could also (and perhaps more appropriately) be addressed by adjusting contracts and regulation. Moreover, the concern about the downward spiral is most pronounced for FVA in its pure form but it does not apply in the same way to FVA as stipulated by US GAAP or IFRS. Both standards allow for deviations from market prices under certain circumstances (e.g., prices from fire sales). Thus, it is not clear that the standards themselves are the source of the problem. However, as our third conclusion highlights, there could be implementation problems in practice. It is important to recognize that accounting rules interact with other elements of the institutional framework, which could give rise to unintended consequences. For instance, we point out that managers’ concerns about litigation could make a deviation from market prices less likely even when it would be appropriate. Concerns about SEC enforcement could have similar effects. At the same time, it is important to recognize that giving management more flexibility to deal with potential problems of FVA (e.g., in times of crisis) also opens the door for manipulation. For instance, managers could use deviations from allegedly depressed market values to avoid losses and impairments. Judging from evidence in other areas in accounting (e.g., loans and goodwill) as well as the US savings and loans (S&L) crisis, this concern should not be underestimated. Thus, standard setters and enforcement agencies face a delicate tradeoff (e.g., between contagion effects and timely impairment). Fourth, we emphasize that a return to historical cost accounting (HCA) is unlikely to be a remedy to the problems with FVA. HCA has a set of problems as well and it is possible that for certain assets they are as severe, or even worse, than the problems with FVA. For instance, HCA likely provides incentives to engage in so-called “gains trading” or to securitize and sell assets. Moreover, lack of transparency under HCA could make matters worse during crises. We conclude our article with several suggestions for future research. Based on extant empirical evidence, it is difficult to evaluate the role of FVA in the current crisis. In particular, we need more work on the question of whether market prices significantly deviated from fundamental values during this crisis and more evidence that FVA did have an effect above and beyond the procyclicality of asset values and bank lending. The paper proceeds as follows. First, we provide a quick overview over FVA and some of the key arguments for and against FVA. Second, we compare FVA and HCA and shortly discuss fundamental tradeoffs involved when choosing one or the other. Third, we discuss the concern that FVA contributes to contagion and procyclicality as well as ways to address this concern, including how current accounting practices help to alleviate problems of contagion. Fourth, we consider potential implementation problems. Fifth, we take a closer look at the banks’ positions on FVA. Sixth, we conclude with suggestions for future research.