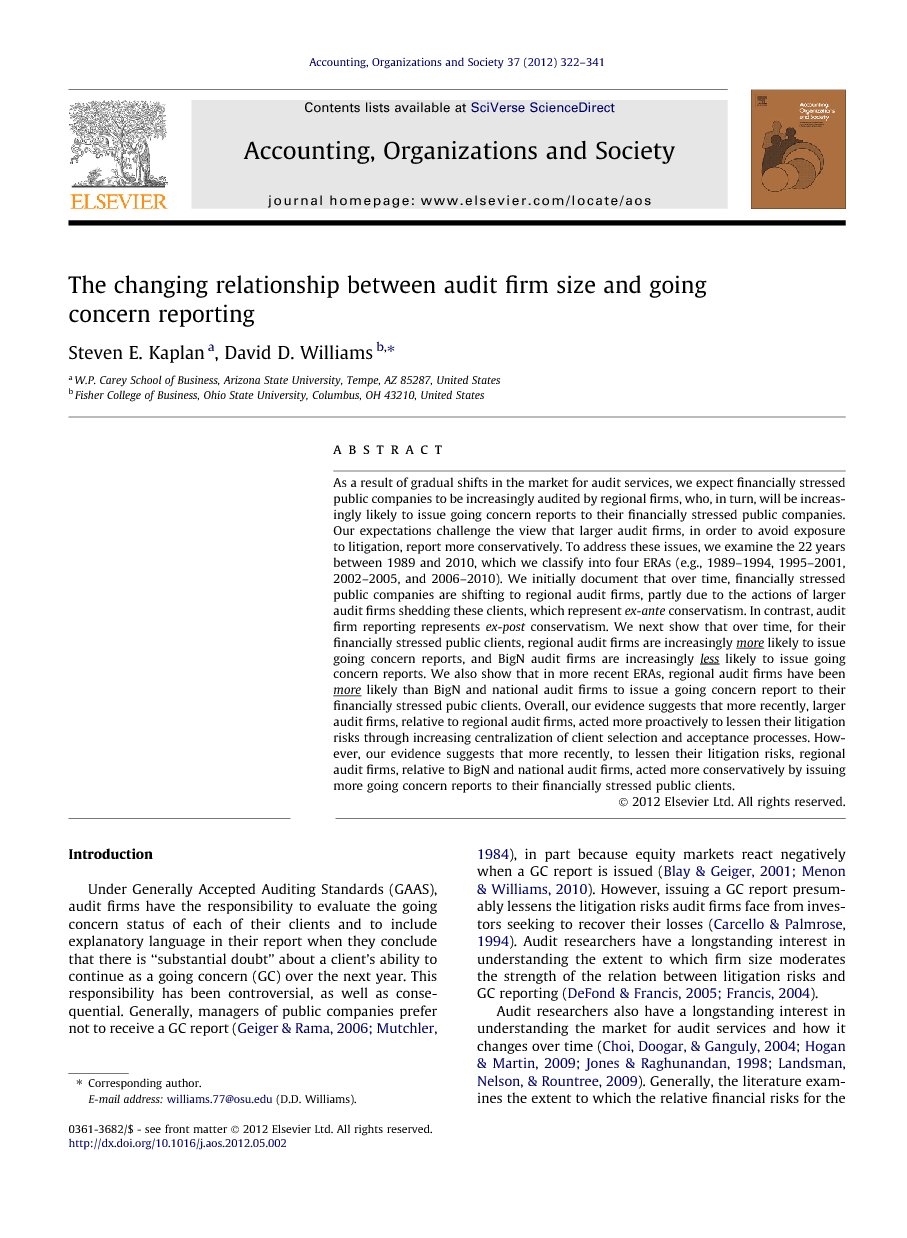 Under Generally Accepted Auditing Standards (GAAS), audit firms have the responsibility to evaluate the going concern status of each of their clients and to include explanatory language in their report when they conclude that there is “substantial doubt” about a client’s ability to continue as a going concern (GC) over the next year. This responsibility has been controversial, as well as consequential. Generally, managers of public companies prefer not to receive a GC report (Geiger and Rama, 2006 and Mutchler, 1984), in part because equity markets react negatively when a GC report is issued (Blay and Geiger, 2001 and Menon and Williams, 2010). However, issuing a GC report presumably lessens the litigation risks audit firms face from investors seeking to recover their losses (Carcello & Palmrose, 1994). Audit researchers have a longstanding interest in understanding the extent to which firm size moderates the strength of the relation between litigation risks and GC reporting (DeFond and Francis, 2005 and Francis, 2004). Audit researchers also have a longstanding interest in understanding the market for audit services and how it changes over time (Choi et al., 2004, Hogan and Martin, 2009, Jones and Raghunandan, 1998 and Landsman et al., 2009). Generally, the literature examines the extent to which the relative financial risks for the portfolio of public clients differ by audit firm size and changes to these financial risks over time, but links to going concern reporting are limited (Francis & Krishnan, 2002). Thus, further research is warranted on how changes in the market for audit services impact GC reporting decisions among differentially sized audit firms. The purpose of the current study is to provide longitudinal evidence on the changing relationship between audit firm size and auditor going concern reporting. Our longitudinal analysis examines 22 years divided into four ERAs. The years 1989–1994 represent the first ERA preceding passage of the Private Securities Litigation Reform Act (PSLRA). The years 1995–2001 represent the second ERA, following the PSLRA, but preceding the Sarbanes–Oxley (SOX) legislation and the demise of Arthur Andersen. The years 2002–2005 represent the third ERA, which includes the immediate years after SOX while audit firms and public companies were responding to these dramatic changes. The years 2006–2010 represent the fourth ERA, which includes the time when audit firms and public companies largely adjusted to temporary shocks in the audit environment occurring in 2002. Our study focuses on three classes of audit firms (e.g., BigN, national, and regional1) across four different ERAs. Over time, we expect that financially stressed public companies will increasingly be audited by regional audit firms, who in turn will increasingly report more conservatively as demonstrated by a higher propensity to issue a GC audit report. In addition, among financially stressed public companies still audited by BigN audit firms, we expect a decreasing likelihood of receiving a going concern report over time (e.g., less conservative GC reporting). Overall, at some point, regional audit firms are expected to be more likely to issue a going concern report compared to larger audit firms. Our findings generally support these predictions. We document that across the ERAs, financially stressed public companies are increasingly audited by regional audit firms. Specifically, our evidence indicates that regional firms only audited approximately 16% of financially stressed public companies in the first two ERAs, but over 30% in the last two ERAs. While a variety of factors are involved, this change reflects, in part, a decreasing willingness by larger audit firms to audit financially stressed public companies. The BigN audit firms began using more formal firm-wide screening practices in the early 1990s (Arthur Andersen et al., 1992) and over time, placed more emphasis on formal firm-wide screening as a means to avoid associating with “risky” audit clients (Bell et al., 2002 and Winograd et al., 2000). These screening practices focus, in part, on financial stress, which is generally observable to the audit firm and also associated with audit litigation (Latham & Linville, 1998). We also document that for their financially stressed public companies, regional audit firms were more likely to issue a GC report in the latter ERAs, whereas BigN and national audit firms were increasingly less likely to issue a GC report. Krishnan, Raghunandan, and Joon (2007) refer to the use of audit reporting to control their firm’s exposure to litigation risks as ex-post conservatism. Results are generally similar for an analysis of Type I accuracy (e.g., issuing a GC report to a client that becomes bankrupt in the subsequent year). In the case of regional firms, we believe this change reflects, in part, increases in regional firms’ exposure to catastrophic litigation costs (Francis & Krishnan, 2002). We also believe the change among BigN firms reflects, in part, increases in BigN firm reliance on client screening as a mechanism to control their firm’s exposure to litigation risks. Krishnan et al. (2007) refer to the use of client screening for this purpose as ex-ante conservatism. Our study offers important contributions to the audit markets and to the GC reporting literatures. Specifically, the results of our study extend existing longitudinal auditing research on portfolios (e.g., Choi et al., 2004, Francis and Krishnan, 2002, Hogan and Martin, 2009 and Landsman et al., 2009). Our evidence considers a long time horizon, more current data, and three categories of audit firms, which allows us to assess the effects of gradual changes in the audit environment on both the market for audit services and GC reporting. Our evidence is particularly important because it shows that in more recent time periods, BigN audit firms did not issue GC reports more conservatively than smaller audit firms for financially stressed public companies. Instead, in more recent time periods our evidence shows that for financially stressed public companies, regional firms issued GC reports more conservatively than did BigN and national audit firms. The remainder of this paper is organized as follows. The next section discusses the auditing environment and develops the hypotheses. The third section describes the research methods and presents our results. The last section provides a discussion of our results.